September - Painting one mini at a time - part ten 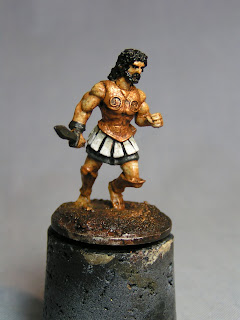 In this update you can see how I have continued to add paint to this 40mm Spartan Miniatures Hero. 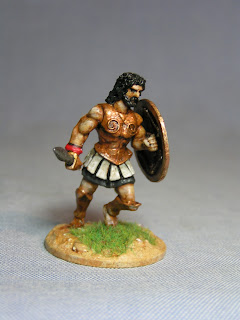 After painting the base and the shield I varnished the mini with both gloss and matt varnish before adding static grass decoration to the base. 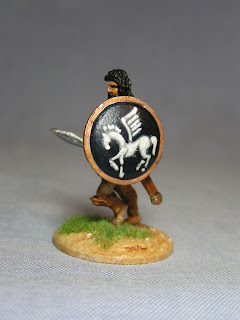 Another metal miniature saved from the Lead Mountain and ready to add to my collection of painted Greek warriors. Stay safe and

Keep calm and Carry On Modelling

September - Painting one mini at a time - part nine 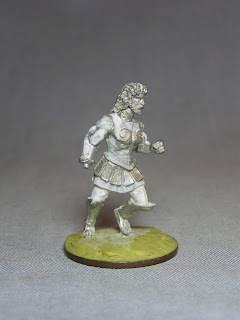 Another 40mm Spartan Miniatures model. This time one of the heroes. The model was mounted onto a pre-decimalisation penny and the groundwork was built up with Milliput epoxy putty. I then used some Vallejo modelling putty to hide seams and smooth out areas of the armour.

I have found that the Spartan Miniatures sculpts are of varing quality - the main group of modular Hoplites (body and lower legs as a one piece casting and then head and arms can be added) are better sculpts while the heroes, see above are more 'two dimensional' and can look very flat from certain angles. 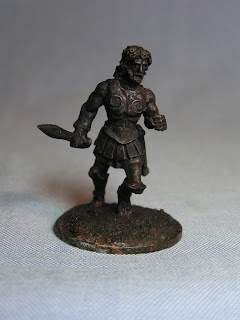 The figure was undercoated with Tamiya spray primer and then basecoated with a black/brown base. 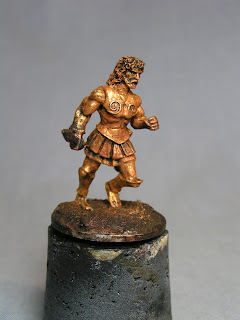 The metallic areas were painted first with a bright gold colour which was 'washed' to bring out the sheen and detail. 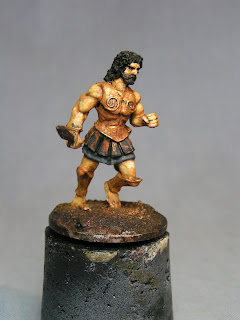 Then it was onto the flesh areas which were painted in my usual Barbarian Leather/Snakebite Leather base and highlighted in layers before being washed with a flesh wash. It has been great fun searching through my Lead Mountain and finally getting around to painting these metal miniatures.

I'll post more images and details later, but for now, stay safe and 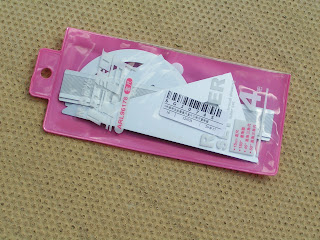 I purchased these metal drawing tools from E-bay earlier this year. The purchase was made after reading a plea on The Lead Adventure Forum, see this link. I already had a larger metal square that I had purchased from Flying Tiger some time ago, but this set was too much of a bargain to miss out on. For details of where I bought them see this link.

I use the metal squares when scratch building in plastic card. The metal tools can be used to both mark and cut the plastic card without any danger of damaging the edges (unlike the plastic drawing sets). In addition you can use them as guides when gluing plastic card together as the solvent will not effect the metal. However my Flying Tiger square is now a little worse for wear as I tend to abuse it. 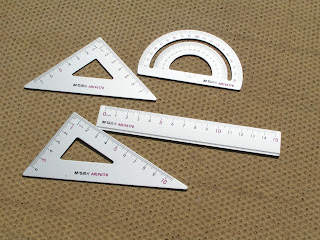 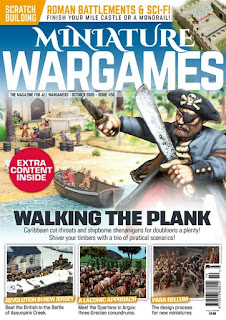 Miniature Wargames issue 450 (October 2020) has the second part of my tutorial/article showing how I scratch-built and painted a 28mm scale Roman Mile Fort that was in turn inspired by the ancient Airfix kit. Details of part one can be found here. In part two I show how I finished and painted the fort.

Here are a couple of images of the finished model - for more details of MW, see this link. 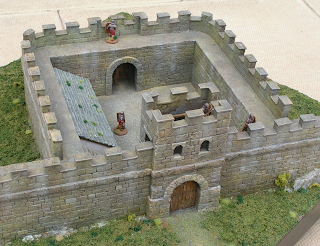 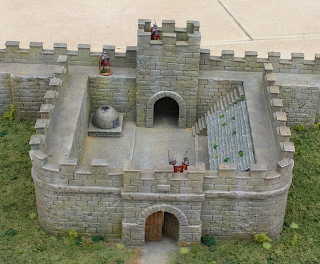 September - Painting one mini at a time - part eight 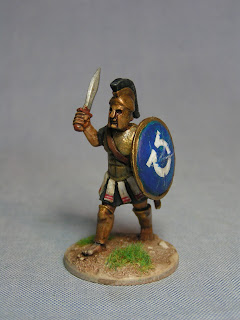 Two more 40mm Spartan Games Hoplites - The first is this blue shield figure - can you guess where I got the shield design from? 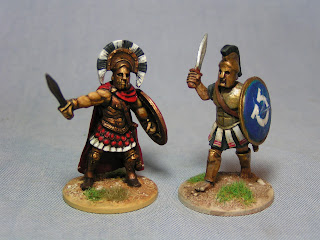 And this black leather clad soldier with a hand painted shield design and a much more dynamic pose. 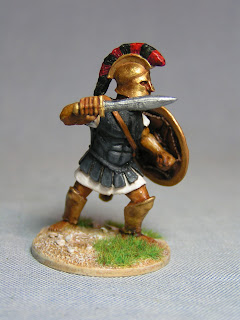 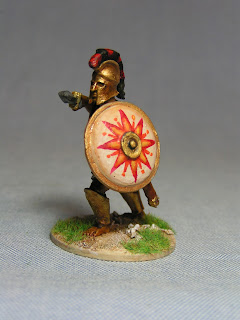 Both are mounted onto pre-decimalisation pennies with the bases built up from Milliput. I still have a couple of bare metal minis on my to-do list, but now I have enough painted figures for a game. Stay safe and 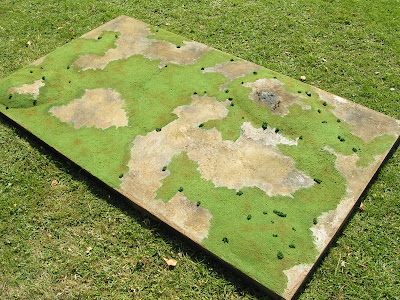 Over the last couple of months I have been able to spend more time in the garden and on my hobby. I've written magazine articles and searched through my Lead Mountain to pick-out miniatures to model and paint. One of my larger projects was to up-date my well-used gaming table. The image above shows the finished table or table topper.....

The table was built many years ago from three panels of white polystyrene packing material (used to protect display fridges during transit) with a strip-wood frame or surround. The gaming surface was first covered with manilla envelopes torn into small sections and glued in place with PVA glue then painted green. Over the years I have added layer after layer of railway scatter material or dyed sawdust. Images of the gaming table have appeared throughout the Blog.

Here is an image of the bottom of the table. Note the torn newspaper sections which have two uses - firstly; they are repairing damaged sections of the exposed foam and secondly; they help to secure the two wooden battens which were added to strengthen the polystyrene panels and stop 'bowing'. 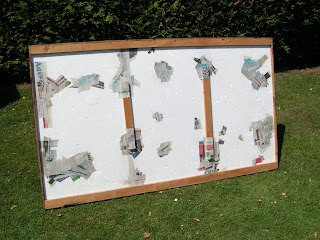 My first job was to sand the surface and remove any obvious rough areas. Over the years of use and adding more dyed sawdust the main surface was far from flat!

I added three areas of high ground. These were built from more polystyrene. The first (top right and covered in white filler) was a domed hill with the top cut off. Like the main board this was built many years ago but had not been used for ages. The second area (also to the right and just below the domed hill) was the section that I had cut off the top of the domed hill. And thirdly a much larger and flatter hill (bottom left). All three hills were glued in place with No More Nails and further secured with cut-down cocktail sticks pressed into the hills and board surface. I smoothed the transition from flat board to hill with both ready-mixed filler and Modelling Compound from Gaming Geek.

As you can see there were other areas of filler added to the sawdust covered board. these were where the surface had been damaged or I wanted to smooth out any deep ruts. 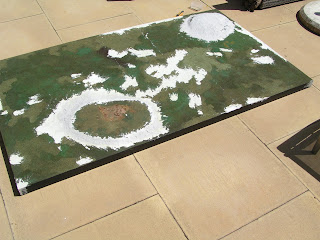 Once the new surface had been added I painted the whole board in muted browns and pale greens. I used both a large paintbrush and my airbrush for this. 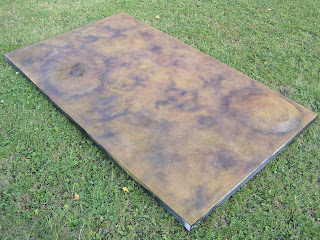 Later I searched through my many part bags of flock and ground foam and mixed them all together to produce a more natural looking, multi-coloured mix and applied this over a patchwork of PVA glue. 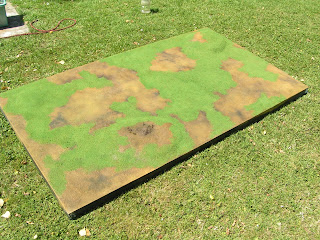 The final steps were to 'blend' different areas my Paasche H model airbrush and add some areas of ground foam. Here you can see the finished board with the edges painted satin black - the image was taken in strong sunlight. 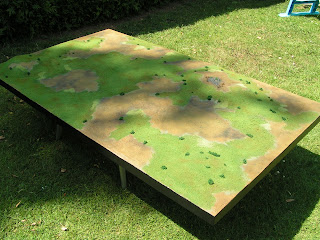 The gaming table or table topper gaming board is 1700mm long x 990mm wide. It is extremely light, being built from just strip-wood and plain white expanded polystyrene.

I have yet to game of the new board and don't look forward to re-flocking my terrain pieces (they are all edged in plain dyed sawdust to blend in with the old gaming surface - they will need to be updated and I will do this as and when they are needed or I have time). I hope you like the new gaming surface - I do. But for now - stay safe and

September - Painting one mini at a time - part seven 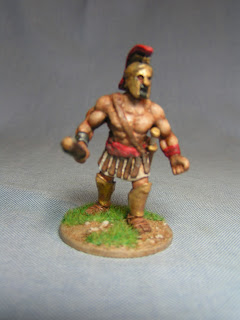 Another 40mm scale miniature for my Typhon project - this time Hercules a conversion using the lower body from a 40mm Spartan Miniature, the body from a HeroClix miniature - Hercules (from Secret Invasion Marvel) and the head from the Spartan Miniature set. I used Green Stuff to 'blend' the various parts and a pre-decimalisation penny for the base. 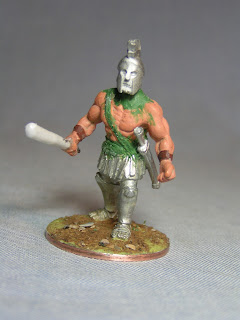 The club was modelled from some 3mm plastic card and 'pinned' into the hand before being superglued. 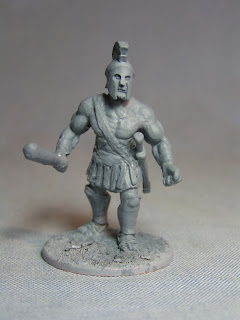 After a Tamiya spray coat primer was applied, the flesh areas were built up over a brown wash. 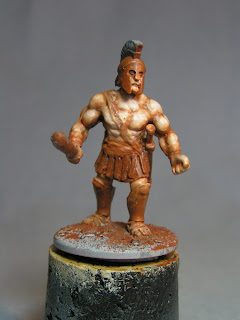 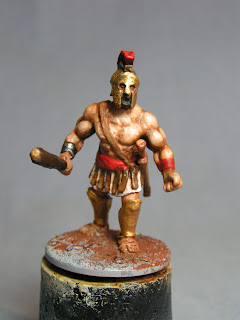 The figure was both gloss varnished and then matt varnished before I added some static grass to the base. 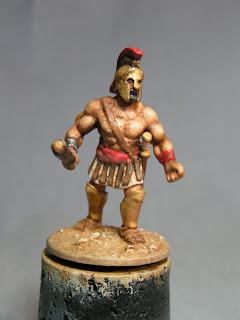 The final image shows my converted Hercules and The Nemean Lion (another conversion - using a plastic zoo lion and some Milliput). 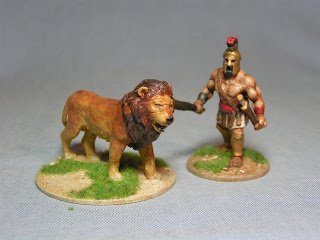