On-Line Build. A Quartet of Goblins from December 2012 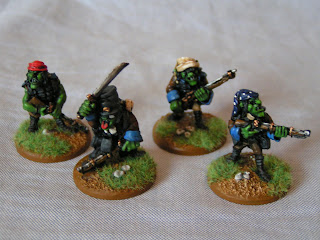 First published back in December 2012 on Orcs in the Webbe. This particular article was badly corrupted and had lost many of the original images I though it was time to update it and include it on these pages. For full details of the original see this link

To supplement my existing collection of Goblin Cacadores and to include some additional Goblins for the soon to be released Bridge on the River Que update, I ordered a pack of 1st Cacadores (53001) from Alternative Armies. This is a record of how they were based and painted. 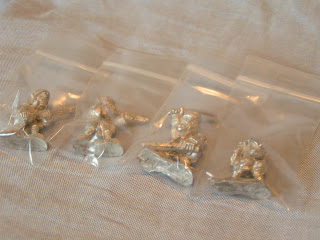 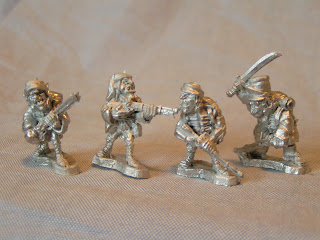 The castings were very crisp and although they did need some minor cleaning up - I was very impressed by the quality. 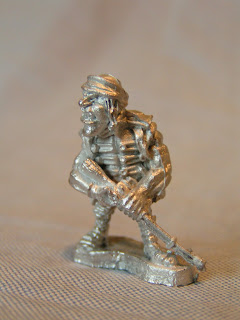 Throughout this tutorial I will be showing step-by-step images of both the whole group of four Goblins and this particular miniature in the hope that it will make things a little clearer for the viewer. 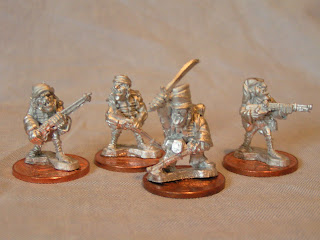 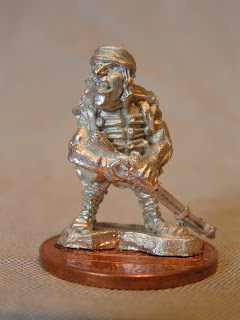 After the castings had been cleaned up and odd pieces of metal flash had been removed, I sanded the bases flat and glued them onto 2 pence coins with superglue. 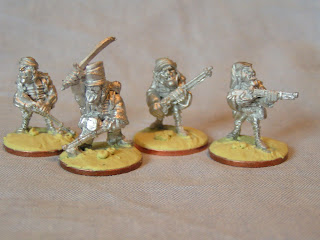 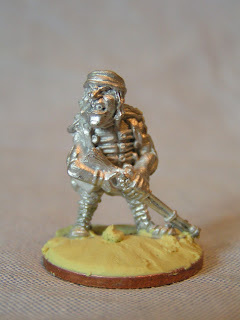 The bases were built up with Milliput (standard Grey/Green) epoxy putty. 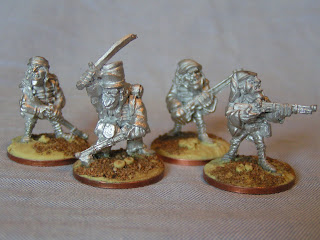 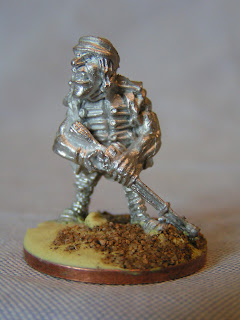 When the Milliput had fully dried, I added some sieved sand over a thin coat of PVA Glue. 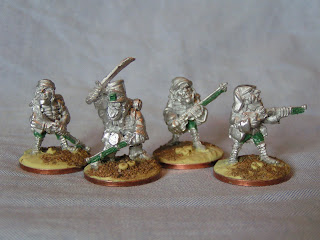 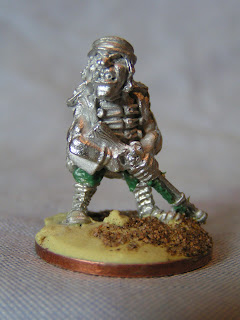 I felt that the figures needed some Green Stuff work, adding substance to the rifles and building up the trousers. 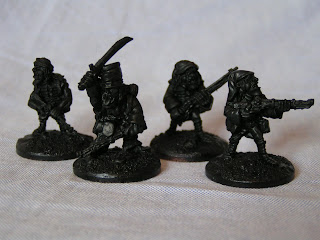 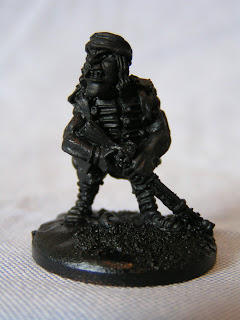 The figures were basecoated with black spray paint (a rattle-can bought from Poundland for just £1.00) and touched-up with GW black acrylic paint. 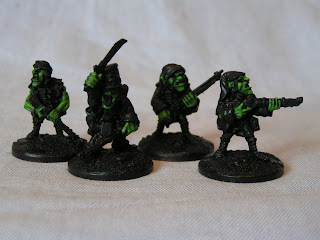 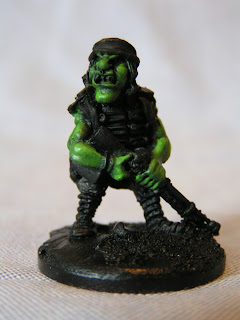 As with all of my Flintloque miniatures I started with the flesh areas first, being green-skinned the colours are a little different from the norm but the technique is the same. I started with a rough first coat of Foundry Forest Green (26B) and built up the subsequent 'flesh tones' by adding Warzone Venuzian Green (a light Yellow/Green that is no longer available). When dry I washed the flesh areas with Citadel Thraka Green and tidied up the Chaos Black areas prior to taking the photos. 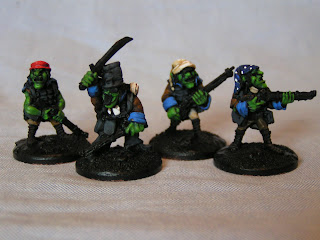 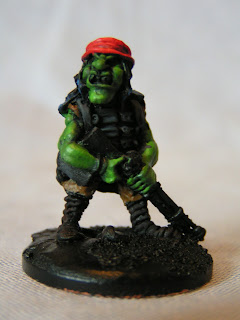 In these images you can see that I have moved ahead a little further than is ideal for a tutorial. The brown uniform colour is a mix of Vallejo Game Color Charred Brown with a touch of GW Chaos Black and a drop of Vallejo GC Bloody Red. The uniform colour is then highlighted with GW Snakebite Leather.
The black trim is Chaos Black highlighted with Chaos Black/Foundry Charcoal Black (34B).
The blue cuffs are a mix of GW Midnight Blue and GW Regal Blue, with just a tiny touch of Skull White added for the final highlight. 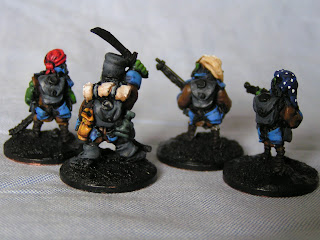 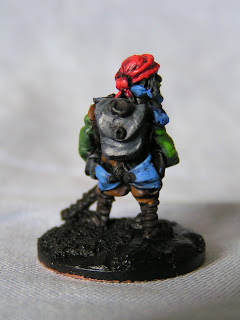 The rear of the figures and how the knapsacks were painted with GW Chaos Black and Foundry Charcoal Black. 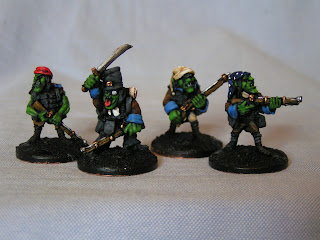 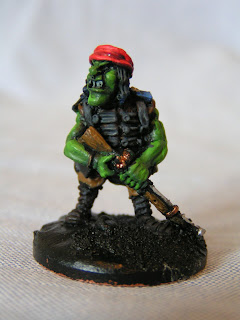 With the main painting finished. I have used GW metallic for the metal parts which I feel are some of the very best metallic paints available and highlighted them in the same manner as non-metallic or normal acrylic paints. 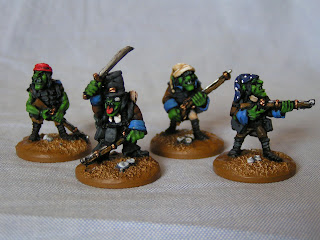 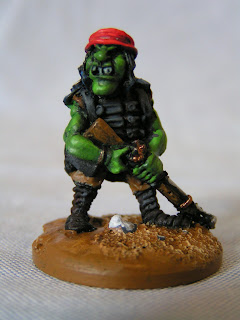 The bases have been painted in my usual colour scheme of GW Snakebite Leather, highlighted with Snakebite and Skull White. The odd stone has been picked out in dark grey and highlighted by adding white to the mixture. 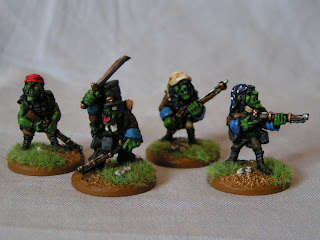 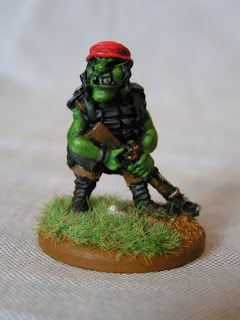 Varnishing. First a coat of Ronseal Gloss Varnish, then three coats of Galleria Matt Varnish (into which I have added some Tamiya Matt Medium).
The green static grass is sprinkled over PVA glue and when dry the excess is blown off.
In summary – I am pleased with both these and my earlier based and painted Cacadores but still feel that I could have captured the green skin tones better. I should also thank Billybonesworkshop for the inspiration. His beautifully painted Goblin Cacadores that appeared on e-bay earlier this year are some of the very best painted Flintloque figures I have ever seen.

Another 'lost' article from Orcs in the Webb re-written and updated here on this Blog. To see the original OITW article go to this link.

I really should try to get the earlier (eight Goblin) tutorial uploaded to this site.