The Witcher - the Netflix series 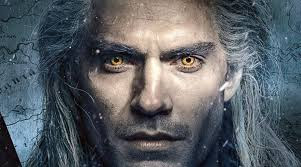 Sue and I have just finished watching the first series of The Witcher on Netflix. We had seen some reviews prior to starting the series, but recommendations from my son and daughter prompted us to start watching it - and I have to say that we have enjoyed all of the first 8 episodes and are looking forward to series 2.

I did not have any preconceived ideas about the character of the series as I had not read any of the books or played the game. I do think I had heard of it, maybe on gaming or entertainment sites.

The story does play around with the timeline quite a bit but in the end, I think we followed it close enough. I would say that there are some fantastic characters in series 1, but if Henry Cavill was paid by the word, I don't think he would be earning that much (grunts are a totally different matter.....) Even so I would say that he does pull it off and makes a convincing anti-hero.

I would say that it is a good series (if a little short) and well worth searching out.

My wife and I loved the series also, having no preconceived idea of what it was about. Looking forward to the second series also.

I thought it was an interesting premise and looked good. But so slow - took 8 episodes to go not very far. I also found the constant shifting forward and back in time very annoying. Bit of a wasted opportunity?

I was of the opinion that it was a bit 'meh', a tad dull really. I agree a bit slow and a missed oppurtunity too. Henry Cavell is fine in the part but the storyline really isn't much about the Witcher, he's just sort of there a lot of the time. Drifted off and didn't bother by around ep 4.