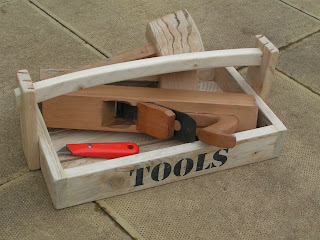 This is something of a change from my usual Blog posts. Over the last year and particularly during lockdown, I have enjoyed searching You Tube and watching various tutorials about restoring old tools. One of my favourite sites has been a channel called Scout Crafter and this month, he has offered up a challenge; To build a Tool Tote, a simple wooden tool box.

As regular readers will know, I spent some time last year building a whole range of different totes, trugs and crates which were later given away as Christmas presents, this link and the image below shows some of the many examples I built. I estimate that during the later part of 2020, I built over a dozen different examples. 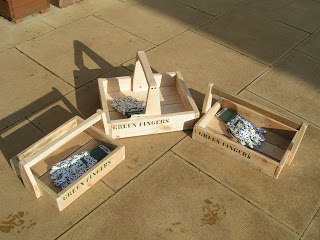 I chose some ex pallet wood as the starting point for my tote. The wood has been stored in my shed for a number of months and so should be dried out. As you can see the quality of the planks was not great, but I wanted to use wood I had to hand rather than go out and purchase new product for this challenge. Each plank was 70mm wide x 20mm thick. 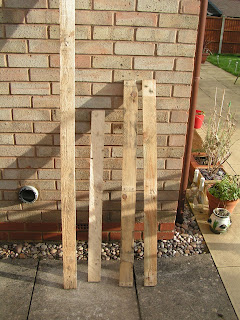 I don't work from plans, prefering to build product to fit with what wood I have to hand and this tote was no exception. The basic box is 450mm long x 280mm wide and 70mm deep. In the image below I have laid out the seven seperate parts ready for finishing with my sander. 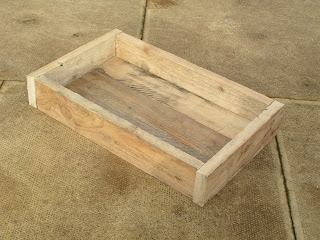 After sanding the individual pieces, I have both nailed and glued the bits together, checking that they are 'square' by building the tote on a paving slab base and using a set square. I used standard woodworking glue and the nails that were removed from the pallets which I had kept when dismantling them. Each nail was straightened and had the round head removed with a set of heavy-duty pliers. The nails were then enserted into pre-drilled holes as previous experience had shown me that this poor quality wood has a tendancy to split if nailed together too close to the edges. I then punched the nail heads below the surface of the wood. 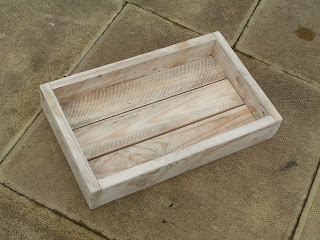 I chose to build the tote with a curved handle, which tenons into two uprights. The curve was drawn and cut by eye and then sanded to shape before being fitted. The two uprights were both screwed and glued in place and another cut-down nail was inserted through the upright and into the handle to secure it.
Any gaps or screw heads plus the nail holes were filled with Milliput two part epoxy putty. 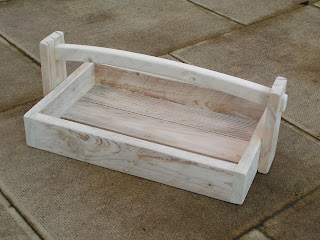 I then spent an afternoon hand sanding the tote to both improve the look and remove any hard edges. I applied the TOOLS logo by hand painting each letter in a dark grey colour and then used some clear wood wax/polish to finish the Tool Tote. 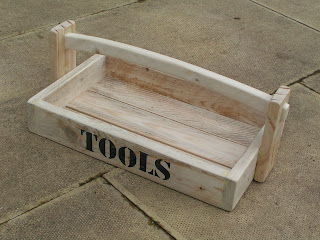 For full details of the Scout Crafter Tote Challenge, see this You Tube video.
The tote was built over a perior of two days, working in the garden and taking advantage of a break in the cold weather. The tote was built from scrap material and cost nothing but time to make, time I was more than happy to spend outdoors.
I have used a number of electrical tools during the build;
A Chop Saw (on loan from my son)
An Electric Drill - my 'old faithful' - a Black & Decker Hammer Drill
An Electric Sander - now on it's last legs, but still able to smooth out this ex pallet wood
A Bosch Jigsaw
Why don't you try out this challenge?
Tony
Posted by Tony at 02:26