Following a couple of interesting posts on The Notables Yahoo Group site I thought I would add some hints and tips on how I use 'Green Stuff'. 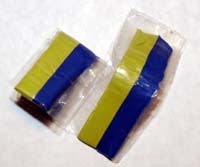 1 I buy 'Green Stuff' little and often as I have heard that it can go 'off'. I have only once encountered this and cannot confirm if the fact that the putties did not mix properly was down to age, poor storage or just getting a 'bum' batch.

I have read reports that Kneadatite can be stored in the fridge to preserve it's life (even in the freezer). I tend to store it in a zip-lock bag and in the dark!

2 I also cut out the small part of the Blue/Yellow ribbons that join or touch. Once again I am aware that other sculptors do the same. I am not sure there is any truth in the fact that this contact point is any more difficult to mix properly, but I still cut it out and discard it - after all you are only talking about a strip less than 0.5mm thick.

3 I try to mix the two part equally, there are some reports that you can change the properties if the mixes are varied, for example;
More yellow and a stickier putty plus a slower setting time,
More Blue and a quicker setting time

I suggest that anyone wanting to experiment sets up a couple of test mixes and record the results.

4 Over the last two years I have found that mixing Milliput, the standard Milliput or Yellow/Grey with Green Stuff gives a firmer setting epoxy putty, I have varied the mix, but have used up to 50 - 50 Green Stuff - Milliput. This is particularly true for sculpts that need a little more 'body' for example, flowing robes or weapons, while body-hugging uniforms, buttons or super detail is best done with 100% Green Stuff.

Other epoxy putties can be used in place of Milliput - for example when sculpting 'dollies' I regularly use cheap Plumber's two part (5 minute) epoxy putties with Milliput and Green Stuff to speed up setting times.

5 For small details - don't be afraid to use superglue to attach them, particularly true of small buttons. I use a cocktail stick to place the glue and attach the green stuff with a sculpting tool or scalpel.

6 I use the 'spear headed' sculpting tool for over 90% of all my sculpting - I am aware that others like the knife edged tool. Each to his own.....

7 Green Stuff will set in about 90 minutes, but needs 24 hours to fully set. This setting time can be speeded up by placing the sculpt in a warm or hot place. I have read about people using desk lamps. I place my sculpts in a fan assisted oven (I have a very understanding Wife). Always set the temperature to VERY low or you can easily cook the miniature - I know, I've done it a number of times. I also set the oven timer usually no more than 7 minutes.

8 I find that plain water is enough lubrication. I have seen reports of other sculptors using Vaseline and even their own saliva, but water is good enough for me!

9 Build up larger sculpts a bit at a time. I think we have all tried to finish a miniature too quickly and the detail is either squashed or covered in huge finger prints! Building up the base, then the rough shape and then the detail sculpting is so much easier than trying to do it all in one go.

10 Finally - be patient, Green Stuff requires a great deal of setting time. Try working on more than one project at a time, rather than destroying detail by trying to finish a model too quickly.

The hints and tips listed above are just my own personal experiences, I am sure there are many who can add to this list - Please do!

Additional notes;
"Green Stuff comes in two parts: the blue hardener, and the yellow resin. By mixing these together you will create a green modelling putty." White Dwarf 321, page 84, The Balrog

"Chris twists the putty together rather than kneading it to help produce a better consistency." (I prefer to fold the putty, occasionally twisting it). Chris also recommends keeping the sculpting tool wet, so the Green Stuff sticks to the model rather than the tool. Chris Straw, GW sculptor, White Dwarf 304, page 102, Orc Instruction

"I cut mine into 1cms strips and never have more than 10 or so out at a time, you can freeze Green Stuff - it keeps for longer". Rob Alderman, The Notables Yahoo Group, message 11316

"I use a 'chap-stick' (lipstick like applicator to stop chapped lips) on my fingers and tools to keep it from sticking, washing your model before painting will remove any residue. Green Stuff can be mixed with 'Sculpey' to prolong the drying/setting time." Taken from 'fromthewarp', Working with Green Stuff, a how to.

"Green Stuff is extremely soft right after it is mixed, and many people find it too difficult to use when it is so soft, so you may want to let your mixed Green Stuff sit for 15 minutes or so before trying to sculpt with it. Experiment a little and see what works best for you." Introduction to Green Stuff by Chris Cates at Gallery Workshop.

"The big problem with Green Stuff is that it sticks to everything. This problem can be overcome by ensuring that your hands, tools and the area that you are mixing your Green Stuff are wet. After you have applied your Green Stuff, leave it for about twenty minutes, as it's much easier to sculpt." and "Top Tip; You can achieve a very smooth finish on Green Stuff by brushing over it with a wet brush." both tips from White Dwarf issue 298.

I recently read an article by Bill Horan who says that Duro (Green Stuff) should be mixed to a ratio of 60% Yellow and 40% Blue. Bill uses a range of very simple sculpting tools - wooden toothpicks which he coats in one, two or three layers of superglue before sanding them to shape - either pointy or blunt. His only other sculpting tool is a scalpel.
Posted by Tony at 09:25

Useful tips. I only use greenstuff for small details and it can be tricky to use. I never thought of mixing it with Miliput. Good idea.

All excellent tips there.
Patience is the biggest thing I think when using the stuff.

Ron
From the Warp

Thanks for the tips, I'm sure they'll come in handy.

Good post and excellent tips about a much used product.

Rob Alderman - of Flintloque fame has started to produce You-Tube tutorials which are well worth checking out. See;

Another article worth linking too.....