With the well, paved base and carved wall finished I looked around for a suitable backdrop. I had thought about building it into a foam hill, but this would have made it huge! Searching my garage I came across a small resin base, 35cms x 35cms which I picked up some time ago. I have no idea what it was originally used for but I would guess that it was some sort of desk top or counter top display.
I mounted the well onto a rough slab of cardboard and built up the rock face with broken portions of White packing-case Foam. I used a hot glue gun and some cocktail sticks to reinforce the joints.
Photos One and Two - The foam rock-face finished. I mounted the well at a slight angle, thinking that it would look more natural, however I now think that it might have 'sat' better if mounted in line with the base edge. It took about 20 minutes to complete. 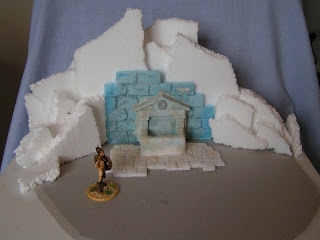 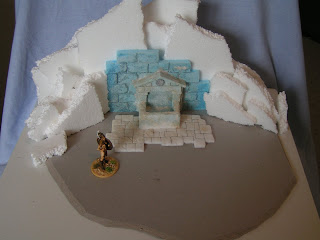 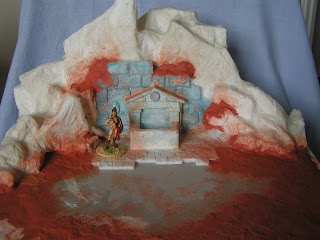 Photo Four - In this image you should be able to get a better idea of the size of this model. 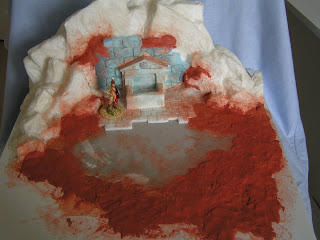 Photo Five - With the bulk of the groundwork now completed - the base is looking like a large piece of terrain or diorama. I have decided that I will use it as a 'back drop' for when I take photos of my finished Typhon project miniatures, It's too big to be used as a piece of stand-alone terrain, and too small to be used as a gaming board. However I am happy with it.
The groundwork and rock texturing has been built up with ready mixed filler, some white DAS, sand and sieved stones applied over uPVA glue. 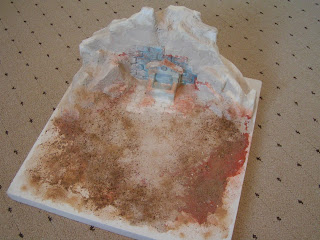 Followers will know that this started out as a simple (small) well and as you can see is now a large display piece. It was never planned to be like this - it just grew.
In the next instalment I will give details of the painting and finishing.
Tony
Posted by Tony at 00:40

Have you used just 'regular' kitchen towel? When you describe putting the paper towel on first have you put the PVA on the foam then laid the towel on top or soaked it in PVA first? I read an old article recently describing how Ian Weekly used paper towels soaked in PVA to model terrain, so will be very interested in how this turns out, great work so far (as usual).

My technique was to first paint un-diluted uPVA glue over the foam rocks and then lay strips of torn kitchen towel over the glue. I then coated the kitchen towel with more uPVA glue and when dry added a second and third layer over the top.

With the weather being so warm and dry the glue dried very quickly and I was able to add DAS modelling clay the very next day. This I dried by placing in a standard fan oven on very low light for about 15 minutes.

I am aware of the article by Ian Weekly, in fact I think I have it in one of my modelling books. I Personally find that layers are better than crumpled up towels.

In answer to your question - just ordinary kitchen roll or kitchen towel.

Thanks Tony. I'll give this a method a try soon. Lots of terrain making planned for the near future.

Thank you for sharing to us.there are many person searching about that now they will find enough resources by your post.I would like to join your blog anyway so please continue sharing with us.