Iberian Windmill - The first of a new Blog feature

Earlier this month we had visitors and I plucked from the attic some early terrain pieces to show them examples of the models I build. This particular Iberian or Portuguese Windmill was built some years ago and although it has featured as a backdrop to some earlier snaps, I thought it was worthwhile featuring it here in a new Blog section labelled Terrain Gallery.

As it was already down from storage I took the opportunity to re-flock the base as the original had become rather pale and threadbare. In addition I have picked-out a couple of the stones in the base with acrylic paint. 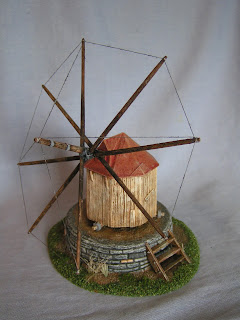 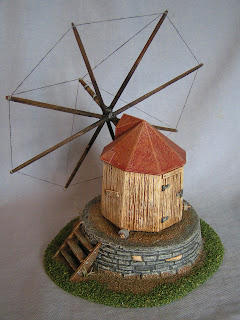 The model is of an Iberian windmill that I found in a tourism magazine or brochure. The base is constructed from a piece of MDF, cut into a rough oval with the edges chamfered. The stone base is modelled from DAS modelling clay over a couple of stacked discs of plain corrugated cardboard and the rough stairway is built from scraps of thin wood.

The body of the windmill was constructed from card with a thin veneer of Balsawood onto which I have scribed planking and nail holes. The roof was built from individual pieces of card over a simple former.

The sails (or should that be masts) are built from barbecue skewers sanded and cut to shape. The rope is just cotton held in place with superglue.

All the painting was carried-out with my usual stock of modelling paints.

The images below show the model in greater detail. Unfortunately I have no work-in-progress shots. 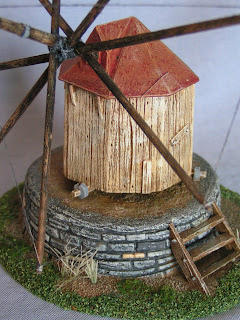 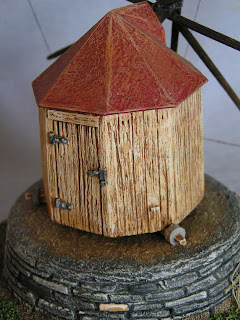 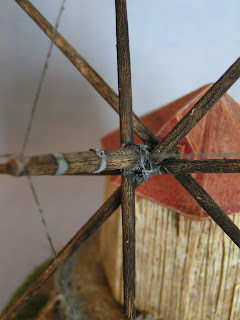 Finally I have scoured the Internet for an image of the original to illustrate this post. The best I could find was this painting which I have downloaded from Google. It was difficult to find an image free of copyright but I think this is one, should there be any objections I will of course remove it. 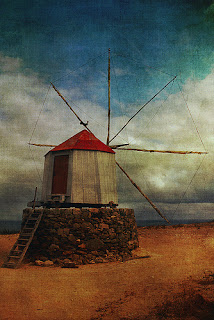 This remains one of my favourite pieces of wargame terrain and although not based on any feature that might have been involved in a historical engagement I like it for its novelty value and uniqueness.

It is my intention to add other pieces of terrain to this section, so keep an eye out for more.

Fine piece of modeling. It's always a pleasure to view your work.

Beautiful work and very evocative of the type of windmills you find in Portugal and Spain.

Excellent piece of work. I look forward to looking at others in this new blog feature.
Stu.

Very nice piece, and quite intriguing - I have never seen such a windmill before, with an apparent absence of something to actually catch the wind!

So did they take off the "sails" at different seasons - interesting the bare wires, excellent work.