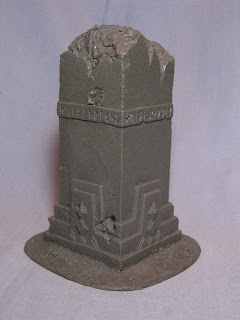 The original masters were produced by me earlier in the year. I used Plaster of Paris to cast up four perfect pillars and then proceeded to 'ruin' them as dictated by Steve Blease (one of the partners of Hysterical Games who commissioned these Skogtroll terrain pieces).

Image Two (below) - Is a more ruined and collapsed version (my favourite of the four and was built from a damaged Plaster of Paris master). The model is 90mm tall on a 130mm x 150mm base.

I have designed the first two models to be used as generic terrain pieces for many different gaming systems/genres. Hopefully I will have these painted and ready for play very soon. 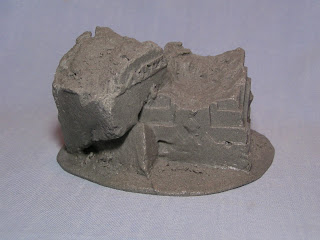 Image Three - Is another ruined pillar with a WW2 era concrete bunker to the side. As you can see this one has suffered some damage to the roof of the bunker during mould making (a case of using too much pressure when applying the silicone rubber?) I will be working on this pre-cast to repair the damage and hopefully the repaired and finalised model will be ready for sale very soon. 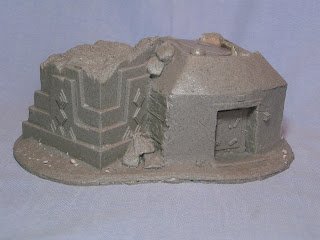 The final model and not shown here is another ruined pillar with a wooden shack to the side. As stated, I am hopeful that these will be available for sale very soon.

For details of the Panzerfauste terrain range - please see this link.

UPDATE;
Troglodytes not Skogtroll. Thanks Rob.
Posted by Tony at 08:56

These are fabulous and I'm gutted what happened to the bunker! Can't wait to see how it looks once it's all fixed up again.

I've cast up the hovel and that's looking great too. I've also just poured silicone onto the final watchtower piece.

It's worth nothing, these are for the Troglodytes, rather than the Skogtroll! :)