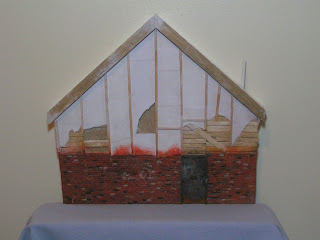 Unlike the brick built base of the Salt Pan (see earlier posts) the brick wall on this part of the layout was impressed into pizza foam (the foam that you find as backing to frozen pizzas). The painting was done over a thin layer of cream and grey acrylic (the mortar) and then the orange/red brick colour was drybrushed over the bricks. The finished effect took many layers of red, brown and orange drybrushing but I think the effect was worth while. Once fully dry, individual bricks were picked out with a fine pointed brush in darker black colours and lighter white.

The whole wall has been washed in different coloured washes and I have used watercolour pencils to highlight some bricks as well as produce the simple graffiti.

The metal door was painted in greys with rust effects on the lower edge and some more watercolour pencil detailing on the door furniture. The door design and colour was copied from a similar door I had seen on the Internet. 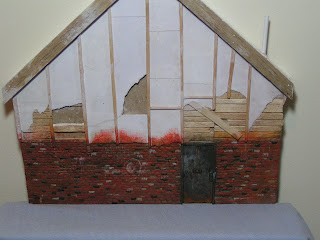 The final image shows the low-relief building against the office wall to show the effect I was looking for.