The Battle of Waterloo - a talk by Tim Burgin 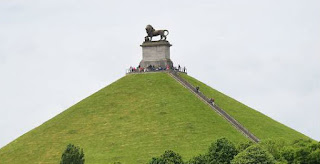 Last night I attended a lecture hosted by the Chaddesley Corbett History Society entitled The Battle of Waterloo presented by Tim Burgin a member of the Waterloo Association. The talk which lasted about 2 hours followed a timeline which started on late Saturday 17th June, through the events of the 18th of June and touched on some of the repercussions of this historical battle.

Tim used a mixture of reproduction firearms, models and actual shot from the battle interspersed with framed and limited edition prints and maps to illustrate the key actions of the day hour-by-hour. But it was the informal and humorous manner in which Tim interacted with the audience that was the highlight for me and the two hour talk fizzed along at breakneck pace.

Later there was a question and answer session which highlighted Tim's expert knowledge of his subject. I would thoroughly recommend searching out similar talks and making the time to attend one of these events.

Arriving back home I was impressed by how much new knowledge Tim had passed on to me in a short and joke filled presentation - very well done and thank you.

I have added links to the Waterloo Association which you can find here and details of the talk as presented by the Chaddesley Corbett History Society.

Tim Burgin is a member of the Waterloo Association. Tim uses prints, books, replica weapons and models as this talk follows the culmination of the "100 Days" following Napoleon's escape from Elba and one of the most famous battles in history, the Battle of Waterloo. The talk is entertaining, Tim looks at the event from the point of view of the people who took part and the things they saw and did. Please note that this tale is fairly bloodthirsty, it is about a battle! It was fought on Sunday, 18 June 1815, in contrast to our recent commemoration of WW1 that took 4 years to fight out. All over the country this battle was celebrated with Waterloo Bridges, streets, towers and of course the world famous station in London, it is one of the UK’s historical events that everyone knows about, but no one can tell you about. At the time it must have been on everyone’s lips. A great victory. Victor Hugo used situations from Waterloo in Les Misérables. While discovering a famous story, we can fill in the gaps in our knowledge.
Posted by Tony at 00:49

I came across this Daily Mail report and thought it was worth adding.