I have just received Grapeshotte, the Flintloque expansion book from Alternative Armies. This now means that I have all four books for Flintloque 3rd Edition; War in Catalucia, Death in the Snow, Bier & Bones and Grapeshotte. For further details go to this site.

The Grapeshotte Expansion book is more than a list of artillery pieces and their effects, it gives additional racial characteristics and background as well as nine pages of appendices; The Stirling Appendices giving details of The Londinum Coach, The use of Vehicles, Exploring Officers and Faith in Flintloque. As such it is a real expansion and required reading for all Flintloque/Slaughterloo fans.

The book was sent to me by Gavin at Alternative Armies. I was pleased to receive it with some of the new (brand new) Ferach Females which I intend painting up over the next couple of weeks.

Spread throughout the beautifully illustrated 92 pages were a number of references to The Moldsk Guard a regiment that I sculpted and which is now out-of-stock having been limited to just 100 boxed sets. 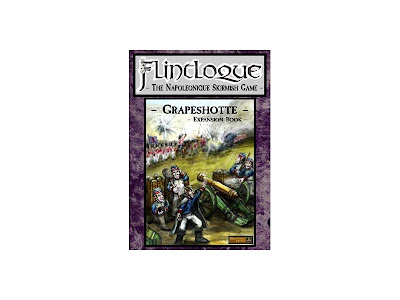 The new book follows a tried and tested format starting with an introduction, gives general rules on Artillery, moves on through The Queen of Battle, then lists the many types of weapons available to the Flintloque player.This section is sub-divided into Ferach Empire and its Allies, The Grand Alliance, The Undead and finally The Otharman Empire. The above mentioned Sterling Appendices comes next and finally some interesting Designers Notes. There are also some pull-out sections which give shotte and effect templates. 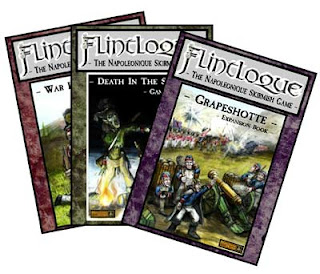 My own Flintloque miniature collection covers all three of the main theatres of war in Valon, Catalucia, The Witchlans and (my personal favourite) The Dwarf and Ostrian Empires. Therefore I had thought I would already have all of the reference material needed, however this expansion book adds to both the background mythology and gives a huge range of new weaponry.

Gavin has done a great job in compiling this book and Edward Jackson has once again excelled with the great illustrations. Well done to all.

Please note that Grapeshotte is an expansion book and as such you will need one of the Flintloque Game Books (for example War in Catalucia) to make use of this expansion and play a game of Flintloque.

Thanks for your great little review of the book. I had a good time writing it and it is a super resource for all Flintloque players.