Yesterday, I spent some time taking photographs of finished terrain pieces as the light was so good. While I was up the attic fetching down some trees (see them in the background) I thought I would take some images of this monster. The Green Dragon Inn is over twenty-five years old and is one of the first large pieces of terrain I ever built (at the same time as the Elephants Foot - or  Wizards Tower - which featured in an earlier post).

Most of this earlier terrain, has been sold, given away or just dumped.

The model was inspired by an illustration by Gary Chalk in a very early White Dwarf and is built from DAS modelling clay over a corrugated cardboard core.

The model has seen some use in its lifetime being a centre piece for many Warhammer Fantasy games before being consigned to the dark attic of ignorance. 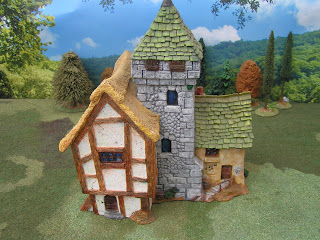 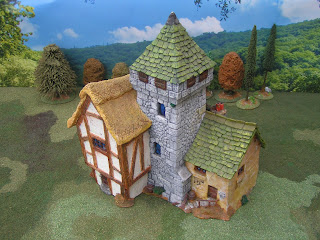 I still enjoy looking through Gary Chalk's illustrations and when I do I usually want to build another Lone Wolf or Redwall inspired piece of terrain. In recent times he has drawn a number of new images for Rackhams, these are well worth searching out.

I have thought about repairing this model, re-building it and adding another layer of paint, but strangely I also feel that it is a testimony to some very early modelling and painting skills which I prefer to keep as a record of how I have developed.

The Green Dragon has appeared in Celtos games, some English Civil War games and many Flintloque encounters, but it is Warhammer Fantasy Battles (First and Second edition) that give me the fondest memories.

The tower stands well over 360mm tall and with very few exception is all scratch-built from DAS. I thought you might like to see it, It deserves to be featured somewhere.

Finally; the photographs feature my own gaming board - Railway Modellers green flock (or dyed sawdust) over polystyrene which although cheap to construct and fragile has lasted me many many years. The background is a tourism poster picked up at a clearance sale, while the model trees are either scratch-built or modified shop-bought.

A lovely looking piece and I wouldn´t re-paint it either.
Cheers
paul

Great looking piece, definately of the time.
I would personally repaint it, but I have none of the memories you do of it!

You have obviously always been a fantastically talented modeller and it makes me very jealous!

Thniking about it, I may build another model based on the Gary Chalk image and make it slightly smaller.

Superb model - I really enjoy looking at your stuff!
I like the 'studio' for the photo - how's that set up?
Mike