It was some time ago that I first saw this book for sale at the Ian Allen bookstore in Birmingham. At £20.00 plus I thought that it was a little too expensive for me and so I left it on the shelf. However as time went on and I was talking to my Wife and Mother about the books that I had seen Sue said "why don't I buy it as a wedding anniversary present and use up some of your Paypal reserve and purchase it direct from Auriga Publishing International, Italy".

This I did and the book arrived very well packaged Static Model Manual Volume 4 Building - 101 tips.

Frankly; the book does exactly what it says on the cover. 101 modelling tips from how to remove plastic components from the moulding sprue to how to make moulds and cast in resin. On its 113 full colour pages it really does cover every model making hint and tip you could possibly want and although (obviously) targeted at the Military Modeller (1/35th scale Armour and 1/72nd and 1/48th Aircraft) there is lots of useful advice for modellers of any scale and genre.

This is the fourth book in the series. The others are; Volume One - Military Dioramas, Volume Two - Modern Fighters, Volume Three - Painting and Weathering and Volume Four - Building. I choice the Building volume as the only other one of interest to me was Military Dioramas and the subject matter - 1/35th scale armour was too specialised for me. 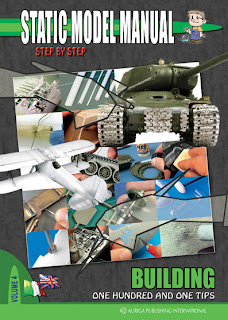 As a modelling manual it is very similar to others that have been produced, particularly as specialised books from Fine Scale Modeler, Kalmbach Publishing and given that a number of hints and tips are repeated you could be excused for thinking that it is not really needed. In truth this is the case, but as a great read and a beautifully put together book it is a great addition to any modellers bookshelf.

In reviewing the book I have just two issues, Firstly a minor one and one that does not in my opinion detract from the book. All the text is in Italian/English. This is not such a great issue, but worth pointing out as some may not like this. The translations are very good and unlike some other dual language modelling books I had no trouble following the text or feeling that the English had been miss translated.

The second issue was the length of time that delivery took. Almost a whole month which in these times of instant turnaround of e-bay orders was a little annoying. I had previously read about horror stories concerning the Italian postal service but was not prepared for this delay.

Overall I would give this manual a firm thumbs up, but find it difficult to award it a 10 out of 10. I am therefore going to declare a 8.5 or 9 out of 10, due to the issues stated above.

Finally, although targeted at the Military modeller, the tips are just as relevant to model railway modellers and model boat builders and should have something for anyone who builds plastic kits - what ever the scale or subject matter.

The next time I am in Ian Allen's bookstore, Birmingham I will check out the other three volumes and see if they are worth the cover price.