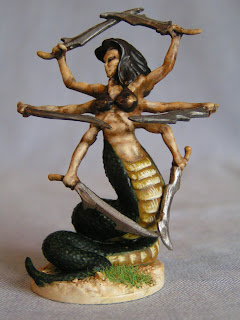 Over the last two, to three months I have found myself wanting to paint some of my un-loved figures, my Lead Mountain! The Building Wargame Terrain book has taken up much more of my time than I had expected, and Book Two is continuing to be a drain on my free time or leisure time. However in between modelling structures for the book I have also allowed myself the decadent pleasure of 'just painting a miniature'. Most (if not all) have been 40mm figures, either 40mm Ancient Greek for my long shelved 40mm Typhon project or my 40mm Flash Gordon figure collection.

Instead of trying to update my Blog with an On-Line Build for September, I intend featuring one model a week, one model that I have based and painted over the Summer. I will start with Kali. Kali is a plastic figure, part of the Monster in my Pocket collection that I picked up some years ago from Poundland (for one pound). I choose Kali after reading a thread on the Lead Adventure Forum, where a member was asking for suitable Kali figures for his own Ancient Greek adventure.

The figure is mounted on to a pre-decimal 1d coin with the base built up with Milliput. There are some areas where I have had to fill gaps (most notably, around the back of the shoulders), but the figure is pretty much stock.

Prior to painting, I have undercoated the whole figure with some slightly diluted uPVA glue before painting with acrylic paints. The colour scheme is as the original miniature with some added 'Kevin Dallimore style' highlighting on the snakes body. I have Matt Varnished the miniature with Galleria Matt Varnish before adding some static grass.

Photo Two - Shows the Kali figure alongside my 40mm Spartan Miniatures Greek Hero. Kali stands 65mm from base to top of swords. 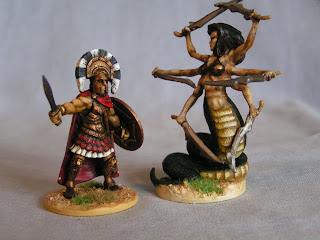 Photo Three - Kali from the rear. It is obvious where I have had to use Milliput to fill-in the joints between the central pair of arms and the body. This Kali model is ideal for my 40mm collection, but possibly too tall for a 28mm/30mm collection. 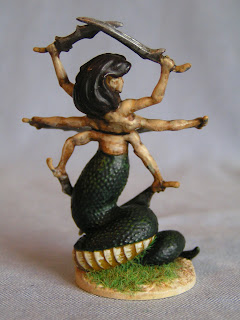 I have made a mistake in identifying this miniature. I now believe that it is a D&D painted plastic collectable figure called Marilith (025) from Savage Encounters.