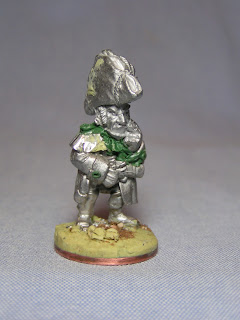 It has been some time since I featured an On-Line Build thread- so here is my latest customised Flintloque figure. Olde Nosey.

The metal miniature is a mix of two figures; Olde Nosey from the Flintloque boxed set Sharkes Victory (5004) and the Officer figure from The Orc Guard Infantry set (54510).

The Guard officer was cut with a jewellers saw from his right shoulder to the left waist while Olde Nosey had the same surgery. The two pieces were pinned and joined before the gaps were filled and detailed with green stuff. I have added some additional buttons and cuffs, but the conversion was quite simple to do and gives a unique looking character model. 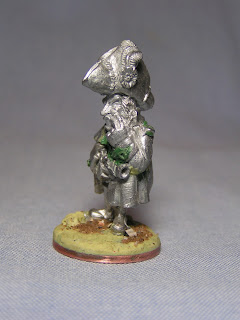 As usual I have mounted the figure onto a 2p coin and built up the groundwork with Milliput before adding some sieved sand over PVA glue. I prefer basing my miniatures in this way for three reasons, Firstly; it gives the figure some weight, some added bulk.
Secondly; I find it much easier to hold when based.
Thirdly; I don't like to base my mini's after they are painted - I think it is better to have them based - the groundwork fully textured and detailed before I start painting.

Question - "How do you reduce your lead mountain?"

Answer - "You paint them one at a time."