The Gingerbread House from 2012 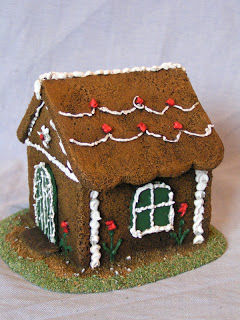 The Gingerbread House
A most unusual Modelling Masterclass by Tony Harwood

This article was originally published on Barking Irons Online as part of a series of Flintloque inspired terrain pieces back in 2012. With the demise of BIO, this was another one of the 'lost' articles/tutorials and I have reproduced it here in full. The overwhelming response following a demonstration game at Salute 2012 in which the finished model had pride of place in the aptly titled Sharkes Gingerbread scenario led to this article being written in the first place.

This has got to be the strangest, the silliest terrain building article I have ever undertaken.  Possibly the quirkiest ever written, by anyone! And even those who are familiar with the nuances and comic humour of Flintloque may require a little explanation.

Every year Craig Andrews publishes a series of Flintloque themed articles as an Advent Calendar on the Web pages Orcs in the Webbe. In previous years I have written articles, short stories and gaming scenarios all of which can be found here.

In 2011 on Tuesday the twentieth of December a story and gaming scenario called “And he has Raisins for Eyes!” Written by Matthew Hartley had a deep effect on me. Rather than try to explain the story here, I suggest that anyone who has not read this tale stop. Pick up a Digestive Biscuit and a warm Cup of Tea (Ginger Biscuits and Hot Cocoa are also allowed for – Uncle Rogipoos) and proceed to read the back story and gaming scenario which can be found here.

My immediate reaction after reading the short story was to look around for a suitable Gingerbread man model that I could use to play the gaming scenario (more on this later). My second idea was to look at producing a themed piece of terrain – hence The Gingerbread House.  Hours spent searching the internet for suitable images were fruitless, not even a crumb of inspiration, that I thought could use to build my model and it was left to my imagination to come up with a suitable plan.  However in the January Sales, while acting as chauffeur and bag-carrier for my Wife, my Daughter, my Mother and my Mother-in-Law I saw the perfect Gingerbread House for sale in TK Max, the discount store.  I took a number of images on my mobile phone, very conscious of some strange looks from fellow shoppers – “What on earth was a grown-man doing taking photos of Gingerbread Houses during the mad rush of the January sales?” 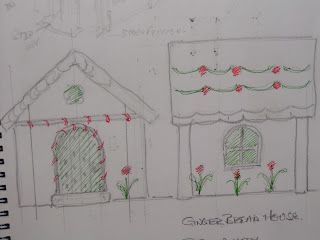 You will be glad to hear that I wasn’t carted away in a straight-jacket “Don’t worry – he’s a wargamer!” But allowed to proceed.  Back home I sketched up a small plan of the house and started to mull-over how I was going to model it.

Now for the cookery lesson; gingerbread houses are usually constructed from slabs of cooked gingerbread sponge and ‘glued’ together with icing.  The buildings details are iced or ‘piped’ on to the cake walls in a very naive style and should include; A - a Door, B – Windows and C – (a prerequisite for Gingerbread Houses) Snow on the roof!

I wanted to model my Dwarf Gingerbread House in the traditional style. 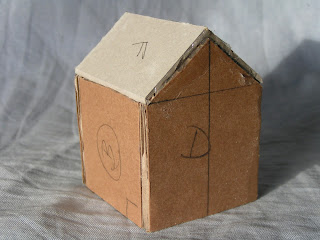 The core was built undersized from packing-case cardboard which was glued with a hot-glue gun. 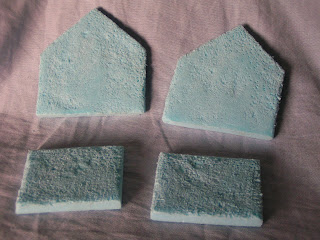 I then built two sides, a front and a back wall from 10mm thick blue foam. The foam was textured by pressing a rough garden stones into the surface, rubbing with sandpaper and then brushing or scrubbing the surface with a small wire brush. I even ‘pin-pricked’ the surface with the point from a drawing compass to add texture. 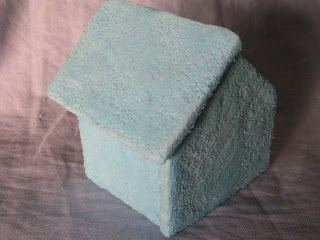 The two roof sections were cut over-sized, detailed with ‘scalloped’ eaves (as featured on the original Gingerbread House from TK Maxx) and textured in a similar manner to the walls. 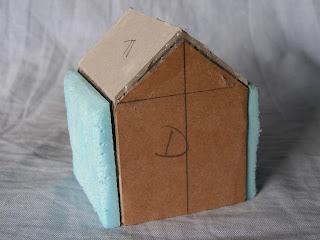 The construction preceded by gluing the pieces together with my hot-glue gun. First the two side walls were attached to the cardboard core. 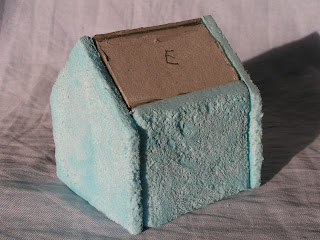 Then the front and back panels were glued in place. 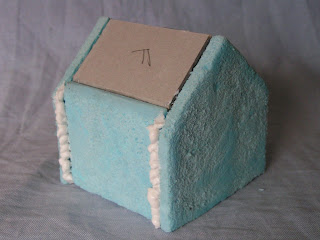 I then used a tube of NO MORE NAILS to replicate the icing. Piping it as if it was royal icing from a spare caulk applicator (think long piping nozzle) that I had in the shed. 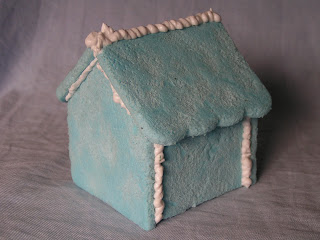 The two roof sections were hot-glued on to the cardboard roof and once again gaps were filled with NO MORE NAILS.

At this stage I had no idea how the glue/icing would set and so left it for some hours for it to go off.  On returning to the model I found that the NO MORE NAILS had developed a skin and had set enough for me to proceed. 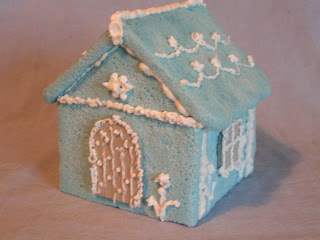 The detailed icing was done by transferring the NO MORE NAILS to a plastic bag and cutting a small hole in one corner.  I then iced the decoration as if I was decorating a cake! For full instructions – read a book of cake decorating.

The windows and door are small pieces of cardboard, cut to shape, glued to the surface with the hot-glue gun and ‘iced’ with NO MORE NAILS from the same plastic bag piping bag. 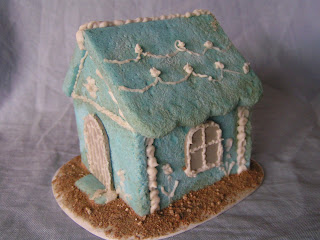 The next day I mounted the model on to a piece of 3mm thick plastic card and built up the groundwork with DAS modelling clay. Further ground texture was added by gluing sieved sand and small stones to the DAS with watered-down PVA glue. 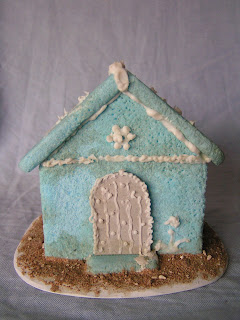 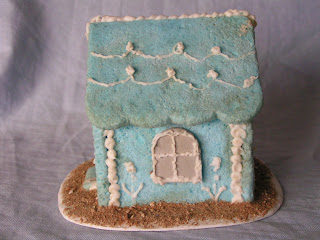 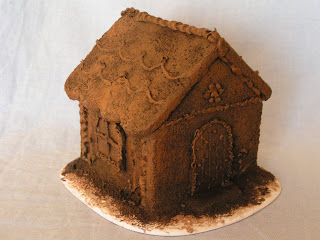 I started by undercoating the whole model with some watered-down craft paint. I used black and dark brown paint and added a little washing up liquid to the water to reduce the surface tension. Even so it took three coats to get an even base coat. 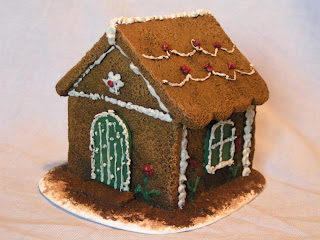 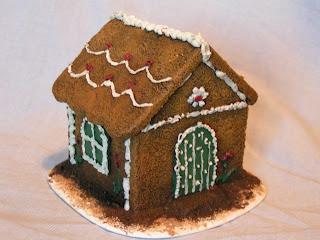 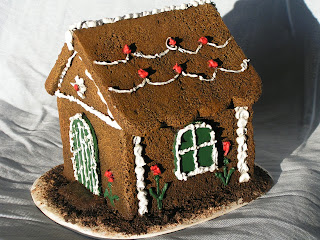 The first real colour to be applied was some Charred Brown from  which I applied with a large hogs-hair brush in a scrubbing action. I was not too worried with the coverage of this first application of colour as I knew that subsequent coats would hide any irregularities. Once dry, I washed the whole model with some GW Badab Black wash in an attempt to hide any blue foam showing through.

The main colour coats were Charred Brown, Bestial Brown and some Snakebite Leather which I built up in layers concentrating on the roof and tops of the walls, leaving the base or lower walls dark brown. Once again I used a cheap hogs-hair brush, starting with a scrubbing action and finishing off with a light drybrush.

Prior to starting the detailed painting I gave the whole building a final light drybrush of lightened Snakebite Leather which was mixed with a touch of Skull White.

The next image shows the main painting finished. I have highlighted the white areas with pure Skull White from GW and the red areas with pure Bloody Red from . By only highlighting once the icing appears more intense and even artificial however in my quest to paint the NO MORE NAILS as if it was piped icing, I think I have succeeded. 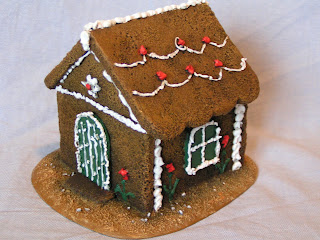 The groundwork was painted in my usual style – Snakebite Leather, lightened with Skull White and with some of the larger stones picked out with a Chaos Black and Skull White mix. At the same time I touched-up some of the pure white areas with a standard GW brush and Skull White. 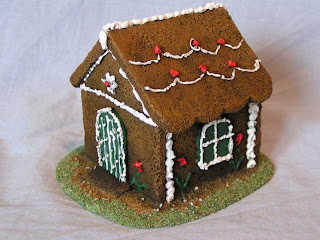 I showed the painted Gingerbread House to my Wife who commented that apart from being a little too dark - it looked good enough to eat! While anyone who has used GW Washes will know it smells awful. 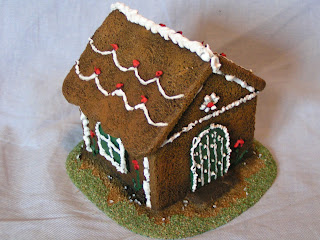 Once the base was fully dry, I flocked the edges with some dyed sawdust flock which was applied over dilute PVA glue. 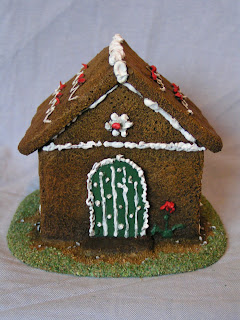 The Gingerbread House finished and all ready for Matthew Hartley to write a themed scenario. I am pleased with the end result and although of limited use as a Flintloque terrain piece, I feel it captures the philosophy and ethos behind Flintloque better than any of my earlier Masterclasses. I hope that you have enjoyed reading this article as much as I have enjoyed building the model. And thanks to both Gavin and Craig for allowing me this little bit of indulgence.

All we need now is for Alternative Armies to release a Very Limited Edition set of some Dwarf Patisserie Chefs and a Giant Gingerbread Men……………. 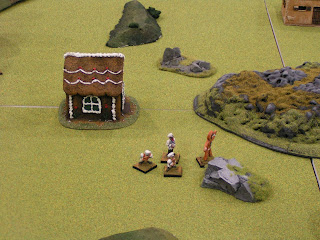 Here is another link from Alternative Armies, that may be worth checking out;