In part three I have listed the epoxy putties that I use and why. To begin with, my favourite two putties are Milliput (yellow-grey) and Green Stuff Kneadatite. I prefer the yellow-grey Milliput as it is cheaper and slightly easier to get hold of. The Green Stuff can be bought from Games Workshop (or on E-bay, but be careful, I have had at least one batch from E-bay that was very poor).

Milliput - can be used for filling gaps, adding detail, producing very strong bases and adding texture. As stated I prefer the yellow-grey for cost, but also have a box of white for special occasions. Milliput was the first epoxy putty that I used and I feel this is why I am so comfortable with it. It is also very widely available.

Over the last year or so I have begun to mix Milliput with Green Stuff (the ratio varies depending on the model or the use, but a 3 part Milluput to 1 part Green Stuff, produces a mix that has some plasticity when soft for sculpting detail as well as setting rock hard. I would suggest that other modellers experiment with the ratios for their own needs, I do not think there is a right or a wrong mix).

Milliput wins hands-down when it comes to 'sandability' and being able to carve detail. Green Stuff tends to 'pull' and maintains some flexibility even when fully set.

Green Stuff or Kneadatite - the sculpting medium of most of the 'great miniature sculptors' and not by chance, the product is just fantastic to work with. I have two little hang-ups with the product that I think maybe unique to me! I always cut the centre section out (where the yellow meets the blue ribbon). I am not sure if this is really needed, but as stated, it is something that I always do. Secondly I try to get a 50/50 mix of the yellow and blue, not always easy as the ribbon proportions tend to be more yellow and less blue. 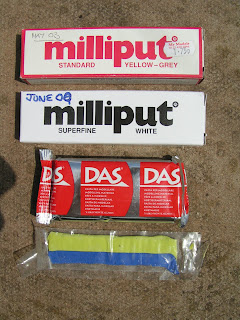 You will see that I have also included DAS modelling clay. I have been working with DAS for many, many years and feel it is the best terrain modelling material readily available and again very widely available. I tend to mix some PVA glue with the clay and usually model on to PVA glue to make sure it remains in place. I use DAS in two very different ways - firstly over PVA and to build up terrain, for example on to MDF bases and using broken pieces of cork to add texture. Then secondly (once again over PVA glue) to add a skin which when fully dry can be carved, ideal for adding stonework to foamboard structures. I always seal DAS with a thin wash of PVA glue and water.

This second photo shows some of the other putties and fillers I use. From left to right they are; Humbrol Filler, OK as a filler provided that you do not have it too thick. Power Grip or any tube filler (Polyfiller for example), mainly used diluted with water and PVA glue to paint on texture. White Putty (or in some countries Green Putty), a perfect fine filler for modelling with plastic kits. The last is quick setting epoxy putty (there are very many different makes) - I use it when I need a quick setting putty rather than have to wait for it to harden or if it would be difficult to heat up and cure in the oven. 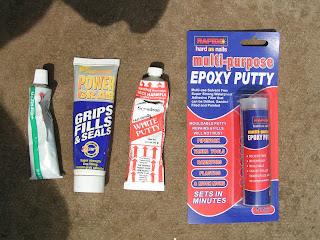 I also have a new pack of ProCreate Sculpting and Modelling Putty, which I recently picked up from E-bay. It is too new for me to comment on, but I look forward to practicing with it.
Tony
Posted by Tony at 05:01

Hi Tony, a great blog always a mine of information, thanks for the putty info very useful.

Keep up the good work, and good luck with the job hunting.

love the blog, esp. the terrain and Sauerkraut War stuff.

Keep up the good work,

I'm hoping that The Dwarf Sauerkraut Wars project will be taken up by other Flintloque gamers, there is the promise of a comic story coming soon, so keep checking-in.