The two miniatures featured below are just two of about a dozen figures I picked up on e-bay some time ago. They are from the now discontinued range of 40mm American Civil War castings from Wargames Foundry and sculpted by the Perry brothers.
The figures have been mounted on to 25mm metal washers and painted over a dark brown/chocolate base. 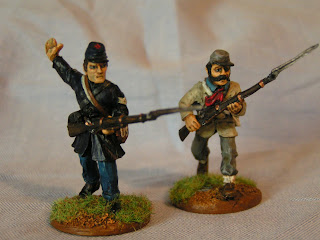 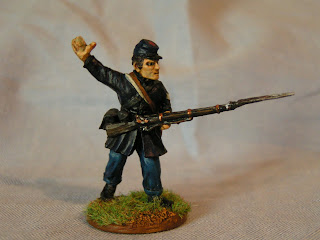 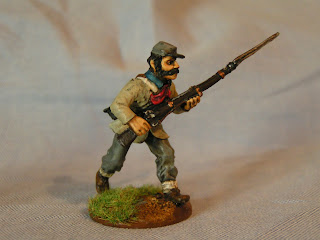 The figures were first stripped of paint by soaking them in Dettol and then washing in warm water and washing-up liquid. I mounted them on to the metal washers some time ago, but have been forced to painting them as the 40mm terrain I have been building needed some miniatures to display alongside for COLOURS, the Newbury show this weekend.
My intention is to paint these and some Front Rank 40mm AWI figures for displaying with the painted terrain examples seen in earlier posts.
The only slight criticism that I have with these figures, is that the guns are so fragile. Correctly sculpted and moulded, but so easily damaged, especially for wargame figures, that and they are so rare, I regularly check e-bay for more figures, but they are very rare!
Tony
Posted by Tony at 11:30