Its been a while since my last Flash Gordon post! I've been busy on other projects. However the lack of painted 40mm figures for the Flash collection has led to this miniature being finished (it was started a very long time ago!)
A 40mm figure produced by Citadel, from the small and now almost forgotten 2000AD/Judge Dread range with a new head from a Foundry Sky Elf, a remodelled gun and some green stuff. 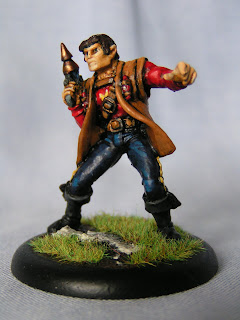 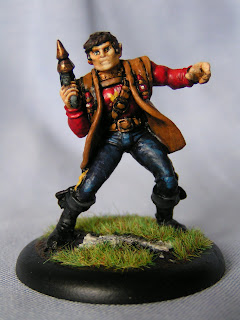 The miniature is mounted on to a 40mm round base and stands 40mm tall. I tried for a paler skin tone with this figure and used Vallejo pale flesh rather than my usual Games Workshop Snakebite Leather for the base. The Starhawk name is from the Stablazer and Crunch series of comics produced by D. C. Thompson & Co. Ltd. Not quite in the Flash mould, but a great character.
I am particularly pleased of the dynamic pose, something that is very hard to model in such a small scale. The figure was picked up on e-bay some time ago.
Tony
Posted by Tony at 09:38