Over the last twelve months I have been asked by a number of people "Why Flintloque?"

It is strange but until asked and having to think of an answer, I had never given it much thought. Like most gamers the inspiration for choosing one period, one scale and even one army when it comes to wargaming is usually a very personal decision and as such will obviously be influenced by many things.

I've already written about my model making heritage - my Father building balsa and tissue aeroplanes then ships in bottles - something that I have always admired. Then my Grandfather and his huge model railway layout running round and round the spare bedroom. I have fond memories of seeing The Lord of the Isles chuffing around the rather bare terrain! Then my Uncle who built beautiful 1/72nd scale planes and in particular American jets. 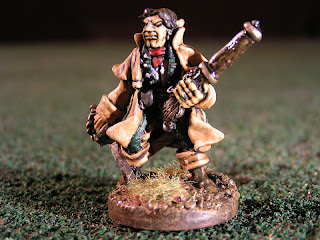 All this is a little round-about. But then in the early 70's I was introduced to wargaming. As a spotty schoolboy I was allowed to join a wargame club at Swansea University and gamed with hundreds of early Airfix American Civil War figures mounted on to beer mats which were moved over green dyed sheets with chalk roads and rivers.

During this formative period I first played Dungeons and Dragons. My introduction to Role Playing.  In addition as a member of the club I took part in a huge re-fight of Waterloo where I took personal command of a battalion of British Readcoats.  This game covered the whole floor of a Senior Common Room floor and took three days to complete! 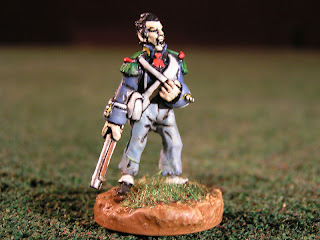 Once again a little around the houses. Fast forward - and married, moved away from Swansea and now the proud Father of two I still painted and collected toy soldiers, mainly GW Dwarves which are still one of my all-time favourites.

It was about 10 or 12 years ago that I first became aware of Flintloque - the original Flintloque boxed set, but at £20.00 I preferred to test the water with a couple of blisters of Orcs which were painted with bright Goblin-green skin!

I was hooked and very soon I had the original boxed set with all figures based and painted - based on 2p coins and not the square metal bases - something I have stuck to. I also picked up quite a few discounted sets from the now defunct model store Beatties. Beatties in Bristol. Do you remember them?

My very understanding Wife couldn't understand what I saw in these Ugly Miniatures, her words and not mine. And something that she still can't understand.

My collection grew with regular purchases and even the odd themed terrain piece - although in the main I made do with my existing Warhammer terrain. At about the same time I became aware of the Society of Fantasy and Science Fiction Wargamers and their in-house magazine Ragnarok as well as the original Flintloque Yahoo site, where as Dampfpanzerwagon I was introduced to like-minded gamers. 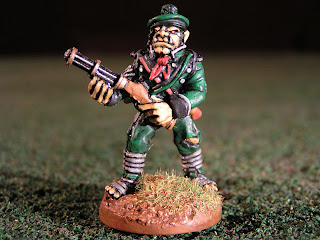 Dampfpanzerwagon was the name given to some Flintloque steam tanks that I had built and which feature in Ragnarok issue 41. A very rare publication!  Some of the comments and images have appeared on this Blog and if all goes to plan - should be re-published soon. 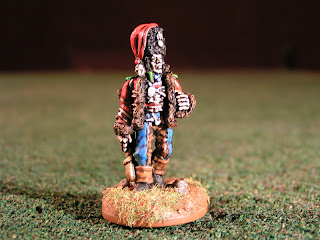 I think the next major leap forward was the conception of my Dwarf or Great Sauerkraut War background where I envisaged a Dwarf vs. Dwarf Civil war using Flintloque rules and miniatures but a distinctly new background. The 2nd Sauerkraut Wars took on a life of its own with many regiments of Dwarves being painted up and based in readiness to take to the battlefield. The project remains active and one day I hope to not only game the background but campaign it as well. 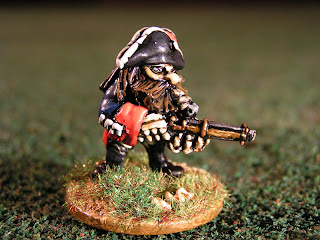 So here endeth the history lesson.  But still "Why Flintloque?"

I think I enjoy the quirkyness of both the figures and the rules.  The back stories appeal to my sense of humour and the fan-fiction is even better - just take a look at any of Rogipoo's posts on the new Flintloque Yahoo site - The Notables to see what I mean.

I also believe that Flintloque has a cross-genre appeal. Napoleonic/Fantasy - even Undead/Fantasy that just presses all the right buttons for me.  I am sure that 'serious' Napoleonic modellers must look-down-their-noses at some of the Flintloque combinations but for me this is what I like about the game.

In addition the chunky or even ham-fisted miniatures have an appeal that I enjoy collecting and painting. In fact the very chunkiness that some criticise is one of the very reasons I enjoy collecting them. The over-the-top sculpting compliments my similarly over-the-top painting style and as stated so many time - this is a personal hobby and I enjoy myself. 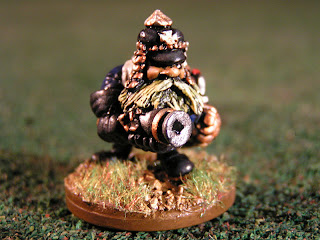 Finally - the friends - some whom I meet in person others who I have only ever spoken to via the Web, Blogs and Yahoo sites are such a strong and supportive bunch of characters, many of which I would never have met if I had not taken that plunge back over a decade ago and bought that single blister of Orcs in Redcoats.

Great post Tony, especially the part on how our we come to choose our particular hobby poison. My own fondness for Flintloque stems from many of the same notions, the game's sense of humour and the rather unique sculpting. I simply love the undead in Flintloque, and I have rather a large contingent of them. It's still on my to-do list to paint them, but they're there, waiting their turn. Zoltan's 666th foot are probably first in line. Undead dogs, genius.

"Beatties in Bristol. Do you remember them?" - still using the last bottle of liquid poly I bought from them. At long last Modelzone have now opened a shop in Bristol...

I have to agree, I think as a young sprog, finding Flintloque interesting was just because it was different. My first unit box was the Orc Camp Followers, at that time, I really liked GW's Orcs (mostly Kev Adams ones at the time) and Mike's sculpts reminded me of those. The notion of having 'non-combatant' orcs seemed to really interest me.

Now, I love painting them, they paint themselves and they are not as demanding as other figures on the current market. Throw out 3 popular names and they all very similar (and hard to paint)!

So Up the Flintloque and long may it live!!!

I first came across Flintloque in the mid 90s at Dungeons and Starships in Digbeth Birmingham. Then Beatties in the Bull Ring started stocking huge numbers of packs, which they almost immediately lost interest in and sold off cheap – so I bulk purchased. Id pretty much forgotten about / lost interest in it until I came across the excellent blog and started painting a few bits and bobs, and then filling the gaps in the collection through ebay.

I also used to visit Dungeons and Starships. I think there was also one in Walsall?

Nice to hear that you have come back to the great game.

I am on the return to gaming route and am at a bit of a dither over which games to play, currently getting a few SAGA armies sorted but that isn't going to take long.

Is Flintloque well played/supported as I have to say I do like the imagery and the ideas. Conversely, I don't like the rigidity that some Historical games try to enforce in the cause of 'realism'. By the way I am in Coventry....

Dunno, there was a D & S on Summer Row in Birmingham behind the library, but I pretty sure that’s what moved to Digbeth.

I agree with Rob that Flintloque figs pretty much paint themselves.