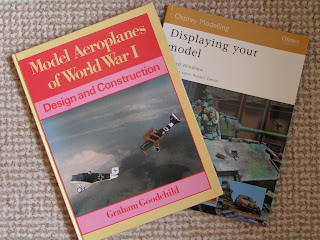 This month, I picked up these two books, Model Airplanes of WW1 was bought from a charity shop in Stratford-on-Avon for just £1.25 and The Display Your Model guide was purchased via e-bay for less than £3.00.

Model Airplanes of World War 1 by Graham Goodchild is my type of book, full of illustrations and step-by-step tutorials with loads of useful tips for producing scratch-built model aircraft, at just £1.25, a real bargain and a book that I expect to be sitting on my workbench for some time. I reminds me of the earlier Harry Woodman book - Scale Model Aircraft in Plastic Card, another one of my favourite 'How-To' books.

The Osprey Modelling Guide - Displaying Your Model by Richard Windrow was spotted on the Internet earlier this month, at just £2.78 I thought it might be of interest, particularly when producing terrain models. However, I found it a little too simplistic or all-encompassing and with little that was new to me. As a bargain book, I believe that I have had my moneys worth, but it never quite fulfilled my expectations and this was a disappointment as I have other Osprey Modelling Guides and books written by Richard Windrow that I regularly read and refer to.

A nice book, but overall a little disappointing.