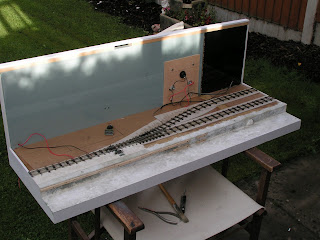 At long last, the track has been laid and wired.

I have used PECO 'Crazy Track' that is intended for O-16.5, one length was bought from Tennents Trains in Halesowen, the other was spare from an earlier layout. The single Y turnout came from the same earlier layout.

I have removed a number of sleepers and re-spaced them to be about 50% wider than originally modelled. The turnout was left as standard, although one of the metal connectors proved to be a right pain to fit and I ended up using a big flat file to smooth the running edge.

The turnout lever was taken from a Wren turnout that I bought second-hand. I had wanted it workable, but the throw from of the Wren turnout was too short for the PECO one and so it is purely decorative. The mechanism is operated by the upright nail (to the front) which I will model as a turnout sign. 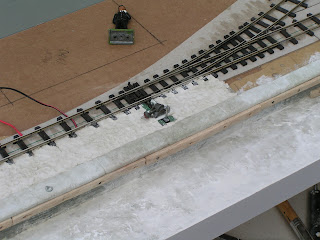 I wanted the track to be partially buried and have used DAS modelling clay to build up the groundwork to be almost level with the top of the PECO sleepers.

I should note that the track has NOT been pinned, I have glued the track in place with PVA glue and added plastic connectors to each end of the track (I don't want the scratch-built' engines to accidentally run off the ends).

The track has been laid onto 1mm thick light grey mounting card that I had spare. 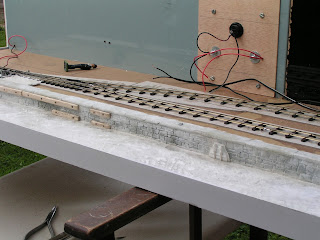 
Hey There !
My name in Joshua Stawiarski Co - Editor Of TalkWargaming.com

Sorry if this sounds like spam, I just wanted to drop a message here say thanks for all of your years in supporting the community and hope it can also continue far into the future.

Right now we are fighting the battle of looking for other content creators for our website but our reach doesn’t go as far we’d like.  We are wondering if you want to help us transform TWG with great pieces of work. We will provide as much value as we can to you, if you decide to take part, and to build a long-term working relationship.

Here Is A Link To Explain In More Detail:
http://www.talkwargaming.com/2017/10/content-creators-wanted.html

Looking forward to hearing from you,
Sincerely,
Co - Editor Of talkwargaming.com

Sorry If You May Get This Message Twice.