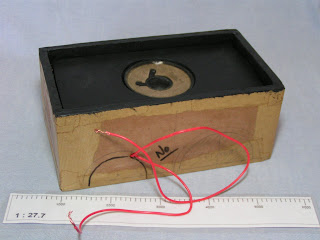 Following on from the earlier post. I have mounted a single speaker in to the top of the building blank. The speaker was taken from a transistor radio that I picked up from a charity shop in Worcester. There were no radios on display in the shop, but when I asked the man behind the counter he found a box full of old radios and I choose the SONY model as I thought it gave the best chance of a quality speaker.

I took the radio apart and stripped out the speaker and jack. The rest of the bits were put in to my 'spares box'.

The small round speaker was mounted in to a corrugated cardboard lid and glued in place with my hot-glue gun after I had tested it. As you can see the wires for the speaker exit the structure through the back. The speaker is 60mm wide.

I have started adding individual bricks to the front of the building. These brick slips were bought via e-bay from minaco-streamline101. I purchased three packs of 250 slips, two in Tudor Red and one in Weathered Red. The brick slips are meant for 1/24th scale dolls house modelling and so each brick needed 2 to 3 mm removed before they could be glued in place.

In the image below you can see the first brick slips glued in an arch shape to the front of the brick built building. I used a mix of fine filler and PVA glue to glue the slips in place. 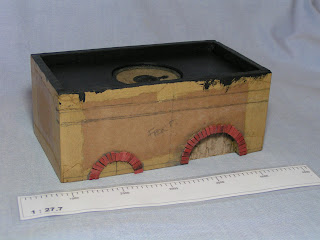 Finally; the inside of the speaker housing was painted black/dark grey as I will be building the metal salt pan above it and I didn't want any lighter colours showing through the open sides.