Yesterday, Sue and I attended the 7mm Narrow Gauge Association Model Railway Exhibition in Burton upon Trent. We set off early and were in Burton by 10.00 but parking problems meant that we were a little late arriving at the show. On entry to the exhibition I was surprised to see how busy it was and we spend the first period browsing the exhibits in the main hall. Later I found the competition area and here is my best approximation of the conversations I had with the competition judges.

Me (to judge No.1)
Is it OK for me to enter a model that is not 7mm scale?
Judge No 1
Yes. OK; Oh what scale is it?
Me
11mm = 1 foot
Judge No 2
What track do you use?
Me
16.5 Peco Crazy Track
Judge No 2
Yes Fine, pass the model over to me and I'll take some photos of it on the display stand.
Judge No 3
What does that represent?
Me
18 inch industrial narrow gauge.
Judge No 1
Well you had better hurry up as the competition entries shut in 5 minutes.

I had to rush back to the car and instead of picking up just the Green Diesel, I thought it best to take in the plastic storage box containing all of the models and figures I had packed as I was so pushed for time.

Back in the hall I took out the Green Diesel and filled in the competition form for the Don Mason Shield (Scratch Built Locomotives) and while filling the form in I showed the painted resin figures and the OSO Salt salt pan.

Judge No 1
You can enter that in the Earl of Crew (Buildings) category.

So another form to be filled in and some more models were brought out of the box.

So there I was with minutes to spare exhibiting three models in three different categories.

I took the plastic storage box back to the car and Sue and I continued to examine the diverse displays and browse the sales stands.

Around lunchtime Sue and I decided to drive into the town centre. I'd not visited Burton for many years - in fact the last time I was there was for my job selling wines and spirits to Bass Brewers. The town has changed quite a bit in that time but as it was sunny and we were in no rush we both enjoyed our time and even picking up some plants for Holly's allotment.

Back at the exhibition we arrived just before the AGM had finished and I was still browsing the stands (in fact - picking up some second-hand model making magazines) when Sue called me to say that I was being summoned - I was needed as I had won a prize.

Judge No 1
We need you for the group photo, you have won runner up in the Don Mason Shield. And I was presented with a Nosbert (see below). 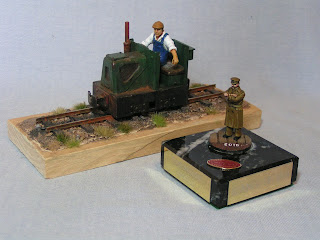 As I was standing waiting for the photos to be taken, I was approached by Judge No 2.
You've also been awarded runner up in the Earl of Crew Cup (again see below). 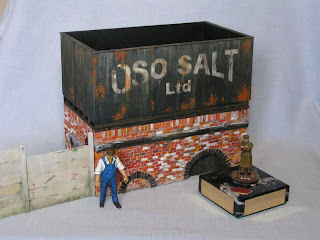 Then as all the competition winners were being lined up for the final group photo, I was once again tapped on the shoulder.

Judge No 3
You have also won runner up in the Howard Clark Trophy.

So in a juggling act, I had my photo taken with three Nosberts. (Nosberts are the nickname for the awards. This year they represent trench officers from WW1 which commemorates 100 years since the end of the Great War). 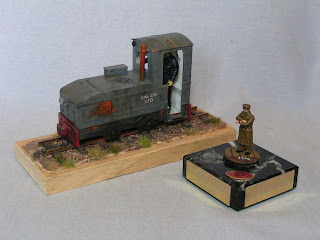 Back home I scoured the attic and found my earlier award from 1995 (minus the Nosbert as he is doing sterling work as a foreman on the Ogam and Stone narrow gauge layout). 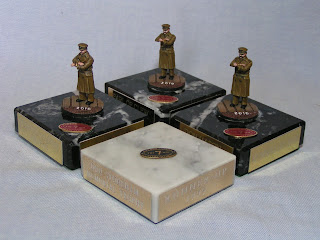 A great day out and three awards. I think I'll be doing it again next years which will be the 40th anniversary of the Association.

Glad you had a good day. First year I have missed in a few. Well deserved wins, would have liked to have seen the models in the flesh.
And glad you liked the nosberts. Was fun to paint something that crossed over my wargaming and railroading (yes I model us railways)
Leigh