Military Modelling Magazine gone..... Not quite. 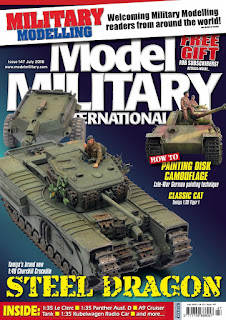 Over the last month I have read several rumours and claims that the long standing Military Modeller magazine is to close. At first I thought it was just the web pages or the on-line forums that were going but as time has passed it seems that the rumours were true as this post over on Missing Lynx confirms. Military Modelling was launched in 1977 and the last stand-alone edition was May 2018. 41 years of content which also included Battle - the wargaming magazine for some time.

I have a number of editions of the magazine in my 'to-keep' stash including some early editions and quite a few of the collectors editions and will be sad to see this stalwart of the model making community go. I look forward to seeing what Model Military International do with this new challenge but will miss MM.

I suppose that it was inevitable as even after reading the rumours I was not tempted to pick up the final edition, an edition that (in my opinion) was a little light on content.

"Is this the way forward?"

With so much content available on the internet and a lot of it available for free. Is this the beginning of the end for traditionally published magazines. Looking at the shelves of W H Smiths; I doubt it but a 41 year old magazine and one that I had regularly bought has now gone. Well not completely as MMI say that they will be keeping some of the regular themes and departments.

So long and thanks for all the memories.

It's a shame but then I haven't bought a copy in decades myself. My old stash is regularly gone through though.

I have twenty plus years of MM magazines in official binders.
How does one dispose of these in today's market?
Downsixer

"I have twenty plus years of MM magazines in official binders.
How does one dispose of these in today's market?"

I'm not sure. I tend to keep the odd one that has a relevant article or images that I like, but most are re-cycled via charity shops. The bulk of my own MM magazines are bought via charity stores or bargain bins for less than 50p each (sometimes as low as 20p).

Searching through e-bay there does not seem to be a great market for second-hand MM magazines so you really have to ask is it worth it?