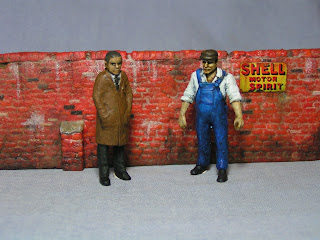 Work on the layout has been slow, I have managed to build some items of clutter (more on this later in the month and for the whole month of August) but with the hot weather and baby-sitting most of my modelling and/or painting has been done in short sessions while listening to The World Cup on the radio.

This latest post shows the brick wall section that will fit between the main end-on building and the OSO Salt salt pan. In the image above you get a sense of the height and detailing of the bricks. I wanted a worn and run-down look and decided that I just couldn't face placing individual bricks as modelled with the base of the salt pan. The wall section is modelled from 'pizza foam' - the foam that you find on the bases of frozen pizzas.

In the second image you can see the full section. The wall was modelled slightly longer than needed as I thought it was easier to trim it down rather than build it to fit exactly. The wall is 180mm long x 60mm tall and just 10mm thick. 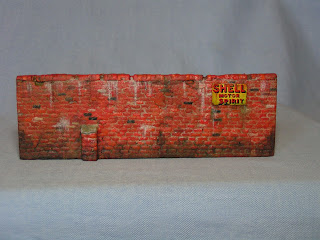 It was built on a corrugated cardboard core with pizza foam on the top and front. The individual bricks were impressed into the foam with the same brick making tool used for the earlier end-on building (see earlier posts).

Painting was done with a basecoat of cream/white and a number of layers of drybrushing over the top. Highlighting was done with washes and artists watercolour pencils. The SHELL sign was sourced from the internet and printed onto photographic paper at the local Boots the Chemists. It was stuck to thin card and weathered with acrylic paints and pencils before being glued in place. Once dry, I varnished the whole wall with Galleria matt varnish. 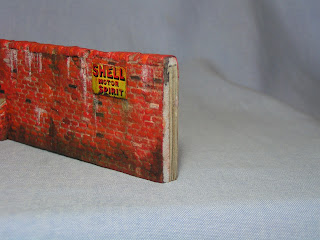 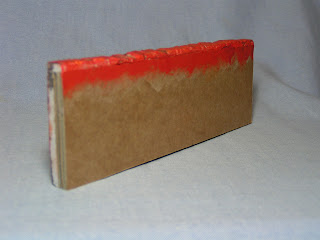 While this final image shows work-in-progress. 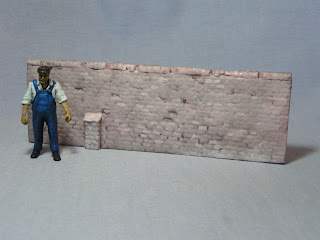