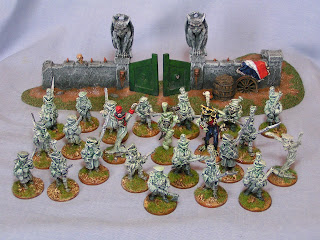 My original Witchlands Ghosts came about when I needed some Flintloque Undead at short notice for a weekend game. I had read of unpainted miniatures being used in a similar game with black undercoated minis being used as demons and white undercoated minis used as ghosts. Not being one to display unpainted miniatures on the wargame table I set about painting some ghosts following the techniques I had seen in White Dwarf - the Army of the Dead from Lord of the Rings. Details can be found in this earlier post.

I believe the original inspiration came from an article written by Steve Blease in Ragnarok - the in-house magazine of the Society of Fantasy and Science Fiction Wargamers or SFSFW in which black undercoated minis and white undercoated minis were mentioned. In addition there are ghost like figures featured on the box front of Deadloque - ghouls moving through the mist and fog which also inspired these figures.

Since the original set of 12 miniatures the group has grown to this regiment of 23 with mainly Alternative Armies figures, but also including a couple of conversions and models from other manufacturers all mounted onto 2p coins and painted with acrylic paints.

I have to admit to liking the effect however I am still at a loss as to how to use them in games of Flintloque/Deadloque. Should any reader have suggestions - I would like to hear them.

More details can be found on these Blog posts - here and here.

These look great. That ghost technique really does work well. There's something so incredibly appealing about the forces of the Witchlands. I have many a box patiently awaiting the brush myself.