These are not newly painted miniatures, in fact this group of Flintloque/Deadloque undead miniatures have appeared on the Flintloque Yahoo site. The figures were an experiment using up a batch of spare Flintloque undead - painted in a style similar to that used by Games Workshop to paint the Lord of the Rings 'Paths of the Dead' figures. I originally painted them over a White basecoat, painting them Blue/Grey, highlighting with pale Grey and even some pure White drybrushing. A heavy polyurethane varnish coat has added some discolouration, which I think looks OK.

Photo One - One of the thirteen Ghosts painted in this way. 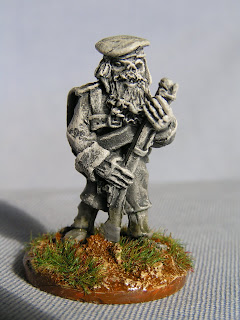 Photo Two - The same miniature with a Games Workshop THRAKA GREEN wash. The wash was applied in two diluted coats, to build up the effect I was after. I still think I could have gone further, but I was conscious that this is a relatively new technique for me and I did not want to over-do it. 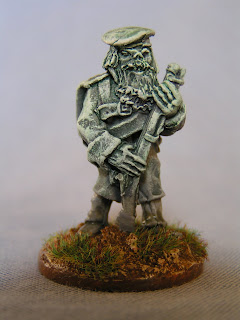 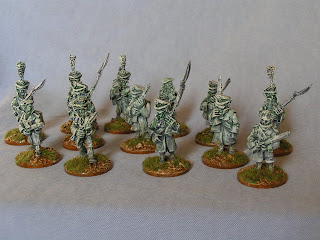 I think that the slight green tint has helped to add depth to the group and I am pleased with the effect. When first posted on the Yahoo Group there were a number of comments about how Ghosts could be used in both Flintloque and other game systems. In the time I have had these painted miniatures, I am yet to use them on the gaming table. On the plus-side, they were very easy to paint! I have not varnished over the top of the wash.