Dwarves in Tanks part one

My first couple of days of Blogging have featured Aeronef, Space 1889 and my scratch built models for these games. This months I will concentrate on my other interest - Flintloque.

The name Dampfpanzerwagon was made up some time ago to describe a set of Dwarf steam tanks that I had built and was building for the game Flintloque (Fantasy Napoleonics from Alternative Armies), see; http://www.alternative-armies.com/index.html.

I have been using the name for over three years and am now know as 'Dampf or Dampfpanzerwagon' on most of the Yahoo and modelling sites I belong to.

What follows is a set of articles about each of the seven steam tanks I have built. 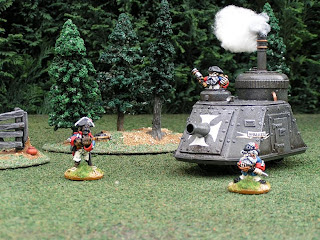 Or the development of the DampfPanzerWagon in Flintloque.

The Dwarves of the Confederation and League had long been able to harness the power of steam. They had been using steam pumping engines to clear water from their mines and steam ’mashing tuns’ in the production of beer. In the early ‘Lager Wars’ a simple steam wagon was built to deliver beer kegs in the disputed territory. The most famous example was the great steam barrel wagon that was lost while trying to deliver XXXX to the mountain stronghold of Piss Pass. Rumours still abound about the fate of this huge beer delivery vehicle, with some saying that the Ogres of the region have been a great deal less hostile since the loss of the ale!!!!

The invention (or development) of the DampfPanzerWagon is attributed to the great dwarf engineer Dr. Engleberger Von Humperdinkeller and it was his design, designated DampfPanzerWagon I or DPW I that was the catalyst for the whole range of steam powered, armoured wagons we see and hear on our battle fields today.

DampfPanzerWagon Ib (Turtle)
Built from ½ inch thick iron plates riveted to a steam powered chassis, the DPW I was hailed as a great breakthrough in ’black powder warfare’. The designer, builder and operator, Dr. Von Humperdinkeller was an engineer of the very highest standards and built the Turtle to the same exacting specifications, with a 12 hp steam engine, on board coal and water reserves, a steam powered cannon (a first) and precision optics.

The original design was for a two man(dwarf) crew and four wheel drive, but this was quickly increased to three; a stoker/steam engineer, an artillery officer/gunner and a commander/driver. The four wheel drive system proved to be too complicated and the DPW I was converted to two wheel drive and re-designated DPW Ib after it was attacked while broken down at the end of the Battle of Slutzes. It was at this battle that the crew and inventor (and father) of steam tank technology, Dr. Von Humperdinkeller were slaughtered by Ostarian Draggoons.

DPW Ib is painted black and carries the inscription “MACHANE HABERE EU” and red shield ‘house design’ of the Humperdinkeller’s. However the original colour scheme was white over blue with a wavy line and blue bird motif.

Special Rules
1 Due to being ‘over-engineered’ – ignore the first misfire or breakdown
2 Superior optics means +1 for amied fire
3 The design is flawed in one area, the enclosed design leads to over-heating and troops suffer a –1 after 6 moves to moral and –2 after 10 moves
4 Allied troops within 12 inches +1 to moral
Commander is armed with a blunderbuss pistol (loaded)

Construction
A cardstock structure was covered with 30thou plastic card. The boiler is a pencil sharpener with a steam chimney from a Wild, Wild West toy. Armour plating is 40thou plastic card with sliced rivets from plastic rod. The cannon is a bollard from the ornamental gate kit from Italieri. The turret are from a toy car kit topped with a hatch from Games workshop. The wheels are also from Games Workshop. The commander is from the Barron Von Rotte boxed set.

I am lucky enough to have a large double garage that we have converted in to a music room and games room for my two teenage children (and friends). The focal point is a pool table which when not in use we cover with a cloth to protect the playing surface.

In the summer of 2007 I decided that it would be a good excuse and perfect opportunity for me to build a wooden top for the table. In addition I could use the surface for wargaming.

A piece of chipboard was bought and cut to size and beading attached to the sides to act as a lip to keep the top secure over the pool table.

I painted the beading black and then wallpapered the surface with vinyl paper in a colour called 'Rust'. 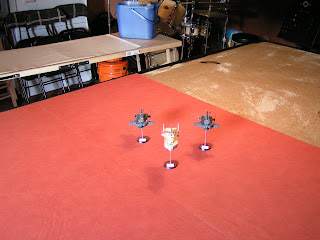 The first couple of sheets of wallpaper attached 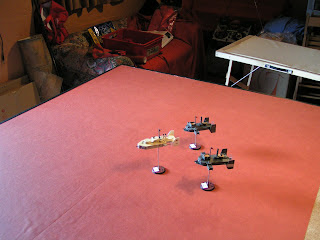 Once the whole top was covered I started to paint on some terrain detail, cliffs, shrub etc. 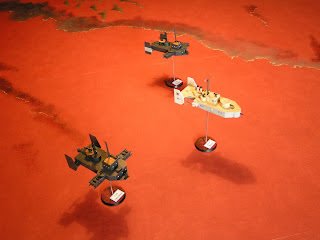 The first painted detail - painted with acrylic paints a wide brush and a sponge. 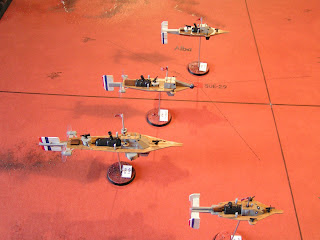 Once the terrain painting had progressed I drew grid lines (for two reasons - to hide the joints in the wallpaper and to make the table resemble a map). 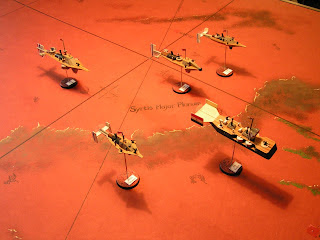 Even more added lines and detailing, a sort of cross between a map and a painted backdrop. 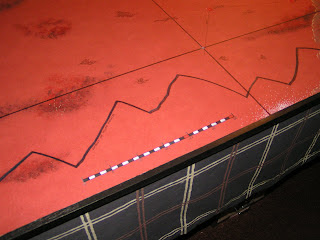 Then a scale refence - 20cms and 30cms. The wavy line is 'The extent of the polar region' something I saw on a Barsoom map. 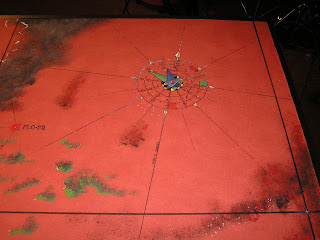 Next was a compass - again taken from a Barsoom map. 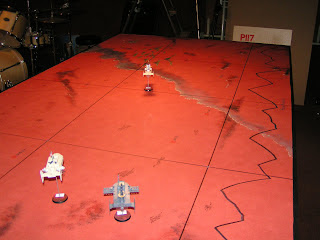 The table top almost finished and seen from the West. 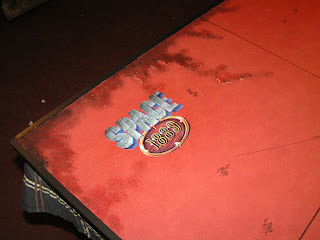 I even added this Space 1889 logo - however I have now removed it as the illustration was damaged during play. 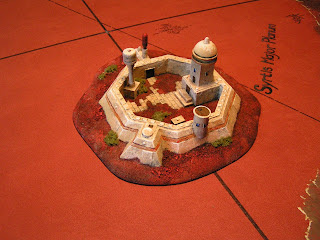 3D terrain can be added during play - this is Fort Kell Ben, scratch built and mounted on MDF. 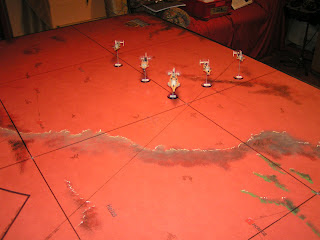 The whole board looking East with the British fleet on patrol. In addition to the painted terrain, I have added names taken from either the Barsoom maps or actual maps of the planet Mars.
I hope that you like it!
Tony

I recently ran out of GW 40mm round bases and tried to pick them up at my local GW store.

Why can't I just pick them up at the local GW store?

These notes were first posted in the Wessex VSF Yahho Group and are suggested altitude rules for the game Aeronef from Wessex Games;

There are 6 altitude levels. They are – Ground, Very Low, Low, Medium, High and Very High.

The altitude level is noted by placing a D6 on or near to the base of the vessel with the D6 number relating to the current altitude. eg. a D6 number 1 = Ground (landed/crashed!), D6 number 2 = Very Low , D6 number 6 = Very High etc.

A vessel may not climb above Very High!

All vessels can shoot at targets which are at the same level.

All vessels can shoot at targets which are up to three altitude levels above them eg. a Nef at Very Low could shoot at a target at Very Low, Low, Medium or High.

Vessels can also fire at targets which are at a lower altitude level provided that the range exceeds the altitude level X 10 eg. a Nef at Medium altitude level could shoot at a target at Very Low altitude level as long as the range was twenty cms or more. Note; some Nefs or Digs may carry guns in special mounts which specifically allow downwards fire, but these are rare and details of such mounts must be noted on the vessel profile cards.

Nefs, Digs and Kites can change altitude by the following amounts with no disadvantage to speed/turning.

Note; All non-military, transport and cargo vessels can only change altitude, climb or dive by one level per turn.
Posted by Tony at 00:33 No comments: 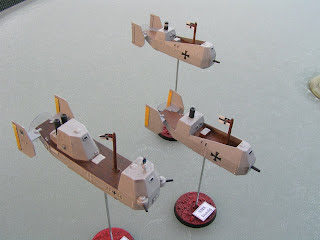 Following the construction and painting of the three Hamburg class gunships I saw a sketch on the Squirmydad web page/blog of a German Cruiser rough jpg.
http://www.mayheminpaper.papermakeit.com/Squirmydad
I decided to build a model of this aeronef. 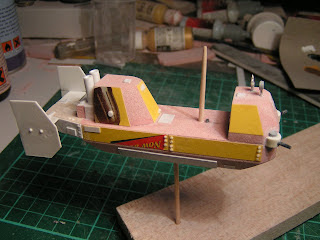 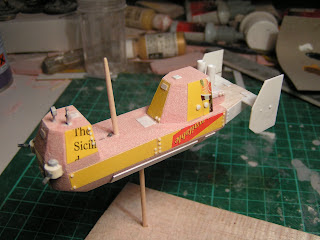 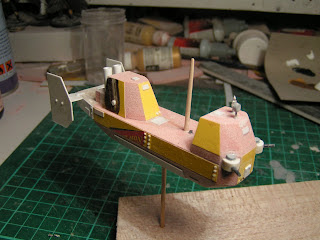 The main construction and detailing follows the same procedure as that for the Hamburg class gunships (detailed below), the only deviation from previous builds was that I did not produce a sketch myself, but used the jpg from Squirmydad and built the model using SMS Hamburg for scale.

Painting was very much the same as the SMS Hamburg models, I even used the same colours and markings. 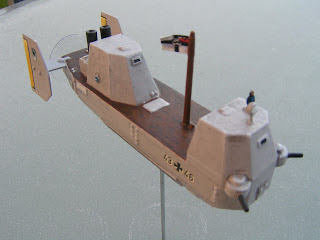 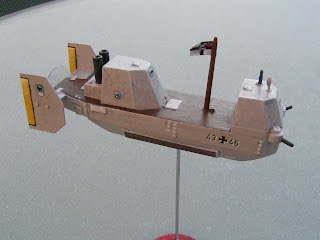 There is not a lot that I can add, the model is just a bigger Hamburg - and this is the first time that I have added a crew member to my 1/300th scale Aeronef's - field gun crew from minifigs (I think).

My latest project is a 1/300th scale 'scratchbuilt' model of the airship Hyperion from the Disney film 'The island at the top of the world'. See;
http://ecx.images-amazon.com/images/I/61STG3KQZCL._AA240_.jpg
The airship is also featured at EuroDisney in Paris and is modelled as part of the main restaurant complex, similar to this illustration;
http://www.jimhillmedia.com/mb/images/upload/discovery_bay_print_balloon.jpg
My first job was to draw the airship - as; 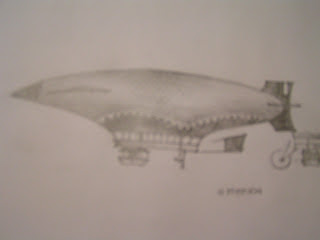 The illustration was taken from the Wikipedia page;

The main envelope was constructed first from 'blue' foam which was cut to profile and then plan. I then carved the rough shape with a modelling knife and sanded the shape with medium and rough sandpaper.

I was not to fussed about a final finish as working with 'blue' foam it is very difficult to get a smooth finish.

The rest of the construction can be seen in these photos; 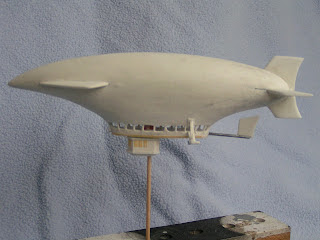 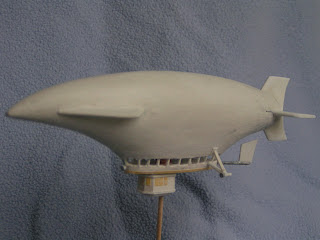 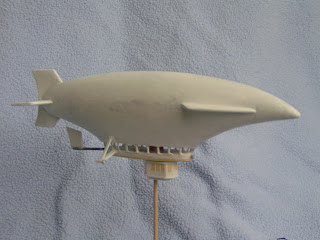 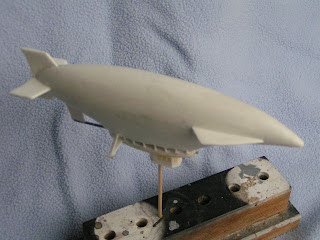 In truth, once the envelope was constructed the rest of the model was very easy, the only hiccup was the attachment of the small window bars to the bottom of the envelope

Painting is moving on apace - and here are a some work-in-progress shots; 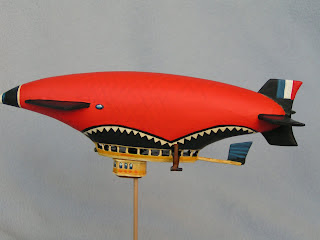 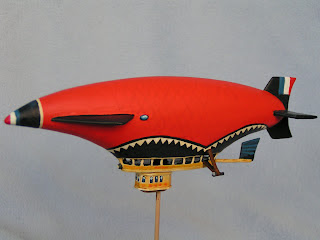 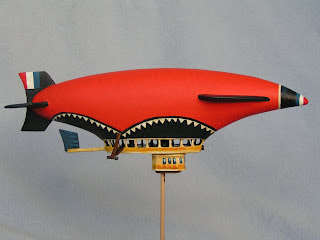 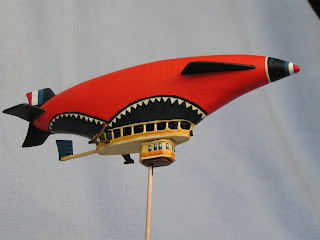 There is still work to be done, but these photos show the model nearly finished, I hope that you like them 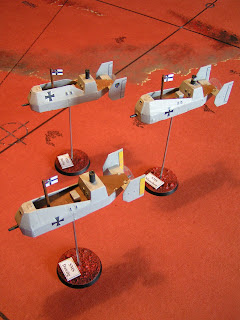 The first photo shows the finished group of three Hamburg class gunships; for more details and how they were made see below, 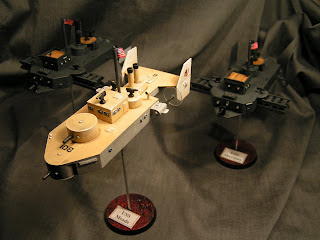 and the second shows USS Meade leading a flight of two Eagle class gunships; again, for more information on how she was built and painted see below.

I have had three workbench articles featured on The Miniature Page and thought that I would included them here to give a feel for my style of work;

First we have a feature from 14th February, 2008 - the construction of a Jasta of SMS Hamburg class gunships. Scratch built models from Space 1889.

Then two linked features from February 2007 - the construction and painting of a USS Meade, again scratch built models from Space 1889.

I've got a Blog

I've just started a blog that I hope will in the future contain photos and articles of my modelling, painting and wargaming interests.

I will try to keep it up-dated
Posted by Tony at 07:09 No comments: