Models For Wargamers is now available to order 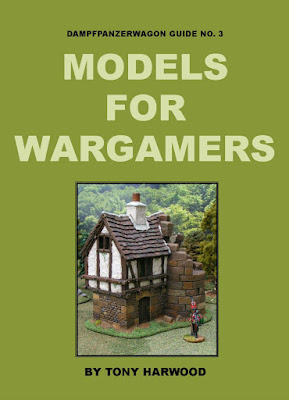 Dampfpanzerwagon Guide No. 3 - Models for Wargamers is now available to order.

Models for Wargamers, like the earlier two guides is a 'step by step' guide showing how I scratch-build my models, buildings and terrain. It features easy to follow and well illustrated steps from conception, through construction and finally painting. I have tried to add text that compliments the colour photos and gives hint and tips on how you can build similar models for your own gaming table. The projects range from simple entry level structures to detailed and intricate models that can then be cast in resin.

The first 100 copies will be signed and numbered.

The books will be sold for just £12.50 (updated on 16.07.18) each. Payment via (old fashioned) cheque or Paypal.
Should anyone wish to order a copy of the book, could you please e-mail me at;  dampfpanzerwagon@yahoo.co.uk With your full name and address and your Paypal account details (so I can send you an invoice).


Please include - Models for Wargamers in the e-mail.

Each copy will be wrapped in clingfilm, enclosed in a custom card wrap and posted via Royal Mail.

(Anyone who wants the book/package to be signed for - please contact me at the time of ordering and I will amend the P&P cost).

Update 1
The first 37 books were posted out prior to the official launch at Alumwell 2017.

Update 3
The first review; From Kris Marquardt of Wargames and Railways is now available. For full details please see this post. Thank you Kris, I'm glad that you enjoyed it.

Update 4
The book has been featured and reviewed in issue 90 of Wargames, Soldiers and Strategy. See this post for further details.

Update 5
The first 50 books have now been ordered and sent out.

Update 6
The first 60 books have now been ordered, sold and posted. Thank you

Update 7
The remaining books have been reduced to just £12.50 and the P&P costs have been amended in line with More Wargame Terrain
Posted by Tony at 00:41 8 comments:

A couple of books from the library 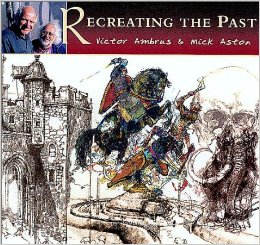 Sue and I visited The Hive, the main library in Worcester and I picked up these two books on loan. The first is Recreating The Past by Vistor Ambrus and Mick Aston, the on-site artist and presenter of Time Team, a TV archaeology programme. And The Pen and Ink Book by Jos. A. Smith which is a hard-backed book describing materials and techniques for artist's. 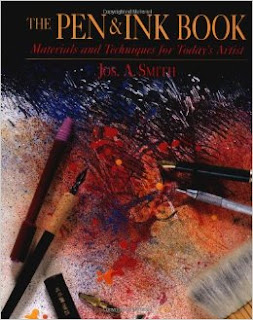 Both have proven to be great reads, the first giving lots of inspiration and the second helping me to improve my drawing skills. 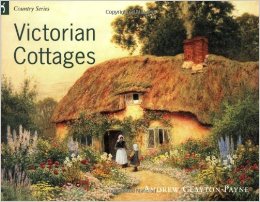 Here are three recent book purchases. The first was bought for me by Sue and is an illustrated book of paintings and watercolours showing the Victorian ideal of a country cottage. Victorian Cottages (part of the Country Series) by Andrew Clayton Payne. The book is full of inspiration for future models. 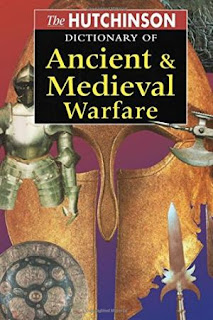 Secondly a real find - again a gift from Sue who has a way of finding these fantastic little gems. The Hutchinson Dictionary of Ancient and Medieval Warfare. It was picked up for just 50p. 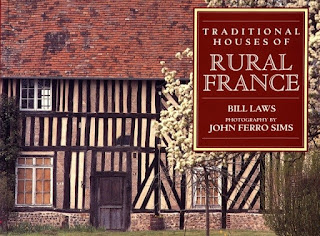 Finally a book found by me in a charity book shop, Traditional Houses of Rural France by Bill Laws. The book is jam-packed with colour illustrations of beautifully photographed rural houses. Just my type of book. This one cost just £1.00. 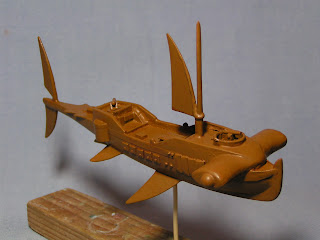 The Build Something Contest on Lead Adventure update.

The entries are in and we are just awaiting details of the contest rules and how the entries are going to be judged. Good luck to everyone who entered and commiserations to those brave soles who's entries were not able to be completed in time.

Here is just one more image of the Hammerhead. Showing the painting started. 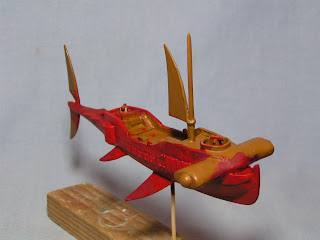 I will post details once the contest is live.

The West Midlands Military Show - Alumwell is less than a month away. Regular followers will know that it is my intention to be an exhibitor at the show and if all goes to plan, use the show to launch my new Dampfpanzerwagon Guide No. 3 - Models for Wargamers.

At this moment the book is still being formatted and it will be a close run thing to get the production, printing and packaging all ready in time for Sunday 12th March 2017. 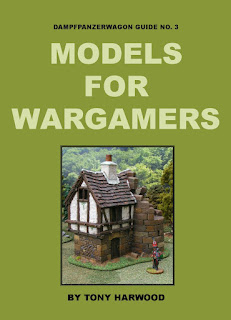 I happen to think that Alumwell is one of the friendliest shows on the circuit, but this might be because it is my local wargame show and I tend to meet up with old friends. Either way, I would hope that if you are attending you will stop by and say hello. 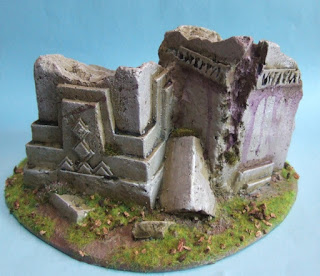 These are some painted examples of the Troglodyte Pillar terrain pieces for Panzerfauste. The originals were sculpted by me some time ago and then cast in resin by Hysterical Games.

The models were expertly painted by Hannah of Hysterical Games and although I would not have thought about using a purple wash, I think they looks fantastic and very atmospheric. 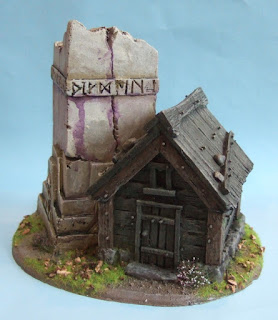 At this moment the models are not available to purchase via the Hysterical Games webstore, however if you were to contact Rob (or Hannah) of Hysterical Games I am sure they would supply more details.

The images were used with permission. 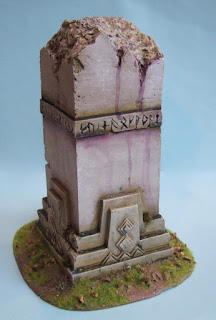 Although the models were designed for Panzerfauste, I am confident that they could be used in many different game settings and genres.

Orcs in the Webbe 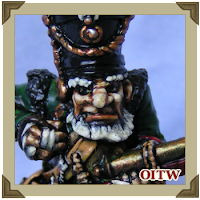 Image borrowed from Orcs in the Webbe

Earlier this week, I was checking back on some articles that I had written for Craig Andrews of Orcs in the Webb and while looking for the particular story, I realised just how much information I have on OITW. For details of the three pages of stories, articles and step-by-step builds, go to this link. 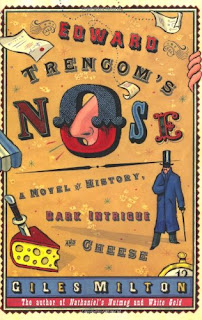 This particular novel was bought for my Mother-in-Law as a Christmas present and after she had read it, I thought that I would give it a try. Edward Trencom's Nose - A Novel of History, Dark Intrigue and Cheese, is a little difficult to categorise as it does not sit in any one genre. Giles Milton has succeeded in writing a story that combines historical fact with fiction as well as adding humour and intrigue - then there's the cheese!

A fuller review can be found here.

I found it a great read, full of humour and interest, the descriptive comments about cheese and particularly the one chapter describing a flood were some of the best descriptive writing I have read for some time. Highly recommended as a Jolly Good Read.

How to Sharpen Pencils 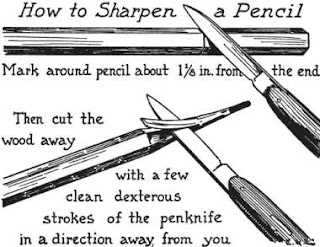 Earlier this week, I met with an 'old school' craftsman who was installing a fitted kitchen in to a neighbours house. I needed to make some notes and was about to pick up his sharpened pencil, when he stopped me saying that I could not use his pencil! His pencil was used for marking out only.

The pencil was a standard Steadtler, nothing special, but it was tapered and sharpened to a very fine point.

Are you aware that there are professional pencil sharpeners? See this you tube link for details.

Needless to say, I have been trying to perfect the technique, so far with only OK results. 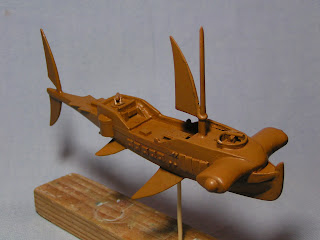 With the construction finished, here is the promised image of the undercoated model. I have used Vallejo Game Color Leather Brown as both a primer and an undercoat plus a Sepia wash to highlight some of the sculpted or modelled detail. Both the paint and the wash were applied with a medium sized soft hair acrylic brush and I used some Klear (Future) as a medium to get the smooth finish.

The final image shows the Hammerhead Shark posed alongside a Vallejo dropper bottle, as I had been asked in earlier posts to show the model alongside something to show the size and scale. 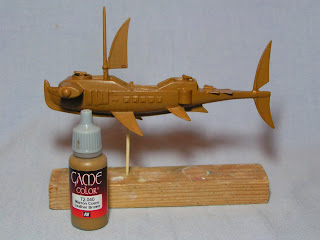 I am confident that I will meet the deadline for the contest - the painting and a base are all that is now required.