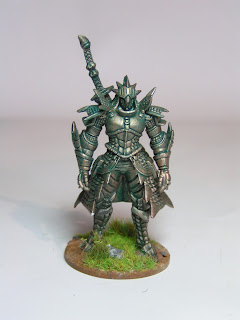 Living Armour for The Silver Bayonet

Regular readers of the blog will be well aware that the new game from Osprey Games - The Silver Bayonet written by Joseph McCullough has been a major inspiration to me, allowing me to re-visit my collection of painted and un-painted Flintloque miniatures and search through my 'bits box' for suitable 'stand-in' minis to use in the game.

This plastic toy figure was bought in Bangkok over ten years ago and had been relegated to the bottom of my 'bits-box' destined to never see the light of day again. That is until I started searching for a suitable miniature to use as Living Armour. 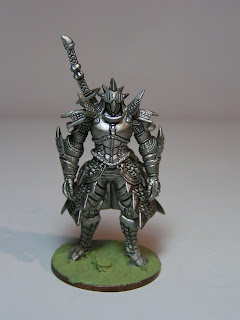 The plastic kit is similar to the small clip-together models which can sometimes be found in Kinder Eggs. In this case a five piece kit moulded in silver.

I mounted the model onto a pre-decimalisation penny and built up the base with Milliput before painting, washing and varnishing the figure. The final image shows the Living Armour alongside a Flintloque RifleOrc. The Living Armour model is 50mm tall (head to toe). 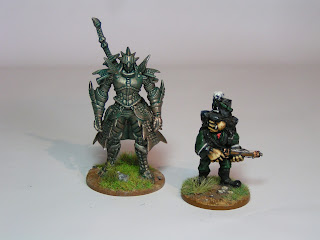 Prior to choosing this base model to represent my Living Armour, I had looked at a number of metal and plastic figures, but nothing inspired me. This Anime style figure had been bought with the intention of painting it as a stone statue (many years ago) but I think it works perfectly as a 'stand-in' Living Armour proxy.
Finally, I should add that I chose today's post from a selection of about five finished Silver Bayonet painted and based figures as I wanted to show something completely different from the normal knight in armour figures that are usually used in SB. I hope you like it.
Tony
Posted by Tony at 01:21 No comments: 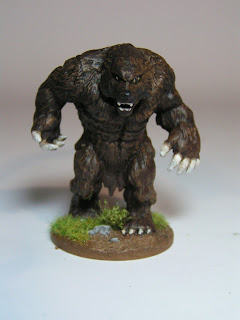 This is another one of my Flintloque/Silver Bayonet miniatures. A converted Ursa Major bear 102 from the HeroClix Captain America set.

The model was mounted on to a 2p coin with the groundwork built up with Milliput and additional texture added with sieved stones and sand applied over PVA glue. 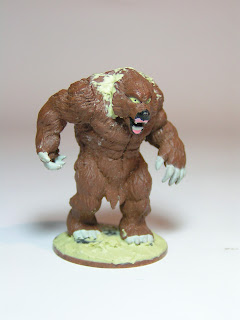 The bear was painted in a much darker 'black bear' colour scheme and varnished with Galleria matt varnish before the base was decorated with static grass and tufts. 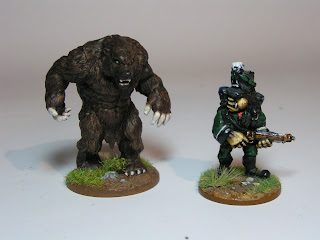 The final image shows the werebear alongside a Flintloque RifleOrc. The bear stands 50mm tall. 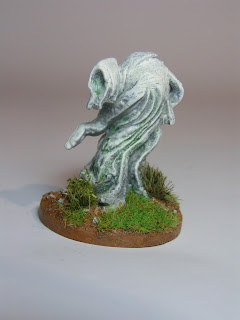 Another mini from my 'spares box' - this time a plastic ghost from a D&D box set.

I thought the model was a little too short so mounted the plastic figure on to a piece of thick plastic card and rebuilt the lower edge with Milliput. The base or groundwork was modelled from DAS and additional texture was added with sieved stones and sand applied over PVA glue.

The paint scheme was a simple white over pale grey with some light green washes on the lower edges. 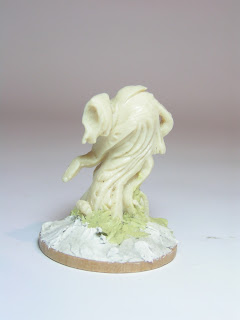 The final image shows the finished model alongside a Flintloque mini. The ghost was mounted on a 35mm round wooden counter and stands 35mm tall. 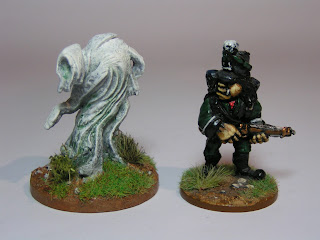 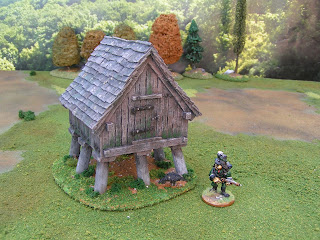 The latest issue of Miniature Wargames (issue 466 - February 2022) features this scratch built storehouse which was built and painted by me. The model was inspired by a wooden structure found on the internet and modelled from corrugated cardboard with scrap stripwood and egg box card. 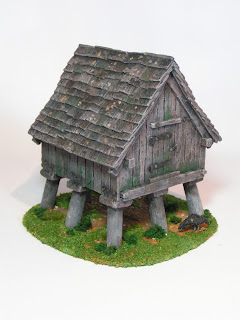 For more information, see this link. Or pick up the magazine from your local supplier/store. 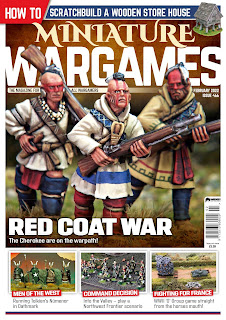 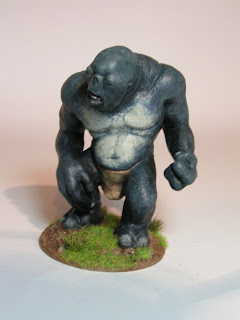 A Troll for The Silver Bayonet

This is a Lord of the Rings Troll - actually a LOTR key ring model that was bought many years ago and had been based and undercoated on two separate occasions prior to this incarnation. The model is mounted on to a 50mm metal washer with the groundwork built up from cork and DAS. 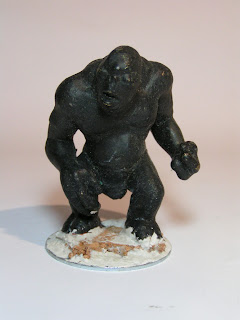 I had seen that others have used GW LOTR Troll models for The Silver Bayonet Troll and I knew that I had this model in my 'spares box'. I undercoated the model in gloss varnish and then black acrylic paint before building up the skin colour by speckling with an old brush. 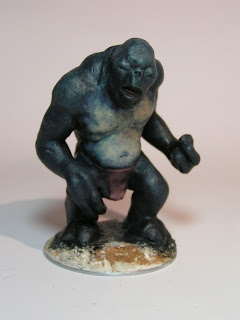 The model stands over 75mm tall and dwarves this Flintloque RifleOrc model. 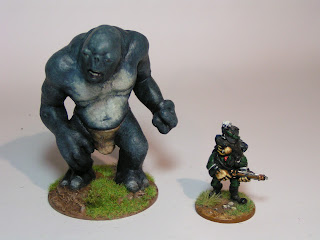 It has been my intention all through this project to try and use models that I have stored away and un-loved in my 'spares box' or pick up second-hand figures from Worcester Wargames, rather than purchase 'special' sculpts new, this is a perfect example of re-using figures that would otherwise have been left un-finished.
Tony
Posted by Tony at 01:10 2 comments:

Markers for my Flintloque/Silver Bayonet cross over - part two 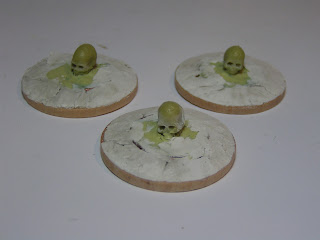 This is another set of wound markers for my Flintloque/Silver Bayonet cross over project. The skulls were cut from some soft plastic toy skeletons which were bought some time ago then mounted on to wooden counters with the groundwork built up with DAS modelling clay before being textured with sieved stones and sand. 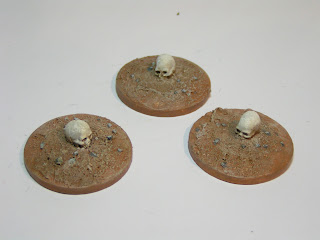 I painted the groundwork first then the skulls before varnishing with Galleria mat varnish. 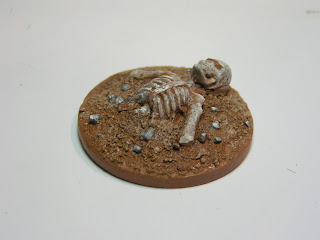 This counter used the upper body of the plastic skeleton with the back first cut and then sanded flat. 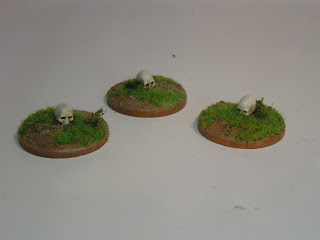 Finally the markers were decorated with some static grass and tufts applied over a mix of PVA and superglue. 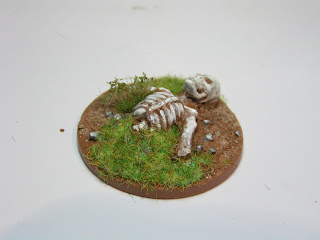 The simple markers were great fun to model and paint and once again used up models that would have otherwise been left in my 'spares box.'

Markers for my Flintloque/Silver Bayonet cross over 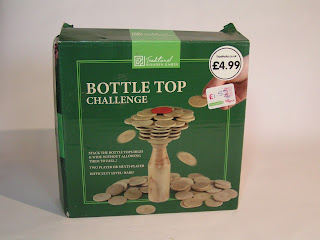 Regular readers and followers will know that the new game from Osprey Games - The Silver Bayonet has meant that most of my modelling time over the Christmas and New Year period has been either building a Silver Bayonet themed gaming board or painting miniatures for the game. In addition, I have been working on a number of gaming or objective markers and here are the results so far. A group of three wound markers made from wooden counters, DAS modelling clay and some skull castings that I had picked up many years ago. 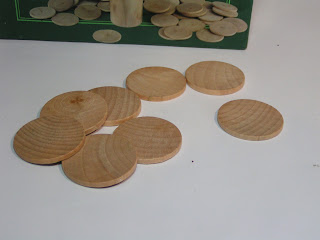 The wooden counters are from this Bottle Top Challenge game and are 35mm diameter and 4mm thick. 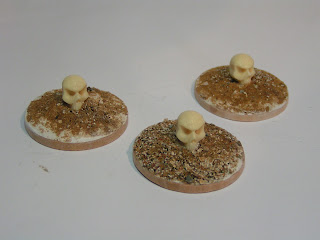 The final two images show the modelled and then the painted markers varnished and decorated with static grass and tufts. 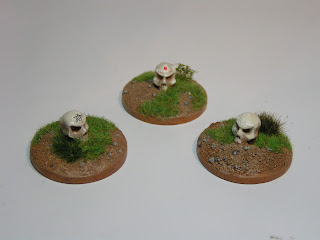 I have already modelled a dozen or so markers and will include details over the next couple of weeks. They have been great fun to build and have meant that I have had to be inventive with various bits and pieces from my 'spares box'.