Aeronef - The Knights of St John

My latest Aeronef project, a group of six scratch-built Aeronefs. The models portray part of the huge fleet of Aeronefs sent by the Holy League to defend the Mediterranean against the Nefs of the Ottoman Empire at the Third Battle of Lepanto in 1898. In particular The Knights of St John contingent.

Photo One - The full fleet, prior to ship name plates being added to their bases. 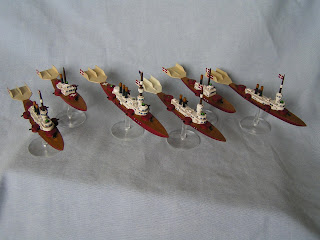 Photo Two - The construction process. From left to right; The hull master carved and modelled from layers of plastic card, the first three hulls, cast in car-repair resin (bought from Halfords) and the mould, which as you can see is badly damaged. The damage happened when the mould was made - I added too little mould material, not enough to fully cover the hull. In the end I managed to get six OK castings. 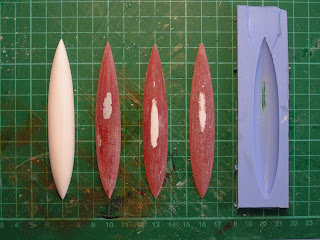 Photo Three - The first three hulls, in this case the three Galleas Models with the tails added. 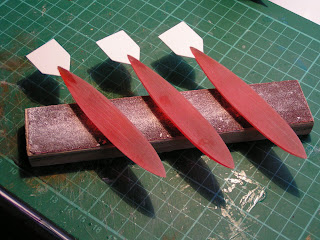 Photo Four - The six cast hulls, three are as above, two have sections cut from the middle to make them smaller (Galley's) and the final model is two hulls cut and glued together to make the Galleon or Flagship. You can also see where I have used filler to re-model the section of the hull that was mis-cast due to the mould being damaged. 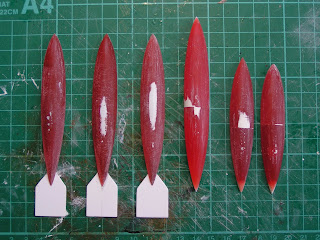 Photo Five - Work-in-progess shot, the tails and the out-riggers for the hull turrets have been added, these are made from sections of knitting needle, sawn in to thin discs, then cut in half and super glued to the hull sides, easy to do, just time consuming.
The larger hull has an additional layer of 1mm plastic card added to the deck to build up the size of the hull, while the white circle and small dots are more filler added to bubbles in the resin casting.
For scale purposes, each of the small squares is 1cm x 1cm. 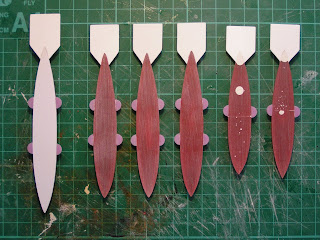 Photo Six - As above, but now with the main deck structures in place made from 3mm thick plastic card. Most of the construction is done with medium super glue and accelerator. 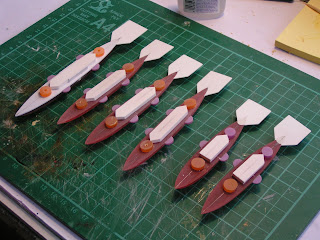 Photo Seven - A group photo showing most of the construction completed. 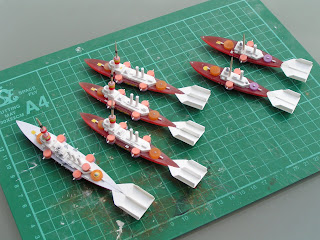 Photo Eight - The main Galleon or Flagship Real or Reale. 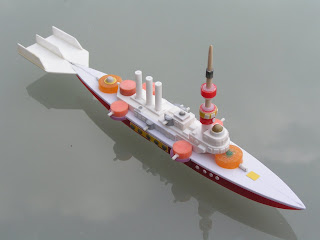 Photos Nine and Ten - The Three Galleases, first a single Aeronef shot, then as a group of three. 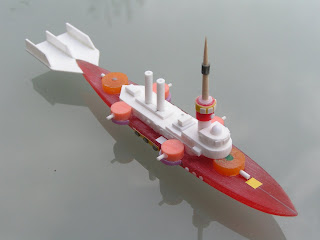 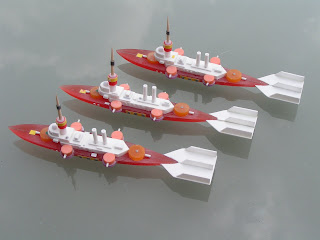 Photos Eleven and Twelve - The smaller Galley's, less well armed, but faster and more maneuverable. As you can see I have tried to keep a 'family resemblance' to all six aeronefs, while adding some variety.
Materials used include more plastic card, plastic rod, more knitting needles, sections of sprue, cocktail sticks and sticky labels. 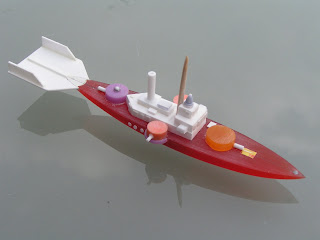 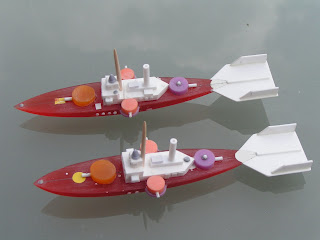 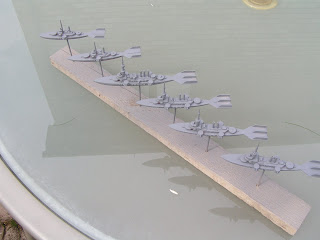 Photos Fourteen and Fifteen - The finished Galleon or Flagship Real, please note that the flagship is flying the standard of the Holy League or Estandarte Liga Santa and not the more usual cross of Malta. 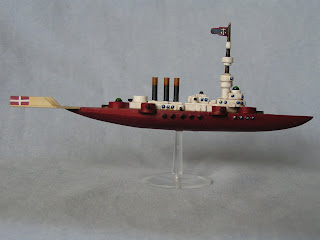 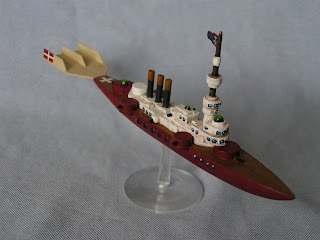 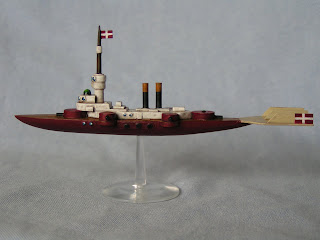 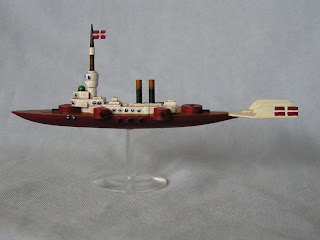 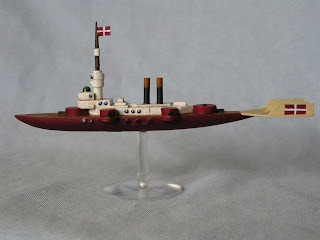 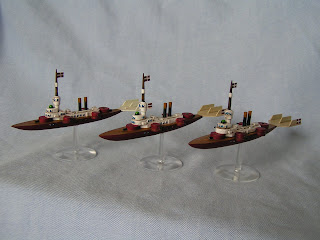 Photos Twenty,Twenty One and Twenty Two - Show the finished Galleys. 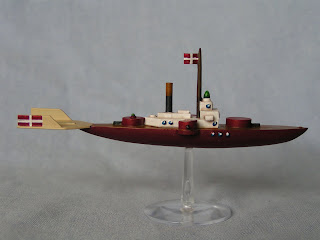 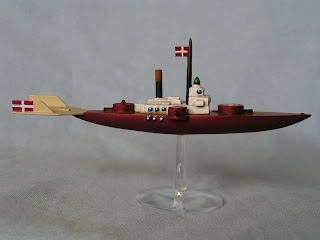 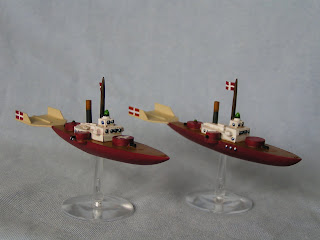 Photo Twenty Three - Another group photo of the completed fleet of Aeronefs, The grand fleet of the order of St John, Malta. 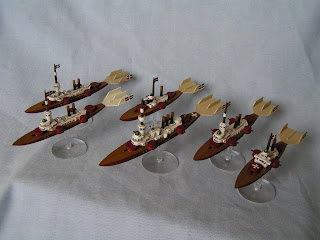 The models have been great fun to build and paint, they have taken about three weeks work (on and off) from start to finish, however the idea has been 'brewing' for some years. I am pleased that I have finally realised this idea and now look forward to a break, or maybe building a sister fleet of Aeronefs from The Papal States to support them. But then I will just have to build an Ottoman fleet to game against!

The mishap with the initial mould was a bit negative, but the project still went ahead and the damage to the hulls, through the hole in the mould, had very little effect on the models. The colour scheme is not an original idea, but is in fact copied from a similar Knights of St John Aeronef model by Vanvlak and seen over on the Wessex Games Victorian Science Fiction Yahoo Group. The hull colour is a mix of Games Workshop Scab Red and Blood Red, the first time I have used Scab Red and I am very pleased with the result - sort of Plum Red.
Future plans include checking-out clear plastic, hexagonal bases, rather than the round ones.
Tony
Posted by Tony at 08:55

There you go tempting me to try and cast up some hulls for my nef fleet.

So gun-shy on this. A lot of materials that are eitherh ard to find or cost a lot.

I'd never have thought of using car repair resin - great idea Tony! Models (as ever) fantastic...

Resin from car repair superstore - less than £10.00 for resin and hardner. Then two part moulding putty from an art shop - another £9.00.

Not a huge out-lay and already proven to work.

I have often looked at some of the more expensive rubber mould compounds and modelling resins - you can easily double the costs!

The idea - using car repair resin is not mine, I read about it is a model airplane magazine/book.

The part to be cast was pressed into Playdough (the childrens modelling clay) and when removed the part was cast with cheap repair resin.

I have not tried the Playdough method, but have cast in plasticine and two part moulding putty (available from art stores).

If I can, the next time I cast I will take more photos.

I'll have to look into finding the materials and giving it a whirl. I can come up with a few projects where some resin work would help me out. Not too many art stores around though.

Try a garden center that sells craft bits for the molding putty - the local one here sell it for casting resin models :-)

Tony: Great stuff, as usual. I'll post a link from my blog, though I would be surprised if anyone needs to link form me to you, as I think we share an audience, so to speak.

Eli: I have some of the putty. Got mine at Michael's, but Hobby Lobby should have it as well - I've seen it there, too. It's easy to use. I used it for the deathray saddles.

A very inspiring work, indeed. So much so that I will try and get up off my posterior and build some Nefs myself. I'm thinking Prussians vs. Hanseatic League, background to be determined.

Anyways, to do so, I would very much appreciate some tool tips, specifically:

(2) How do you cut the thicker plastic materials (knitting needles, plasticard etc.) Exacto?

(3) What do you use to sand? Sanding paper, files, Dremel tool?

Could you help me out with that?

What type of filler?
I use a variety - Milliput, Green Stuff, Humbrol Model Filler and for big jobs, Isopon P38.

If I had to make-do with just one, it would be Milliput (the White variety).

How do you cut the thickest plastic card, Knitting needles?
For the plastic card, up to 3mm thick I use the 18mm Snap-Off blade knives - I have a very good OLFA 18mm knife that I have had for many years but I am not sure they are still made - try OLFA or Stanley.

For the Knitting needles, I use an EXACTO modelling or razor saw, they are available in most modeling or craft shops, the best advice I can give you is buy the expensive blades, they last much longer. To cut Knitting needles I use smooth slow strokes and at the same time roll the knitting needle across the bench, by doing this you get a better shape, than just cutting through. I do use a small vice if I have lots to cut (for example - the turrets on the Knights of St John Aeronefs), but use the same saw.

What do you use to sand?
Three main tools, they are manicuring nail files, which you can buy from chemists, take a whole variety and see which best suits you. My favourite are from Poundland, three for one pound and on the back they have small half beads, which can be used for making turrets or look-out domes.

Secondly I have a sanding board, this is a glass chopping board (make sure it is toughened glass, again try a DIY store or even a cooks shop) and on to this I attach 3M's Aluminium Oxide sandpaper with double sided tape, when the paper gets worn, just replace it. Also if you like you can have one board with one grade and another finer paper on a second.

Lastly - sanding sticks - these are custom made, but very easy to make - take a strip of wood (in the past I have used wooden rulers), my sticks are all sorts of shapes and sizes, but here are the details of one; 200ml long, 40mm wide and 15mm thick. To one side I have attached a medium grade Aluminium Oxide sand paper and to the other a fine grade with double sided tape.

The sanding sticks are a great modelling tool and very easy and cheap to make. You can either use them like files, or place them on the desk and sand the pieces across the top.

Finally invest in a good super glue and accelerator, try building merchants, they are much more expensive, but are ment to hold double glazing units together for years!

I hope that this helps. In fact I'll try to up-load pictures and a more detailed description of these tools and techniques later.

Excellent thank you very much. Let's see how much of this a German DIY store can rustle up...