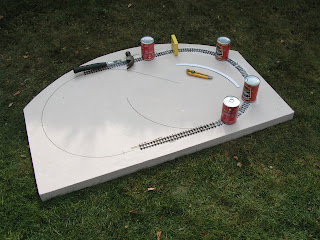 I have used lengths of Peco 'Crazy Track' or O-16.5 narrow gauge track to form the bulk of the design. The flexi-track was glued down with PVA glue with the odd pin or nail to hold the shape while the glue dried. As you can see I have used some tins of soup to hold the track in place.

The white plastic former (top right of image) was built by me and used to ensure that the radius of 30cms was constant across the curves. One lesson that I have learnt when laying track is to ensure consistency. 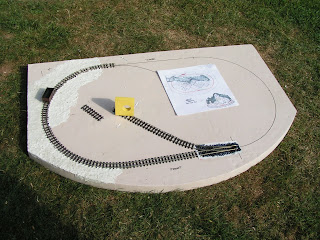 The first turnout was installed as per the plan, at the front of the layout. It is a standard HO-OO turnout (I will remove or modify the sleepers later). The turnout was mounted on to a piece of thin plastic card coloured with a black marker pen (I didn't want any white showing through under the turnout sleepers).

To the left of the layout, I have started to add DAS Modelling clay which will blend the sleepers in to the groundwork.

All track joins have been soldered with additional power feeders mounted under the layout. 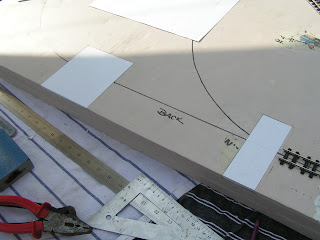 The final image shows how I have used some 5mm thick plastic card to act as a firm base for the turnout actuators. My plan is to have sliding switches at the rear of the layout which will work via wire-in-tube and operate the three turnouts. By mounting these sliding switches on to the plastic card which has been cut into the 5mm thick foamboard I should have a firm and level baseboard on which to carry out further work.