Firstly, I must apologies for the delay in bringing you part thirteen of this building thread. Back in August 2008, this Flintloque themed building was my main modelling project, but a couple of short deadlines meant the whole building was shelved and when I started my DampfWerks business the Large Farm House became a portfolio piece that has been used to show my scratch-building skills. In addition I modified the model and removed the commercial castings (the barrels and cases from Grendel) in the hope that I could have it cast in resin and sold. 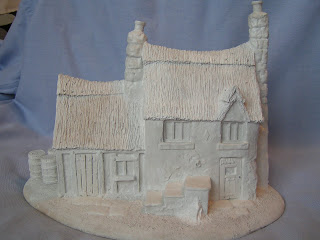 The whole building thread can be found on this Blog (see Flintloque Labels). These photos show the modified and finished model which will now either be painted or cast in resin if I can muster enough interest.
The model was built to 'Flintloque scale', approx. 1/48th or 36mm. and is 19.5cms x 18cms and 18cms tall (to the top of the chimney). The style is 'cartoony', English Civil War or French Country style and unlike my more recent models does not have a lift-off roof or internal detail. 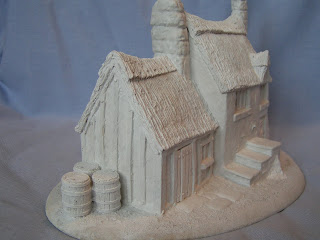 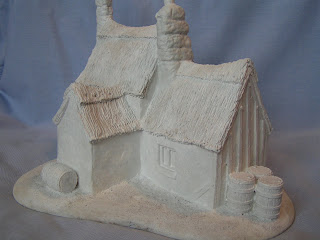 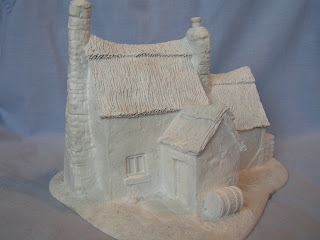 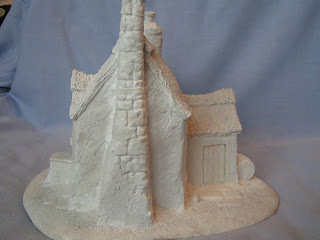 The final two photos give a better impression of the whole model and the amount of detail incorporated in to it. 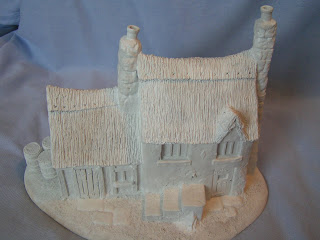 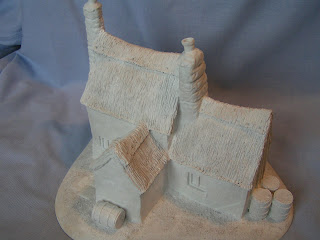 To have it cast I would require at least 12 firm orders, this is to cover the extremely large amount of rubber needed for such a building. I would estimate the cost to be around £50.00 per casting, but given the fact that I am already working on the Flintloque Building Set (see other posts) - which is due for production in February, I am not sure I could fund the initial outlay for the moulds for both of these projects. The rubber is really very expensive.
Should anyone be interested in placing an order please contact me - there is still the possibility that the model will not be cast and I could use it for my 40mm Eureka Musketeer figures. Similarly should any one want to purchase the 'master', please get in touch.
What even happens - I hope that you enjoy this and earlier posts which show how I produce my models.
Tony
Posted by Tony at 08:19