I have decided that my new modelling project for 2010 is to be a collection of 40mm Greek Mythology figures and terrain to be used with the Alternative Armies gaming system Typhon.
This post shows the first models, which have yet to be fully painted and the rule set Typhon. 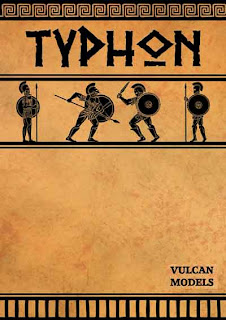 Photo Two - A partially painted Greek Hero from the 40mm Mythology or Heroes of Myth and Legend range by Spartan Games. See;
http://www.spartangames.co.uk/40mm_mythology.htm 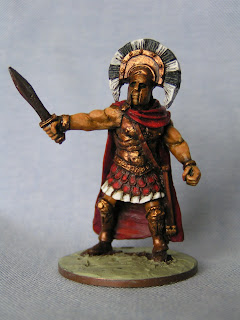 Photo Three - The same miniature alongside a 'bare metal' figure from the Spartan Games 5 man blister pack. A multi piece set with heads, arms and equipment as separate castings. 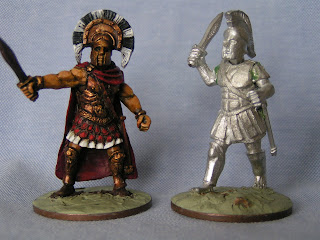 Photo Four - This figure shows the comparison between an Alternative Armies 50mm miniature (on the left) and the Spartan Games 40mm miniature (on the right). The main difference is not height but bulk. I intend using both ranges, the AA Typhon miniature in this case being modelled as a Hercules type hero. (Please note that I have removed the spear from the AA miniature - I will replace it with wire). 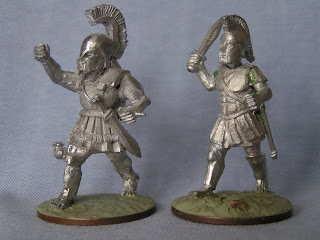 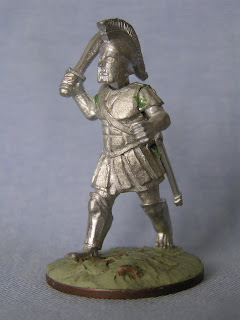 Photo Six - Instead of sticking to the traditional Greek myths, my plan is to use Sword and Sandal books and in particular films as inspiration. In addition I have quite a novel plan for the shield designs. You will have to wait and see! 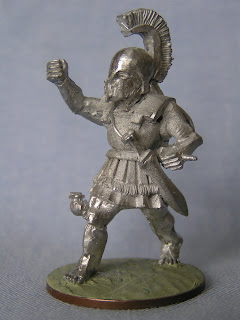 My intention is, in the first place to paint a small warband and a monster or two, then test the rule system. I am being pushed into this new project by Dave at Grand Manner who also has a small band of 40mm Spartan Games Greek miniatures (including skeletons and monsters).
This project is not a priority, however the work you see in these photos has been completed within just a couple of days! As with the Flash Gordon collection I will be scouring miniature catalogues and E-bay for suitable figures to add to the collection.
Tony
Posted by Tony at 04:33

Typhon is a set of skirmish or semi-role play tabletop rules by Alternative Armies (the people who do Flintloque). See; http://www.alternative-armies.com/Typhon.htm

I picked up the rule book just before Christmas and have yet to test them, but I've enjoyed reading the book and feel that the rules are simple enough to pick up in a couple of games and varied or detailed enough to keep you interested. At just £12.00 I also feel they are good value.

The game system is based on heroes leading groups or 5 - 10 men squads against other bands or shades (skeletons) or monsters.

The rules us a 2xD6 mechanic throughout.

I don't feel that I know enough about the rules or have experience of the mechanics to recommend or dismiss them. I'll give a fuller review later.

Also be aware that AA have a Yahoo group called the Notables, which cover Typhon. See; http://games.groups.yahoo.com/group/notablemembers/

Hiya,
very intersted in your Typhon campaign ideas as I recently got a copy of the rules too. I'll be watching this space for developments.
I'm planning on using the 28mm Plastic Hoplites from Immortal Miniatures. The other rules set that I've been looking at is the free 'Battle Troll' set from Wargames Factory www.wargamesfactory.com They are a set for Viking skirmishes but if you strip out the stuff and fluff on icelandic culture the rules themselves cover men with spears, swords, shields, bows and light armour very well.
Anyway, good luck with your project,
cheers, John