An Ogre of Valon

Since starting this Blog there have been many landmarks that have come and gone without any recognition, no comment, no post. Earlier today I saw that Dampf's Modelling Page now has 250 followers and this small landmark just couldn't go unrecognised.

I have been planning for this occasion and had started work on this Ogre conversion to commemorate the 250th follower. The Ogre is a Marauder Miniatures Ogre MM41 and was bought from e-bay some time ago, for more details see this link (bottom right). I have not bothered to strip the metal casting, but instead have removed some of the puffed-sleeve detail and built up the uniform to fit in with my Flintloque collection.

Photo One - Shows the original Green-Stuff sculpting or conversion work. 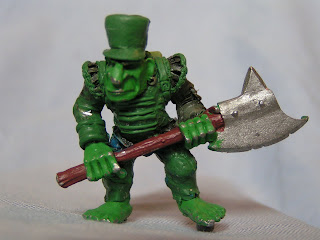 Photo Two - The same stage taken from a different angle. 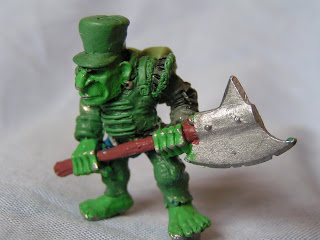 Photo Three - I thought about building up the bare feet into army boots, but decided that my sculpting skills were not quite up to it! 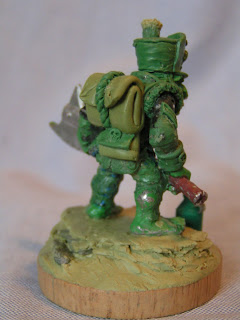 Photo Four - The miniature Ogre based on to a small wooden display disc; the groundwork being built up with small slate scraps and Milliput. The earthenware jug is a Knex joining piece carved into shape and sanded smooth. 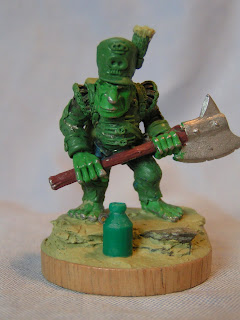 From the offset, I had planned that this model would be a display piece rather than a gaming miniature. I have therefore spent a little longer than usual on building up the base and adding texture.

The model is supposed to depict an Orc Sergeant of the 'Buffs' serving on the Cataluchian Front sometime during the early Mordreadian Wars. He is armed not with a Flintloque, but with a vicious pole-arm axe, a favourite weapon of Orc Sergeants from this period. His uniform is showing some signs of wear which again was common following the ill-fated retreat from Kooruna.

Further posts will detail the final bits of sculpting and how I painted him. Thank you to ALL of my followers and just as importantly thank you for your comments - they are greatly appreciated.

Beautiful! This guy is going to make a beautiful display piece!