In part one, I showed the different steps in building this simple village pump and trough.
Photo One - Shows the well finished and fully based. For completeness the groundwork is built up with DAS modelling clay and the additional texture is various stones, sieved sand and fine sand applied over uPVA glue. I tend to use my own mix rather than a propriety brand and add it in steps; first the larger stones, then the sieved sand, finally the fine sand. 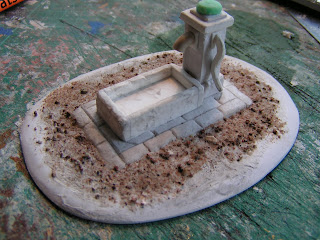 Photo Two - The well painted in a mix of Scorched Brown and Black. 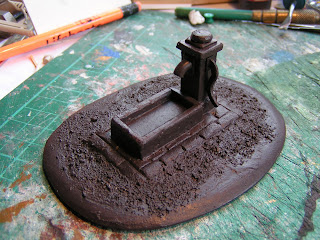 Photo Three - The first highlight, a blend of Scorched Brown and Snakebite Leather, loosely drybrushed with a large brush. 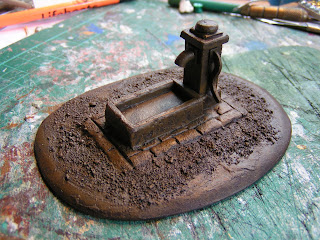 Photo Four - I wanted to stay away from a Grey or Granite coloured well and went with a warmer, honeyed stone colour. The second highlight is Snakebite Leather again drybrushed. 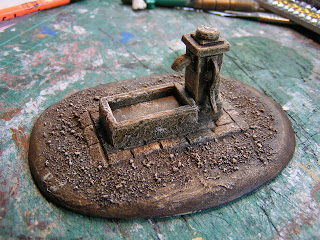 Photo Five - The metalwork was painted in dark brown then highlighted in various metallics to give a bronze effect rather than cast metal. The water is painted, first black, then Midnight Blue, then Enchanted Blue to give some 'depth'. You will also see that I have highlighted some of the larger stones with black/white to give some grey stones. 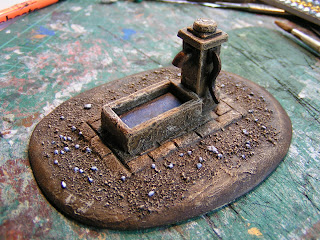 Photos Six and Seven - Two images showing the finished and varnished piece - I used Galleria matt varnish and then added railway scatter material to the edges of the base. I have also glued three static grass clumps down with uPVA glue and gloss varnished the surface of the water. 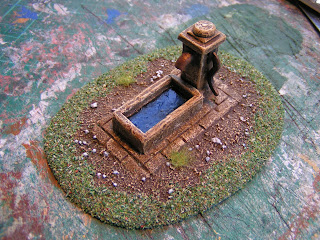 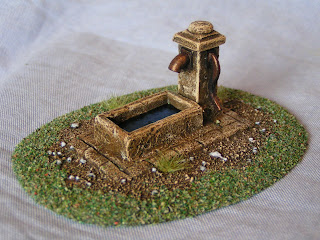 Photo Eight - Yet another image of the finished well. This time with a converted Flintloque (28mm) figure to give an idea of scale. 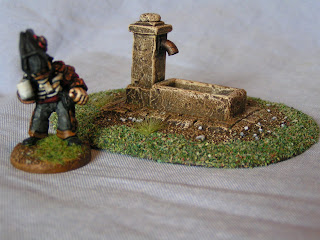 Photos Nine and Ten - A different well/pump that I built some years ago. This time built from strips of Balsawood and mounted onto a much smaller gaming base. This well was inspired by a fantasy well shown in early White Dwarf magazines. 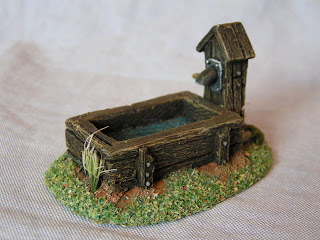 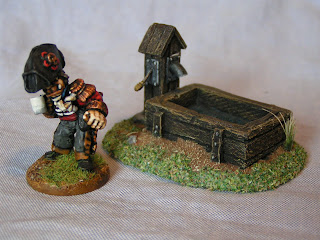 Having agreed to write a number of Masterclass modelling tutorials for the online magazine Barking Irons Online I have been building up a wide range of new Flintloque themed terrain pieces. This simple stone well was intended to be such a Masterclass, but I have since started work on a larger and more ornate model which should feature on BIO very soon. When I have more details I will post links.
Tony
Posted by Tony at 00:55

I think this simple village pump design looking superb, new designer of plastic card should follow this work for their best designs.

A very useful step by step approach as well.

Brilliant! I've been looking to make something like this for ages but didn't know where to begin.Cheers for sharing these great tutorials.