I have commented in earlier posts about my intention to clear some of my large lead mountain.  This post shows the latest additions to my 40mm Flash Gordon collection - a group of three Dracci or huge Lizardmen/Dragonmen.

Photo One - The group of three Dracci.  The miniatures are from Alternative Armies Dracci Lords (95541) and are huge miniatures standing over 55mm tall. For more details see this link 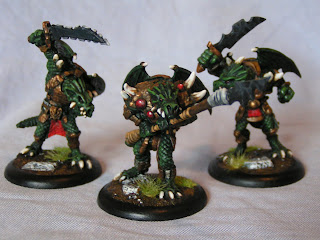 Photos Two, Three and Four - Detail images of all three Dracci.  Each figure in mounted on to a 40mm round base with the groundwork built up from portions of broken cork and Milliput.

The Dracci miniatures are quite fantastic sculpts, full of character and beautifully detailed.  The only issue I had was the Dracci with the spear had a miscast tail and needed a little bit of Green Stuff to repair the lost texture.

All three have sat on my 'too-do' shelf for at least a year (maybe longer).  It is great to see them eventually painted and varnished. 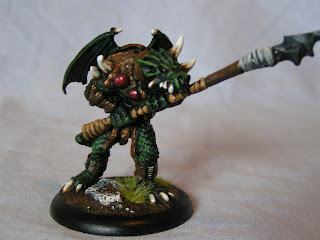 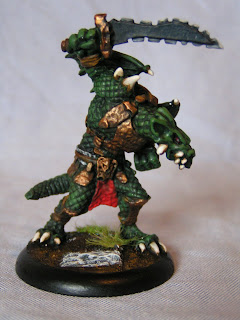 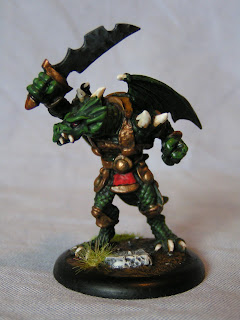 Photo Five - A simple image showing a 40mm Graven Images/Cliffhanger Mongo Trooper also mounted on a 40mm round base next to the tallest Dracci Lord to give an idea of how tall this model is. Each Dracci would 'tower over' any 28mm/30mm figure. 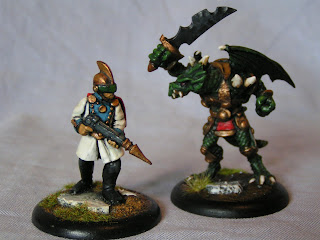 Photos Six and Seven - The 40mm Flash Gordon collection started many years ago with just two models - Flash and Ming, since then it has grown to over 100 miniatures with figures from loads of different manufacturers most mounted on to 40mm/50mm round bases.  These two images give some idea of the total collection, currently housed in a simple white drawer. For larger images, just click on the photos. 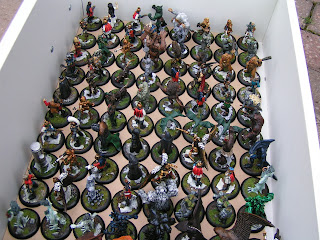 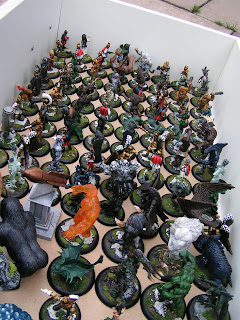 I am sure that I will add to the collection over the next months, but for now it is pleasing to be able to show the whole group.

PS.
I am ashamed to say that these Dracci models have stood primed and un-loved for over two years, see this post from May 2009.
Posted by Tony at 11:12

Spectacular collection! I would love to see some more detailed pics!

Most (if not all) of my Flash Gordon collection is recorded on this Blog - Check out FLASH GORDON Label for more.