Prince Vultan Leader of the Hawkmen - part one

Following on from earlier posts, here is the latest addition to my 40mm Flash Gordon collection - Prince Vultan, Leader of the Hawkmen.

In this post I have detailed the construction of this miniature, what figures were used and some of the background to this character model.

This is the third Vultan I have attempted to sculpt - the first two being consigned to the bin!  I have wanted a Vultan for some years and have been building up quite a collection of parts in preparation for this project. I have based the figure on the three most iconic Vultan images; Alex Raymond's comic strip, The original Buster Crabbe black and white cinema serial and Brian Blessed in the 'Queen soundtrack' Film from the 80's.

Starting from the bottom the figure is constructed from;
A 40mm Privateer Press round base (with some additional lead weights hidden beneath the lipped base).
A base of 1mm plastic card to raise the figure and give it some height.
The legs are from a Denizen Miniatures Giant figure bought off e-bay.
The chest and arms are from the 40mm Spartan Miniatures Hoplite blister pack.
The mace is a round topped dress-makers pin running through re-modelled hands.
The head is a Rasputin head from Graven Images (part of the Hellboy limited edition set).
While the wings are from a 28mm Harbinger figure given away free with subscriptions to Harbinger Magazine (now out-of-production).
Plus loads of Milliput and Green Stuff.

Photo One - The completed Prince Vultan - Leader of the Hawkmen awaiting paint. 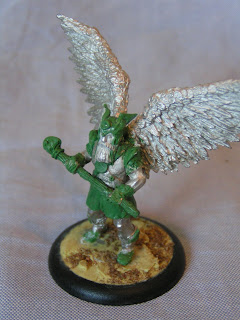 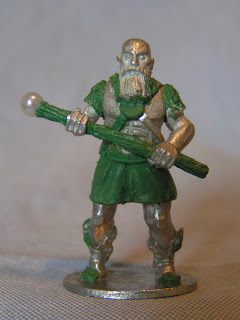 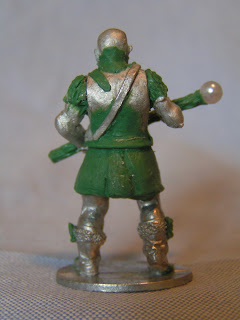 Photos Four, Five and Six - Based and detailed. Awaiting the modified wings. 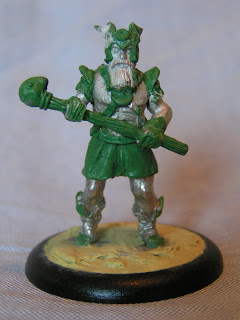 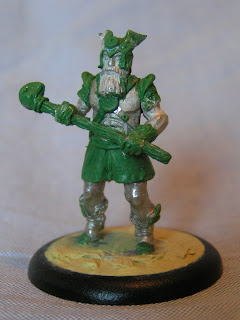 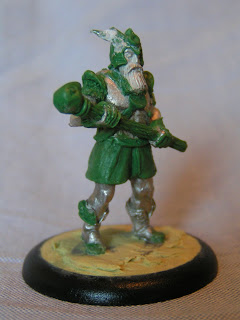 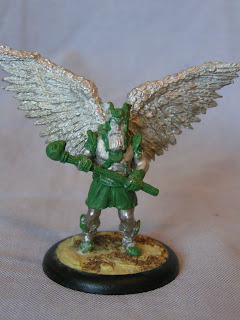 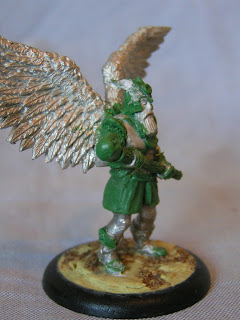 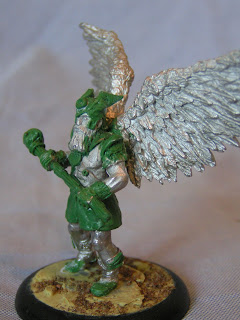 Photo Ten - Another image of the finished model which stands 42mm tall (base of feet to top of helmet) and 78mm wide (across the tips of the wings).  I have purposely mounted the model towards the front of the round base to offset the weight of the metal wings. 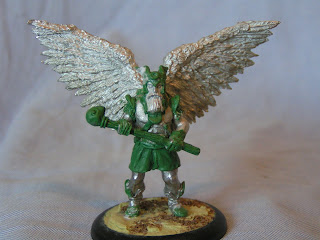 The modelling and sculpting has taken a full week of evenings with most of this time being spent waiting for the Green stuff to fully harden.  I have no plans for painting this miniature straight away, but promise to keep the Blog updates with developments.

It is great to see the Flash Gordon miniatures back in the spotlight (one of the reasons why I first came to this blog)!

Great job on the fig! Al;most ready to...

Thank you for the comments - I also think that I should apologize for the lack of Flash Gordon posts over the last year.

I am currently working on a couple of models that should be ready for posting very soon.

Impressive, good work with the green stuff. Just getting to grips with the stuff myself, so you have my admiration for a job well done.

Top work Tony, looking forward to seeing him in all his painted glory.