This is a model of the great Dwarf hero Baldur and was built on a whim after I picked up the Galactic Warriors model from a charity shop in Pershore for just £2.00. 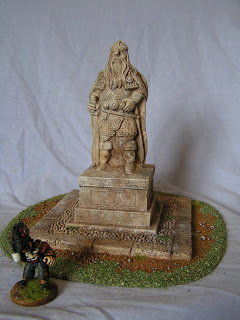 The box was in very good condition with the white resin/plaster model wrapped in bubble-wrap, a paint brush and some small pots of acrylic paint were included (see packaging). 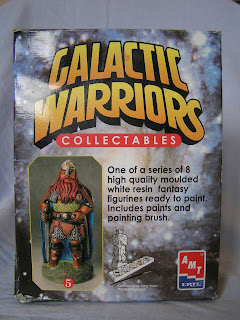 The model is really too tall as a 28mm scale statue, towering over my Flintloque miniatures, but this is a project I have been looking at modelling for some time and Baldur was a very famous Dwarf - so a large statue seems fitting. 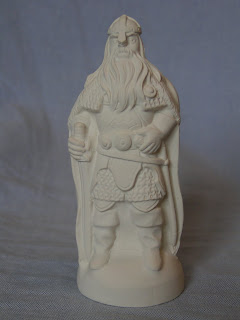 The plinth was built up with plastic card over a small wooden block.  I removed a disc of resin/plaster from the base of the model - a good 10mm and mounted this into the plinth (rather than on top of it).  The base of the figure was then 'blended-in' with standard Milliput. 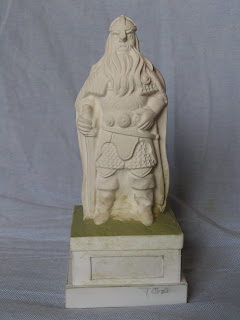 The base was further detailed with strips of Wills cobbles (textured plastic card). 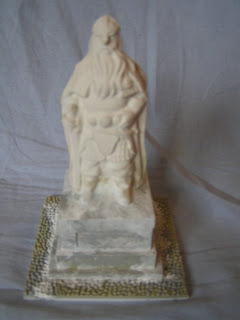 Here you see the base and cobbles in greater detail. The additional texture on the plinth is acrylic texturing medium/acrylic paint with some very fine grit added. I was originally not going to add a separate base, but at the last moment mounted the whole statue on to an oval of 3mm thick plastic card. This was further textured with sieved sand and fine stones. 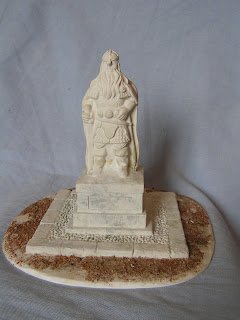 As above, but from a different angle. The boundary stones are 3mm thick plastic card cut into to strips and textured with a large rough stone from the garden - I press the stone into the plastic card which gives just the right amount of surface detail. 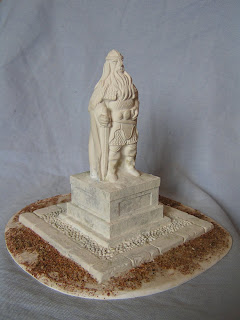 The whole model was first painted white and then washed with a very dilute Burnt Umber craft paint.  The base was painted with GW Snakebite Leather and highlighted with Snakebite/Skull White.  Some of the larger stones were picked out in Grey.  I have varnished the whole model, plinth and base with Galleria Matt varnish. 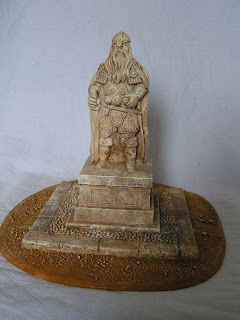 The Statue mounted, painted and flocked. 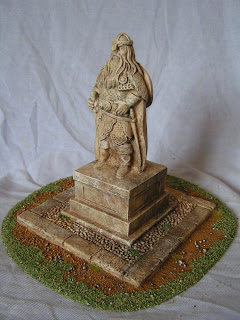 I have no idea how this statue will be used in my games of Flintloque.  As stated above, once I saw the figure I just knew I had to model it!  I hope that you like it.