The nine Todaroni from Alternative Armies are now based. I have used my usual 2p coins and built up the groundwork with standard Milliput. The bases have been further detailed with some sieved stones and fine sand which was laid over uPVA glue.

I have already commented that the miniatures needed very little tidying up, however (just because I like customising my figures) I have added Greenstuff buttons to each of the cuffs and some more to the uniform turnbacks. These were modelled with small beads of Greenstuff applied over a spot of superglue.

Photo One - Shows the main Todaroni troopers, based and ready to be undercoated. 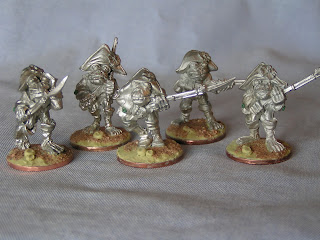 Photo Two - The two command figures and a trooper, remember that the 'singer' was not included with this particular 'second-hand' set. (See earlier post). 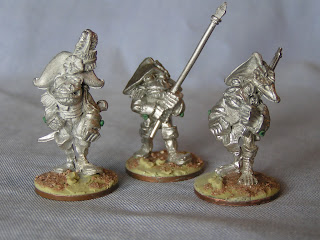 Photo Three - There has been some comment on The Notables Yahoo Site about the fact that without the singer, "how could you keep up the morale of these troops?"  The answer is that this particular regiment has gone back to the 'gene pool' and enlisted the help of this young 'Kermit' a soprano.  Although very new to regimental life, Kermit is proving a winner with his colleagues and we have great hopes for him.

The frog model is from the Games Workshop Morgan Lefay Enchantress set (the one where she is sitting on a Unicorn) and in this instance is mounted on to a 1p coin as the 2p would have been a little large for this small single figure. The groundwork is once again built up with Milliput and detailed with sieved stones and sand. 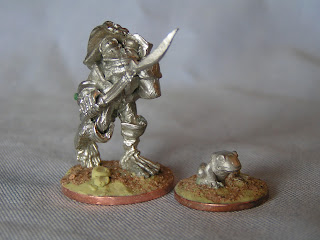 In the next post, I will gives details of the undercoating and then the painting, proper. Stay tuned for more 'froggy goodies' and as usual, should you want to see larger images, just 'click' on them.

Brilliant miniatures. They ache to receive a proper flag, some nice swap basing and lots of green paint.

I have some inspiration on my channel or you chap!
http://www.youtube.com/watch?v=XbvafW6gkug&list=UUDxk8yU6VLejXVwAYkp4znA&index=2&feature=plcp

Love the toads! Can't wait to see some paint on them.

Looking good. I'll have to go some to get an army like this one.

Great work so far. I look forward to seeing them all finished with your usual flourish.