The Pledge for June is Finito (properly finito) based, varnished and flocked.

Photo One - "Just for Gavin" - an in-game shot of the dashingly dressed Todoroni unit, 2o Bellalugosi Line from Alternative Armies 56505 taking some refreshment from a local well during a lull in the battle. (Something that happens quite often with this regiment). 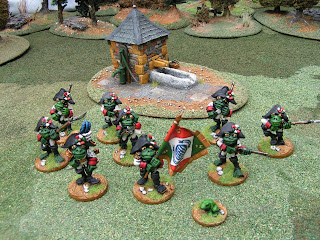 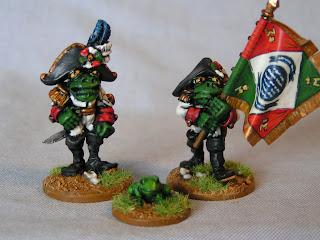 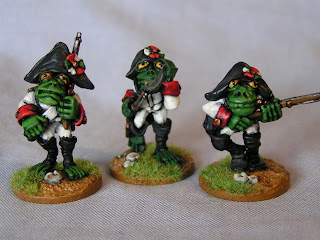 The groundwork was painted GW Snakebite Leather, then highlighted with Snakebite/Skull White and washed with Badab Black from GW. When fully dry some of the larger stones were painted with a Chaos Black/Skull White mix.

The miniatures were first varnished with Ronseal Gloss Varnish and then two coats of Galleria Matt Varnish. The flocking was added over spots of uPVA glue. 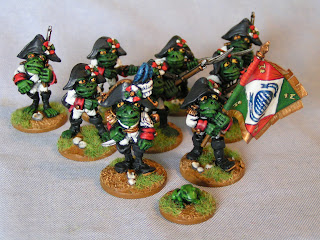 Photo Four - A close up of the Standard Bearer with hand painted, custom flag. I am particularly pleased with this miniature who is just full of character. 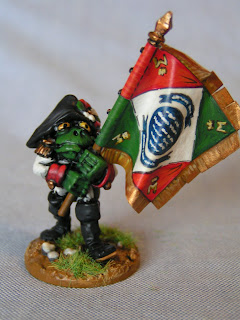 Finally, I have added the eyes - small dots of Chaos Black which were then gloss varnished.

This is the first Todaroni Regiment I have painted and they were great fun to paint, so much so that I might just do a second one.

Thank you for Photo one Tony!

I love to see your finished work on the table and amongst the background of scenics and terrain pieces.

Very nice work and one of the best incarnations of those miniatures I have seen.