Craig Andrews of Barking Irons Online has promised to publish part two of the Flintloque story/scenario Getting Ahead this Friday, part one (which was originally published for Halloween 2011) can be found here. In the meantime I have written this short modelling article detailing how I converted some Flintloque miniatures into Headless Zombies. The full article can be found here.

I am looking forward to seeing the second part of this unusual gaming scenario in print and will update this Blog once I have more information.

Photos One and Two - Show the eight converted miniatures painted and based. 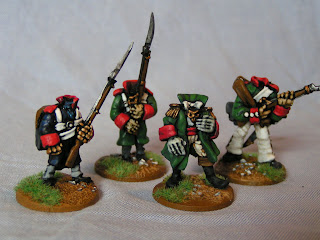 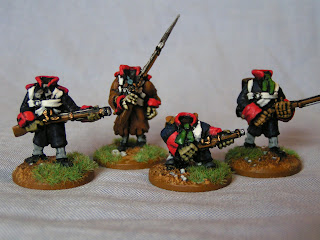 The original idea came about in early 2011 and although it has since been split into three shorter stories/scenarios, it has been patiently waiting to be published since then. I hope you enjoy them.

Hah! These are great!

I am looking forward to reading the article and also on seeing these miniatures. I did not read it when it came in so it would be fresh for me.

Wonder how they bite the cartrides in order to load? : )