These images show one of my many stalled projects.

Originally I had looked a producing a small collection of themed miniatures to support a new project. Details later on.

Image One - A converted and modified Plastic Wolf from Games Workshop. I wanted a 'beast' of a hound and have used both Milliput and Green Stuff to bulk up the model. 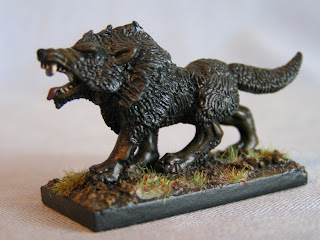 Image Two - A much modified Games Workshop Rat Ogre, converted with Milliput and Green Stuff to build a huge mane and model this Lionman. A real brute of a Lion.

Any ideas as to the theme yet? 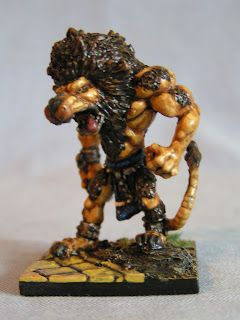 Image Three - Finally in this set, a Robotman or more particularly, a Tinman with and axe. The model is based on a Superheroes Bot which modified legs and torso. The axe is a GW plastic axe on a scratch-built tree trunk. I have painted it as a much-worn Bot. 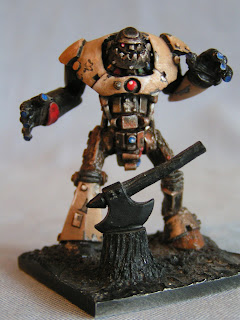 Image Four - Shows all three together. As you can see the bulk of the painting is complete as well as being varnished with Ronseal Gloss Varnish, however there is still some detail painting and flocking to be done. 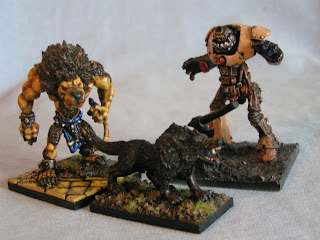 By now you should have identified three of the main characters from a Steampunk or Dark Fairytale Wizard of Oz; Toto, Lionman and Tinman. I had planned on a Dorothy figure to accompany them, but have never finished the set.

The three miniatures have now been sold via e-bay.

Labels: Other Modelling Projects, Others, Personal