The Long and the Short of it

Huzzah, Huzzah and double Bang On. Craig Andrews at Barking Irons Online has uploaded part two of the three part Deadloque inspired short story and gaming scenario entitled 'The Long and the Short of it.' For full details go to this link. Part One called 'Getting Ahead' was published back in October 2011 and saw the introduction of a new character - Commissar Margahrah and his loyal group of Ferach Militia. The first short story and initial scenario can be found here.

In addition a separate modelling article featuring details of how I converted a group of eight standard Flintloque miniatures in to Headless Zombies can be found here.

Let us hope that part three - the conclusion will not take as long to be published. 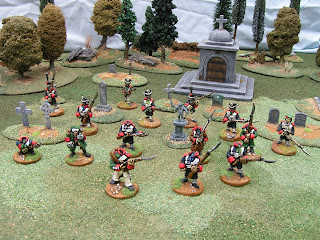 The original inspiration was taken from a book on English Folk tales and was intended as a short story for The White Liar series - also featuring on Barking Irons Online. As the story grew, I knew that it deserved to be extended and turned into a set of linked gaming scenarios. Craig Andrews (editor of BIO) has waved his magic wand over my scribblings and notes to produce this second story and scenario - thank you Craig.

The composed image of both 'normal' zombies and the headless variety above was taken last month to illustrate this story. It shows Witchland zombies emerging from a small graveyard.

I know that part one (Getting Ahead) caused some considerable interest here on this Blog. I hope that you enjoy part two just as much.

Very cool! I've yet to play the rules, but would love to try it out. Best, Dean

It was a pleasure, as always, creating this adventure with you. It had a pretty major eleventh hour overhaul as my first drafts didn't seem quite right (as I'm sure you noticed if you compared this to the original map I sent you).

Things in the BIO schedule are pretty manic to be honest with the new continued support for HOFFT and my existing submissions list. I did however, really enjoy writing up this adventure. The prose sections just felt right.

I'll tell you what, if you can get fifty people to post here with their thoughts, likes and dislikes on Chapter's One and Two here I will bump Chapter Three (The Hunt) up the schedule, give it the magic wand treatment and post it on Monday 30th July. Think of it as a mini-Kickstarter-esque pledge system but with no money changing hands :) Fifty reviews of Chapters One and Two posted here and we'll see Lodemai and Margahrah a lot sooner...

Barking Irons is down at the momenet - couldn't handle the load? ;-)