Alternative Armies have been running a Name the Miniature Competition on The Notables Yahoo Group site, for full details go to this link and to Gavin Syme's personal Web page, here.

This is the model, an unreleased Trolkin Colonel by the name of Skand Stoyne, a real brute of a miniature beautifully sculpted by Rob Alderman. A miniature that reminds me of the late Les Dawson. 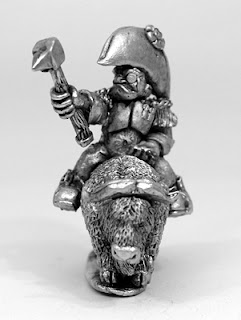 My own entry (writing a backstory for this character model) is included below and although going over the allotted 200 words, I hope that it is successful.

For your entertainment here is my short story. I hope you enjoy it.

The Troll-Mother had promised that she would take her two young Trolkin to see the new museum, a museum dedicated to that most famous son of Stoyne – Colonel Skand Stoyne of the Trolkin Militia.

The museum had only recently acquired the third of three artefact all generously donated by that fine rock of the community Skand Stoyne and Colonel in the Kyngs Own Rifles Militia.

The first exhibit was placed on a small velvet-covered plinth and had chiselled on a piece of slate;

Portion of the nose of Colonel Skand Stoyne.
During a sword duel Skand’s opponent had called a truce to say that Skand had a fly on his nose. His reply was; “You knock it off, you’re closer than I am.”

This is the shard taken off the nose during the duel.

The two Trolkin hollered with glee as they also tried to knock portions of noses off one another. The Troll-Mother moved them on to the second exhibit, a Brass door knocker;

Again chiselled into a much larger piece of slate was the following;

Nipple ring, ripped from Skand Stoyne during a boastful challenge with Mica Schist (a colleague of Skand).

While walking home after a night drinking strong ale and eating concrete hardened ground bread Skand and Mica argued about who was the stronger. Skand said that for two Krone he would throw Mica across the ice filled river and on to the other side. The challenge was taken up and Skand swung Mica around his head three times before launching him across the river.

Mica landed in the middle of the river and amongst the ice flows. “You missed!” was Mica’s response. To which Skand replied – “I dina say I’d do it first time!”

On the third attempt a dizzy Mica grabbed at Skand’s uniform pulling of his nipple ring, which due to Trolkin being larger than Orcs or Elves had been fashioned from the brass door knocker from the White Liar Tavern in Broomcoat.

After some embarrassing question about “Why did he have a brass door knocker nipple ring and do you have one?” The Troll-Mother was pleased to have a short rest as the curator took over and told the two youths about some of Skand’s military career.

As the olde Troll-Mother sat, she reminisced about her own youth and the times when she and Skand had searched the mountains for moss covered boulders. The right moss or algae could cause the Trolkins to hallucinate – get stoned. As she sat on a cold marble bench the second symptom of eating too many sharp mountain boulders in her youth began to trouble her. Her haemorrhoids –small pebbles which irritated and caused her discomfort began to throb. Had those hallucinations been worth it? Did Skand suffer in the same way?

As the two Trolkin youths began to play up. The Troll-Mother rose and made her way to the third exhibit. A new exhibit only recently acquired.

What has Skand donated this time?

As she peered at the latest display, one of her charges screeched. “Piles. Look - piles of pebbles!” The Troll-Mother quickly ushered away the children before they could read the third stone slab.

Armed with a huge stone club which Skand finds easier to use than a mere Marshals batten.

Skills and Bonuses.
Like Granite; (super strong skin) and able to fend off musket balls fired at any range longer than Medium as well as able to break swords that are not defined as Super quality.

Stand like a Rock; Acts as a banner to any Trolking within 12 inches.

Faults and Forfeits.
Terrible temper; (those piles can be painful).

Boulder Age; Due to his extreme age he is less mobile and moves (on foot) at half rate. Trolkin as they get older revert back to solid stone and eventually turn into boulders themselves.

Every game there is a chance that all that Algae will have some effect.
Roll a D6 at the start of Skand’s first encounter and if 1 turns up. Skand will hallucinate.