I recently read a post on one of the Wargaming Forums, asking for details of the largest piece of terrain you had made. This is not the largest but at over 48cms tall it is definitely the tallest.

The Wizards Tower. Built from DAS modelling clay over a cardboard tube (the sort that carpets are rolled around). Each stone block being first flattened then textured and then added over uPVA glue. I remember modelling about six small stone sections on to flat card to test the technique prior to adding any to the tower.

The stairs are cardboard, folded into steps while the roof tiles are DAS built up individually. The smaller roof tower is built around a toilet paper tube. 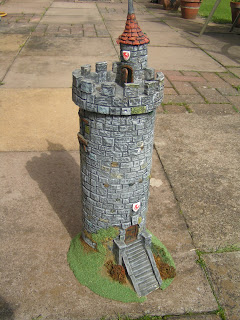 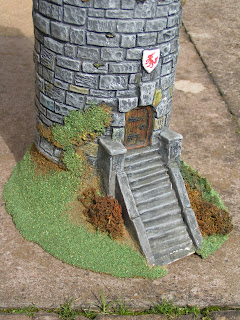 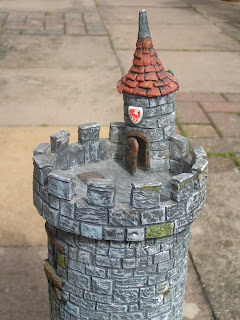 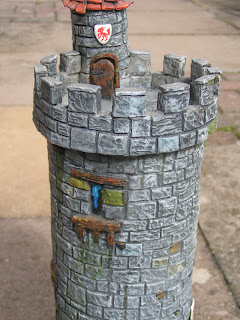 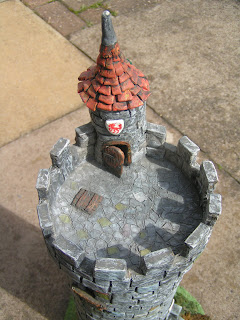 The model is well over 25 years old and rarely sees the light of day - being stored in the attic. I did touch up the white shield areas and re-flocked the base for this photo shoot as these two areas were showing their age.

As a modeller, I think there are many things I would have done differently on this model, but there is no doubt that it is sturdy having survived three house moves and being seriously neglected. DAS models do last!

My wife reminds me that during construction, I left the model on our new G - Plan sideboard, the DAS still being slightly soft - Many years later the sideboard (plus the white bloom mark) is long gone but I still get reminded of it every time she sees the Elephants Foot (her name for the tower).

Fantastic! I gotta try making one of those

I would love to see how you did this all those years ago. Lovely stonework and perfect for so many games.