Earlier today Sue and I drove down to Cheltenham. It was my revised day off and we had decided to make a day of it and visit the lovely town of Cheltenham in the glorious summer sunshine.

After a brief browse around our usual haunts, I peeled off to visit the Oxfam Book Store and see if there was anything there that took my interest.  There were a number of books in particular some Japanese language Studio Ghibli art books and a wide range of graphic novels but all too pricey for my wallet. Never-the-less I did pick up a second hand copy of White Dwarf 384 from December 2011 for 99p plus a small pamphlet on Folk Tales from Scotland.

Regular WD readers will know that for a period last year and earlier this year WD was not available from WHSmiths and for what ever reason I had not been interested in searching it out. Plus, and I am not being a Games Workshop knocker when I say that I believed I had well and truly out-grown it.

It is with some humble pie that I have to comment on how much I enjoyed this edition. 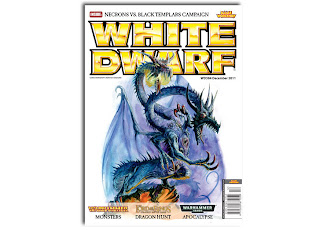 After a break of about a year, this was the first White Dwarf I had picked up and I really enjoyed it.

Of particular note was the article by John Blanche, an article that I found myself agreeing with 100%. In which John comments on how he has decided to not follow The Heavy Metal Style of painting miniatures but stick to his own tried and tested painting style/technique. Hear, Hear. (I suspect that I will return to this subject in a future Blog post).

Later there is a 6 page tutorial on painting GW Terrain kit Skullvane Manse which should provide a great deal of relevant hint and tips for some of my forthcoming terrain building and painting projects. The article as well as being very well illustrated offered some hints for all terrain painted.

Just a couple of pages later is a similar Modelling Workshop article detailing the painting of an Ogre Thundertusk which offered a very well written tutorial on painting this large monster - it also offered tips that could and should be of use to any miniature painting student.

I also enjoyed the short article on painting the Tau Piranha.

Finally, there was another article of interest to me, The 'Eavy Metal' pages that launched the Eavy Metal Masterclass book that I picked up late last year.

A number of the painting articles talked about the use of the old-style Citadel washes, one in particular about using them over a 'Block Painted' figure - similar to the style that I had attempted with Bange and Oafson the Trolkin Brothers (see earlier posts). The article was so well written and illustrated that I am tempted to re-try the test of Block Painting and Citadel Washes just to see if I had been a little too fast to condemn this style of 'simple miniature painting'..

So there you have it, a modeller that had well and truly turned his back on this iconic modelling magazine now writing about how much he enjoyed this particular issue and how so many articles held my attention completely. Something that I had not expected.

I suggest that if there are other who felt the same as me - this issue White Dwarf 384 from December last year might be worth a second look.

I noticed as I was writing this post that this issue of WD was printed in Poland. Was this the reason that WHS de-listed it?

I think GW has been printing the UK WD in Poland for quite some time now, but the reason it was no longer in Smiths is that GW decided to it from Comag distribution, not from anything Smiths decided.