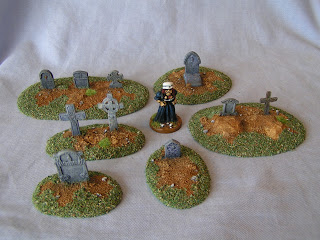 Another Terrain Masterclass from the old Barking Irons Online web pages which were lost when the BIO site closed down. It is reproduced here in full.

In previous Masterclasses I have detailed how I built and painted various pieces of ‘scratch-built’ terrain. This weekend after a busy couple of days in work, I just wanted some fun. A simple modelling project that was not going to tax me. Searching through my ‘bits box’ I came across some white metal castings of headstones that I had purchased last year. The models were sold with plastic bases and cost no more that £2.00 for the whole set. I had bought them to build a larger graveyard, maybe even a themed terrain board, but as with many modelling projects – the impedes had disappeared and the models were now doomed to be scrap metal. That is until I decided to base and paint them. 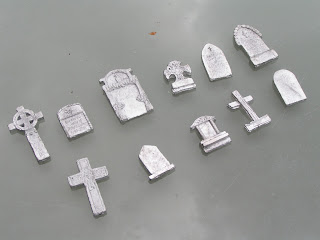 Originally there were thirteen pieces (plus bases) but I had already cannibalised one model and the others were destined for the same fate. 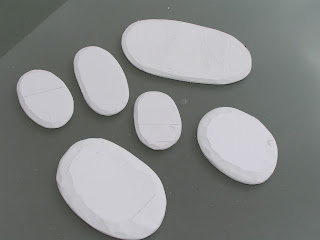 I cut six simple ovals of plastic card, some 3mm thick and others 5mm thick. Then chamfered the edges by trimming with a knife and sanding with a sanding stick. 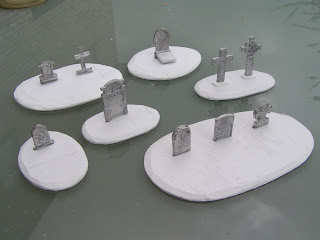 With nothing more than superglue I stuck down ten of the thirteen metal headstones. As you can see there are three single headstone bases, two pairs of headstones and one base of three headstones. 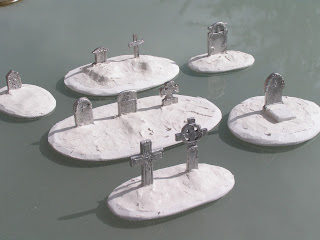 The groundwork was built up with DAS modelling clay laid over a layer of PVA glue. The bases were only roughly textures as there would be further layers added later on. 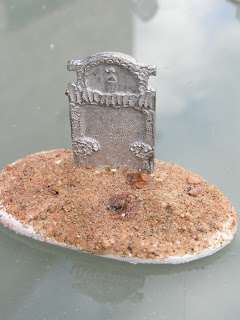 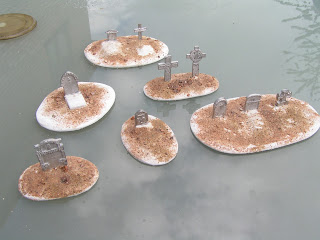 The texturing was simply sieved sand and fine grit over PVA glue. Where the glue looked weak, I have added some thin superglue. 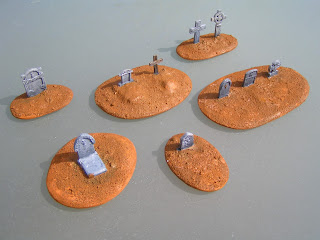 The basic groundwork colour was Snakebite Leather from GW with various greys for the headstones. I have tried for some slight variation in the colour of headstones by mixing-in blue, black and grey. 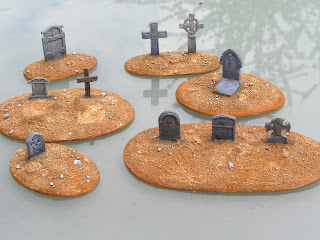 Drybrushing has brought out all the base textures and I have also picked out some of the larger stones with a mix of Chaos Black and Skull White. 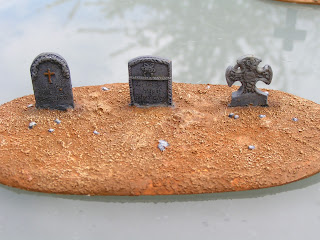 A close up shot of the three headstone base. 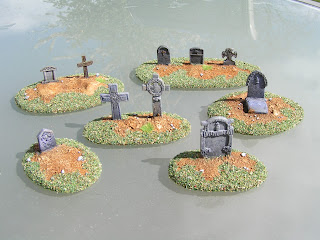 The six bases (ten headstones) taken in glorious sunshine, showing the basing finished. I have used my usual dyed sawdust with the occasional spot of static grass to add texture and 'colour'. 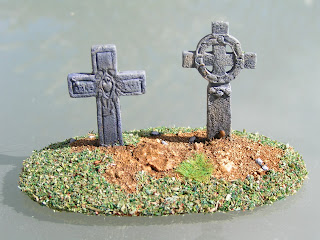 Yet another close up. 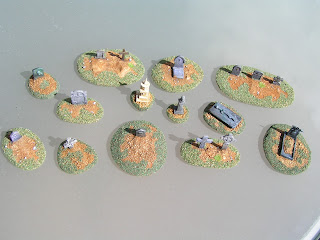 This image shows the new headstone bases mixed-in with some of my older ‘scratch-built’ plastic headstones. There is a difference of over three years between these two sets, but the older models have held up well during this time. Following this shot, I re-flocked the bases of the earlier headstones to refresh the dyed sawdust basing. 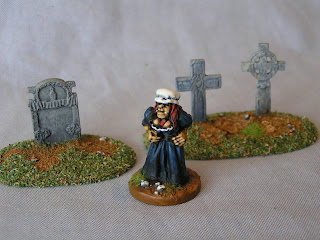 Finally Chastity (a Flintloque character model from Alternative Armies) and two of the headstone bases.

From start to finish these six simple models have taken me about four hours work and cost less than £2.00. I am certain these headstones (and the older sets) will be seeing action in both Catalucia and The Witchland over the next year.

Finally, I thought it would be worth stating why I had decided to mount some of these headstones on multiple bases rather than singly.

I had in the past always based these simple models singly, however experience has shown that a mix of single and multiple bases is the better course of action, allowing small single bases when needed and multiple basing when larger full table coverage is necessary.  I have no real preference as to which is better; I just think a mix of the two styles makes more sense.

There is no reason why you shouldn’t have a similar collection of headstones – as there are now plastic sets available for just a few pounds and there is always the option of ‘scratch-building’ a set. Plus a graveyard in Flintloque or Deadloque is almost a pre-requisite as far as themed terrain pieces are concerned.