The Chapel at Rofenburg - part one 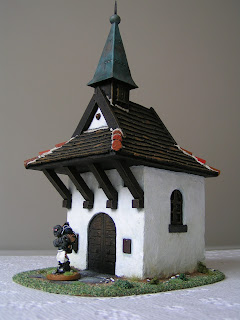 Today I have had a really productive day tidying up the shed-at-the-bottom-of-the-garden and getting to Skype both grandchildren. The weather has been glorious and I've enjoyed being in the back garden working hard and listening to music.

In these troubled times I have decided to search through by back catalogue of articles/tutorials and revisit them with new and revised comments. The first is this model of The Chapel at Rofenburg which originally appeared in Miniature Wargames 355 and 356 in 2012.

The original inspiration came from a tourism brochure that I picked up in a local charity shop. The brochure had many images of Lichtenstein and this quaint white-washed chapel inspired me to build a Flintloque scaled model.

The image below was cut from the brochure and I sketched up this rough plan. Even back then I was always trying to build models that would fit in a 6 inch x 6 inch x 6 inch box! I should also add that I have dozens of sketch books filled with similar images and plans - many more than I could even hope to model. 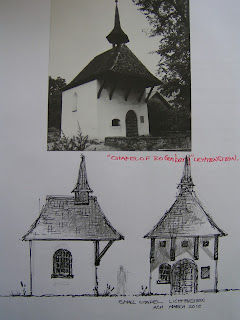 The doorway height and windows were scaled against a Flintloque RifleOrc as I find this easier and more realistic than sticking to predetermined and strict door measurements. In the past I have been criticised for not including detailed measurements of such features, but as I don't stick to any detailed measurements - I'm OK with the criticism.

The layout (below) was drawn onto corrugated cardboard and as you can see - there were some adjustments. 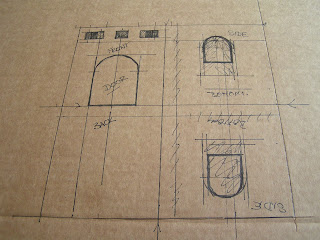 In my next update, I will show how the core building shape was cut out and glued together. In the meantime - stay safe and

Fabulous looking forward to this